How to Switch Netflix Region With Fast Free VPN

How to switch Netflix region or country? The article offers a practical way to change region on Netflix with a fast VPN free to enjoy Netflix streaming no lag.

Netflix, a streaming service with a large variety of TV shows, movies, anime, and more, is available in over 190 countries around the world. But logging into the Netflix account, you will view dissimilar catalogs of shows and movies in different countries. Still, the county on your account can’t be changed unless you move to a new country, according to the Help Center of Netflix. Even though, there are methods to help you change region on Netflix without moving to another country. Read the blog to know the feasible way about how to change Netflix region and view any shows or movies without geographical limitation. 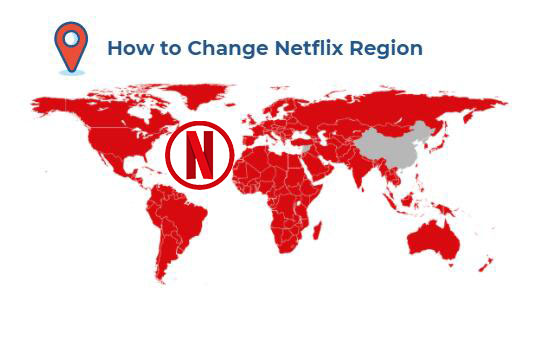 How to Change Netflix Region with Free VPN | Overview

The fastest and easiest way to change Netflix region or country is to use a VPN to change your IP and access different libraries. How to choose a proper VPN to prevent being blocked by Netflix? iTop VPN is what exactly you need to get access to Netflix streaming service bypassing geo-restriction, and easy to use VPN for Windows, Mac, Android, and iOS,

iTop VPN has more than 1800 VPN servers in over 100 locations worldwide, allowing you to get private access to the global internet in one click. That means you can change your Netflix region or country as you wish and watch Netflix with lightning-fast speed. Dedicated streaming servers are not limited to Netflix. Disney+, Amazon Prime, Hulu, Paramount, and more streaming servers are accessible. More dedicated servers are distributed for P2P, social, and gaming.

You May Like: Best & Permanent Free VPN for Netflix USA >>

iTop VPN stands out in the industry for many reasons, the main of which includes a strict no-log policy, fast speed, and protect your privacy in all aspects.

Privacy is guaranteed as it applies best-in-class encryption. Whenever and wherever you surf the internet, a VPN connection enables you to avoid government censorship, ISP interception, and hacking. Using the iTop free VPN version doesn’t require signup and login unless you upgrade to the VIP version. Besides, it obeys strict no logs policy. Any of your data will not be recorded or stored by the free VPN client. Kill Switch feature protects your info from being leaked when your VPN disconnect accidentally.

To enjoy high-resolution streaming, it’s better to stop running other apps or surfing the internet. But in most situations, people generally run 3 or more apps in the background for specific purpose. iTop VPN allows you to use the split tunneling feature to add apps or browsers to whitelist which data will be encrypted with VPN and others use the local internet. In this way, you can enjoy Netflix live streaming without lag or buffering.

IPv6, the most recent Internet Layer protocol, provides end-to-end datagram transmission across multiple IP networks. It ensures traffic to be routed to the correct destination. Compared with IPv6, it is safer, gives a larger addressing space and makes multicasting possible. Many iTop VPN servers support IPv6 connection, making it one of the best free VPN for Windows.

For those people who pay much attention to online privacy and safety, VPN is indispensable. The VPN free allows you to configure your IP address according to your needs. The first option is to choose the auto mode to connect the best server IP fast for gaming and streaming. The second is dynamic IP, which allows you to connect to different IP addresses every time you connect the VPN. It is suitable for those who don’t want to be tracked by ISP or hackers. The last is static IP, which means you connect the same server all the time to avoid verification triggered by different IP when logging to Gmail account, Facebook or other platforms.

More advantages of using iTop VPN to change Netflix region are waiting to be explored by yourself.

How to Change Your Netflix Region/Country | Detailed Steps

Netflix has the largest Netflix library in the US, followed by Canada, the United Kingdom, India. So you can turn your Netflix region or country to the US to enjoy a large number of popular TV shows, videos, or documentaries. It’s the fact that Netflix tends to block VPN, but iTop VPN can get around the Netflix detection and allows you to watch Netflix as usual. How to change region on Netflix with free iTop VPN? Follow the steps below to enjoy streaming service without blockage.

Download iTop free VPN for macOS, Windows, Android, and iOS and launch on your device. There we take a Windows VPN version as an example.

Click the All Servers option, choose a VPN server, and click the connect button to change your Netflix region or country. The US is recommended as Netflix has the largest catalog in the country. For the free iTop VPN version, there are over 5 US servers distributed in different cities like New York and Santa Clara. For a VIP version, dedicated Netflix servers are provided to help you watch Netflix with high-resolution and fast speed. 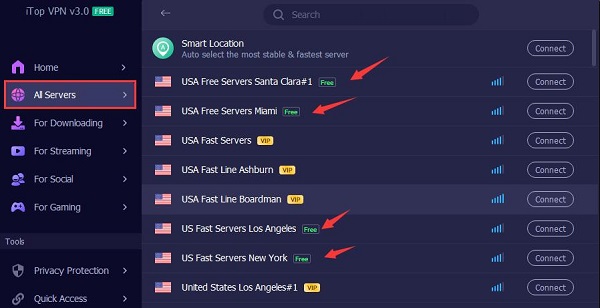 After connecting to the VPN, the main interface displays your current IP address. Another 3 protocols are available except the auto mode: UDP, TCP, and HTTPS. Choose one meeting your demand. Then log into Netflix and unblock content like the recently released You series season 3. 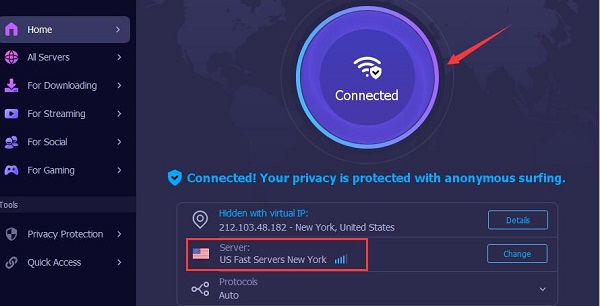 Netflix is really a popular streaming service containing a wide range of award-winning TV shows and videos. What if you are traveling to a foreign country and want to watch Netflix unavailable? How to change Netflix Region? Use the free iTop VPN and change your Netflix region and get access to various kinds of content without limitation.