The concept of VPN is known by a lot of people. A VPN (Virtual Private Network) will encrypt your internet traffic and reroute it to a private proxy tunnel instead of a public network. This is particularly useful since your data has been encrypted and transferred in a secret tunnel. That’s how does a VPN work, in general. 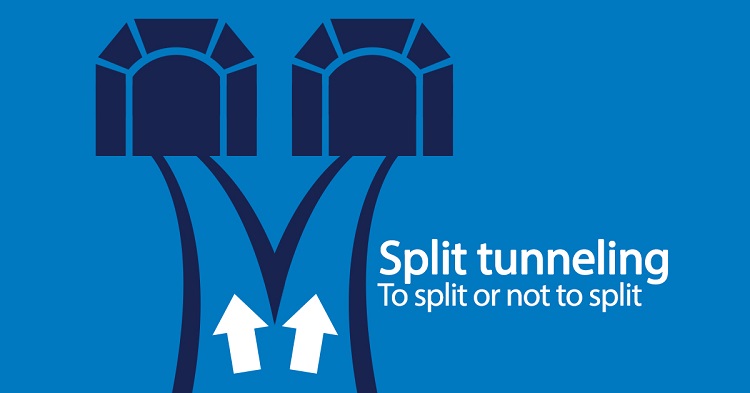 But what is a VPN with split tunneling? A VPN split tunneling allows you to route part of your internet traffic (application, device, webpage) through an encrypted VPN tunnel. While other applications, devices, internet browsers can connect to the internet without your traffic been encrypted and rerouted to the VPN private tunnel. That is how a split-tunneling VPN is functioning.

There is confusion here: if we use VPN to encrypt & protect our data through the transmitting process, why do we still give up the protection and connect to unsecured internet directly. Let us do a little more analysis about VPN split tunneling and why should we use split tunneling on Windows.

What is split tunneling VPN? A VPN service with split tunneling should be able to distinguish the sensitive data & application. Like when you are sending an e-mail, synchronize your working project with companies’ server, or you are trying to log in to a website that relates to your billing information, a split-tunneling VPN for windows could be perfect assistance. A matured VPN split tunneling software would be able to adapt a privacy-oriented strategy and protect your crucial data not to be traced. 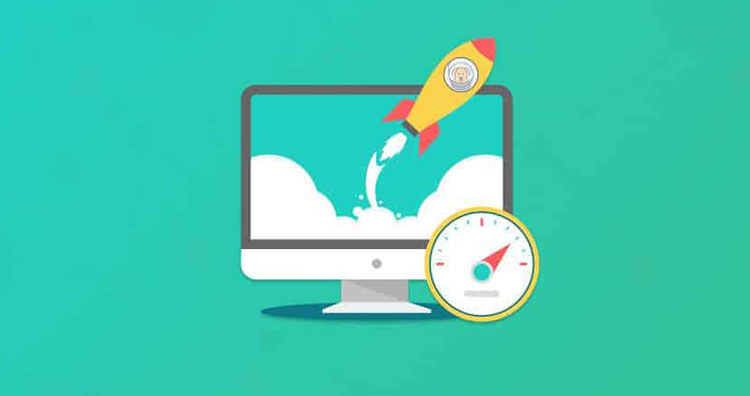 While a split-tunneling VPN for Windows is activated, all sensitive traffic will be encrypted & rerouted to a safe server, meanwhile, traffic with a low-security level, like online entertainment, video streaming, games, will be considered unnecessary to be encrypted in order to preserve your network capacity & bandwidth.

Due to the process of how a VPN works, all outward data packs will be encrypted by a certain algorithm & proxy (for example, OpenVPN). Like the iTop VPN encrypt your data with a military-grade protect algorithm, SHA-256. A thing that should notice is that the better protection is adapted, the longer the encryption/decryption process is needed. That’s why we consider using VPN will cause lags. 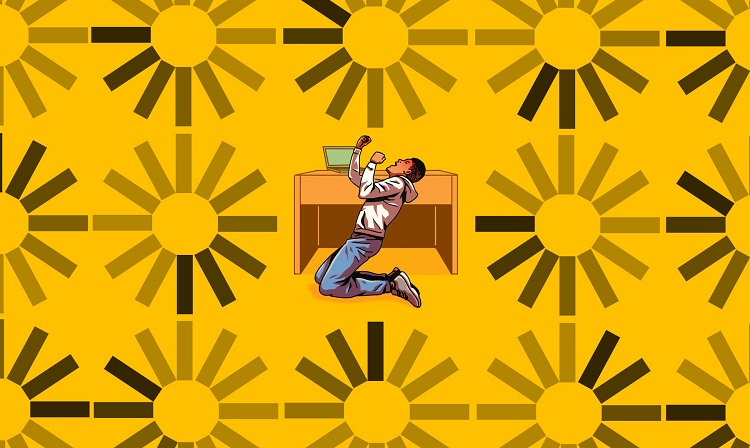 That is what we say is the most practical thing split tunneling can bring to you. You would not like to switch on/off your VPN to protect your online security while you are playing online games. Online first-person shooting like COD: Warzone & PUBG, any instant network lagging will kill you in the game. Because of the nature of VPN, surely you don’t want the VPN to encrypt your network traffic and lag your gaming. If you are using a VPN with split tunneling, there will be no trouble concerning lag issues when even using a free & unlimited VPN to protect your online privacy.

After concluding the benefits and shortcoming of using a split-tunneling VPN, some risks need to be weighed against the benefits. And the issues are mainly focused on the user environment, for example, the data security of a corporation. 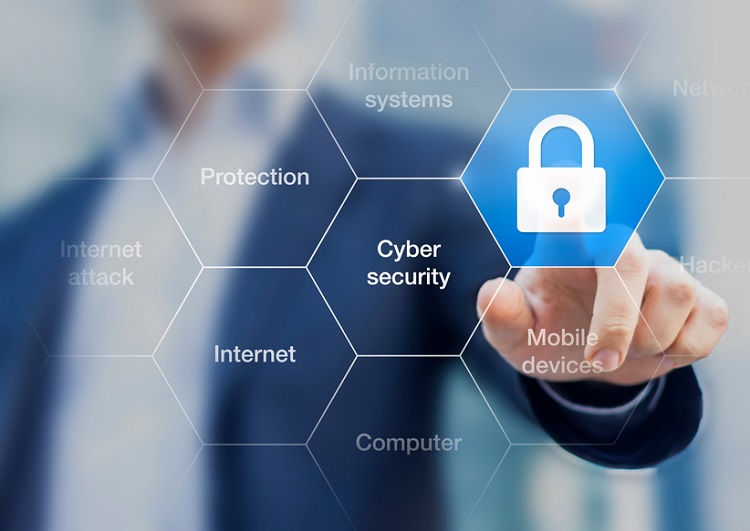 Organizations in charge of information security in a corporate environment are always using defensive technology like the VPN to protect their telecommunication endpoints and stop users from carrying out certain information, whether intentionally or by accident.

If you are a personal user, you can still threaten by the circumvent online security protection caused by the split tunnel feature. Someone who uses the in-game chat may tempt you to click a link like steam, which is excluded by the split tunnel, and then you will be exposed to an unsecured website and malicious software could plant in your computer.

By other means, if you are not fully protected, it also means you are unprotected. Once there is a crack of defense, hackers and privacy stealers would find their way to take what they want from you. That is to say, if you are seriously worried about your internet security, you’d better not use the split tunnel function.

As known as the most famous split-tunnel-supported VPN on the ground, ExpressVPN offers a very decent VPN protection service with optimized split-tunnel technology. It can effectively analyze your traffic and reroute it through different methods: VPN proxy tunnel or direct connection. 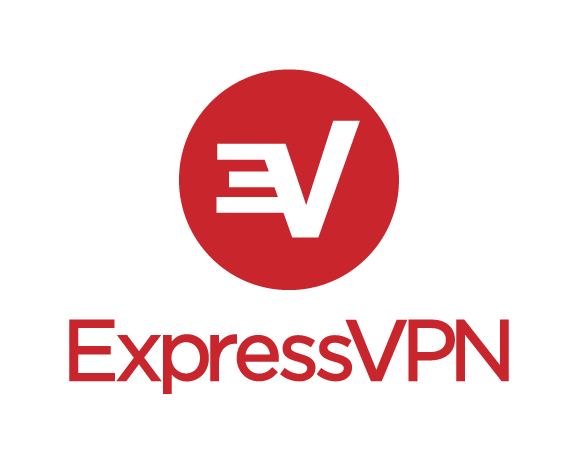 ExpressVPN is also considered a VPN with superior service quality: their live chat service is 24/7 online, and if you have any questions about the split tunneling about ExpressVPN, you can get a proper answer from their team. 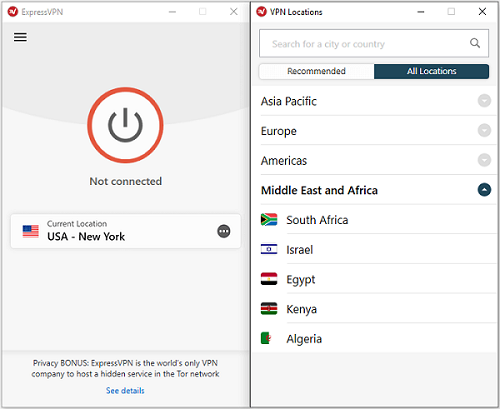 The problem with ExpressVPN is its pricing strategy. Though it offers decent security protection (had to mention that split tunneling could be the weakness of their security tactics) and excellent service, the price of ExpressVPN is just too expensive. You might like a free VPN in this case.

You can not have a free trial with ExpressVPN (only refund guarantee) & you need to spend almost 2 to 3 times of expense than other VPNs to get their service. If you are seeking a capable VPN with a certain degree of cost-effectiveness, think twice before purchase.

iTop VPN: One of the Best Protection & Flexibility

If you are seeking a VPN that can give you full internet security protection, then the iTop VPN is worth a try. As we’ve mentioned, non-split tunneling could have it’s advantageous at protecting your data security because it will encrypt all your traffic and send them to a secure Windows VPN server instead of your ISP’s server. iTop VPN with split Tunnel could help you get away from monitoring & controlling by the third-party easily. 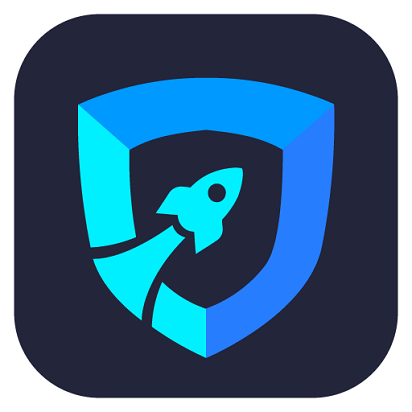 The only fly in the ointment is, because of iTop VPN will encrypt all your traffic, you might feel lag during the usage. And part of their features will need you to upgrade to a premium account to unlock. (or say a majority of them) 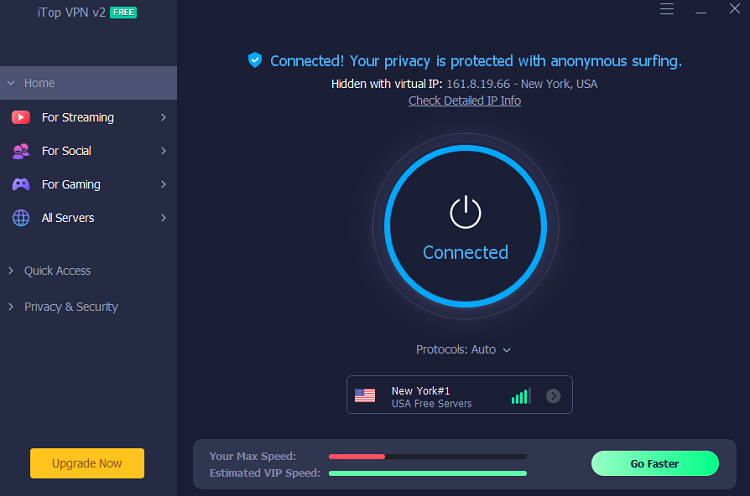 Another scoring point for iTop VPN is that it is a best free VPN for Windows. You don’t have to affiliate your banking info & your credit card to try iTop VPN free version. This free-to-use policy dramatically reduces your trial-and-error cost, you may decide if you keep using their service after the trial. And the iTop VPN price is quite reasonable when compared to ExpressVPN.

Everything you need to know about split tunneling VPN is presented as above. To understand what is VPN split tunneling, we need to understand that there isn’t a perfect solution to balance the speed performance & security protection. Improvement of network speed under VPN is always with your security protection compromised. Once we got that point, we could choose the better VPN service that fits our needs.