Read this page for an unbiased ZenMate VPN review and its best alternative, checking if VPN ZenMate is qualified in unblocking websites, high speed, and cheap prices.

VPN has been widely reputed for granting access to blocked websites and privacy protection in the cases that government blocks access either from abroad population or from unauthorized people, ISP tracks websites you visit under a public WiFi, and universities restrict your network when you try to stream videos and play games. However, it's not easy to find a safe and effective VPN software that best suits your budget, for which tools like VPN ZenMate receive a lot of reviews. 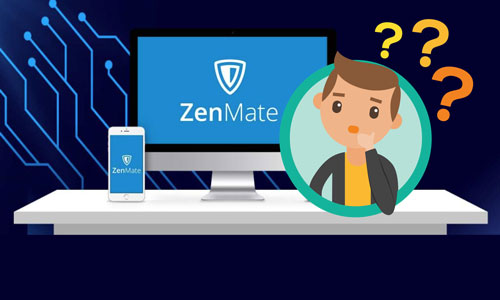 Does VPN ZenMate really deserve these recommendations when it comes to pricing, speed, security, and server coverage? This page gives a full-scale and unbiased ZenMate VPN review so that you can make your decision when choosing the best VPN for Windows PC, Mac, mobile phones, and other devices.

VPN ZenMate receives both positive and negative reviews from experts. Then what is the real ZenMate VPN review indeed? This part walks you through all aspects of VPN ZenMate as an IP changer, including its security, pricing, functionality, performance, compatibility, customer support, and other aspects.

Is ZenMate VPN safe? Generally, VPN ZenMate is safe enough for daily use due to its  AES-256-CBC cipher feature, tunneling protocols, kill switch, and its promised no-log privacy. However, VPN ZenMate has limited tunneling protocol options and it's based in Germany, which is a member of the 14 Eyes surveillance alliance and the European Union, meaning your privacy and anonymity may not be guaranteed when the no-log policy conflicts with the interest of the EU/Germany.

Pricing: The prices of VPN ZenMate are varied with different plans, including a monthly subscription at the cost of $10.99 and $1.64 per month over three years for the professional version. In addition, a 7-day ZenMate VPN free trial is available for desktop and mobile apps.

Performance: VPN services usually will lower network speed for technical reasons, but VPN ZenMate doesn't lower the downloading speed too much under a 300 Mbps baseline connection. However, its upload speed obviously drops 80% on average.

To be strict, ZenMate doesn't deliver features on its promises for security and privacy protection. Moreover, the ZenMate VPN review report indicates that it's not a good choice if you want a VPN for gaming and unblocking streaming platforms like US Netflix, BBC iPlayer, and DAZN. But it's a simple and user-friendly VPN to hide your IP address.

A lot of users are attracted by VPN ZenMate due to its 7-day free trial version. However, it has several limitations, such as sporadic server locations, limited device permission, and lagged network speed, not to mention more serious security issues in ZenMate VPN free trial compared to other VPN free like iTop VPN.

As you can see, VPN ZenMate is a hit-and-miss VPN tool and its security and privacy protection is not qualified on the basis of Five-Eyes country. For some advanced services like unblocking websites and protecting online security, iTop VPN is recommended as the best alternative to VPN ZenMate.

iTop VPN offers more competitive prices than the market norm for both short- and long-term subscriptions along with a 100% free version available. Users can choose a monthly plan, half-year plan, or yearly plan that values your money, either of which allows VPN access from 1800+ servers in over 100 countries. And all plans are guaranteed with a 15-day money-back policy.

As the best alternative to VPN ZenMate, iTop VPN offers a fast speed of over 100Mbps and unlimited bandwidth when you are unblocking a variety of websites, including social media platforms like TikTok, WhatsApp, Skype, and Instagram, as well as streaming and gaming websites like Netflix, BBC iPlayer, Disney+, PUBG, LOL: Wild Rift, and Free Fire. 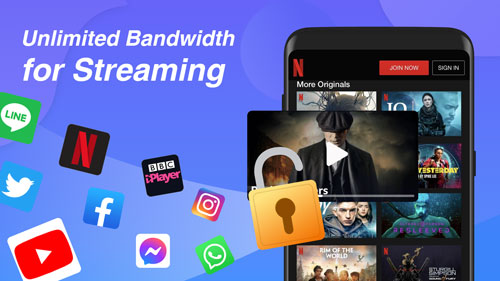 iTop is a user-friendly and simple VPN service. Its interface leaps to your eyes once you launch this VPN software, in which VPN servers are intuitively classified in terms of your need for streaming, socializing, gaming, or simply all servers available.

How to Connect iTop VPN?

Since iTop VPN is a better solution for a fast and safe VPN experience, how to set up it on your devices? The following is a step-to-step guide that helps you easily connect to iTop VPN in a few clicks.

Step 1: Download iTop VPN from its official website, install and launch this best free VPN for Windows, Mac, iOS, and Android. You can also get it in Google Web Store for your Chrome browser. 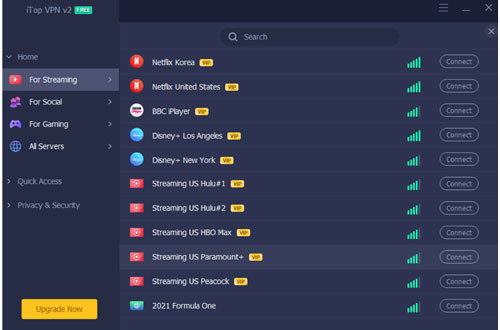 Step 3: Click on the "Connect" button, grab a cup of coffee and sit down to enjoy risk-free and smooth surfing. 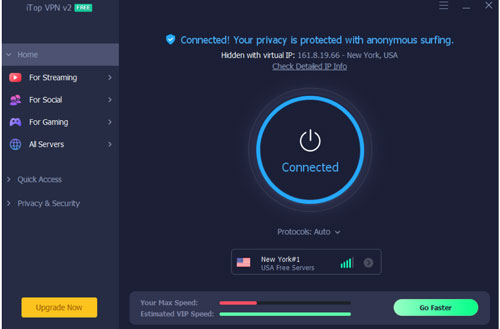 Instead of spending time reading tedious ZenMate VPN reviews, using iTop VPN is very straightforward and you can get the hang of its comprehensive features in a really short time.

VPN ZenMate actually is an affordable VPN with recognized features like kill switch, torrenting and P2P connections, and quick customer support, but it saves your money at the cost of limitations. When it comes to privacy and advanced security options, website unblocking, and streaming speed, VPN ZenMate is less competitive than its alternatives like iTop VPN.

Get started with iTop VPN now.