End to End Encryption VS. VPN: Differences and Which is More Secure

End to end encryption VS. VPN - both of them are great ways to secure online messages, but a VPN is a better choice because you enjoy more benefits.

Messaging apps make it easy to communicate with your families, friends, colleagues, classmates, and even strangers around the world. To better protect users' security and privacy, those messager services such as WhatsApp, Signal, and Zoom implement end to end encryption to private messages.

Using a VPN is another great way to encrypt the messaging traffic and prevent your private conversations from being breached.

What is End to End Encryption?

End-to-end encryption (E2EE) in WhatsApp and other communication apps is the act of encrypting the messages all the way from the sender to the recipient, preventing data from being read, listened to, modified, or misused in transit.

Depending on what kind of messages your communication platform supports, all texts, videos, pictures, audio, calls, and anything else will be directly and immediately encrypted by the sender and decrypted by the recipient. 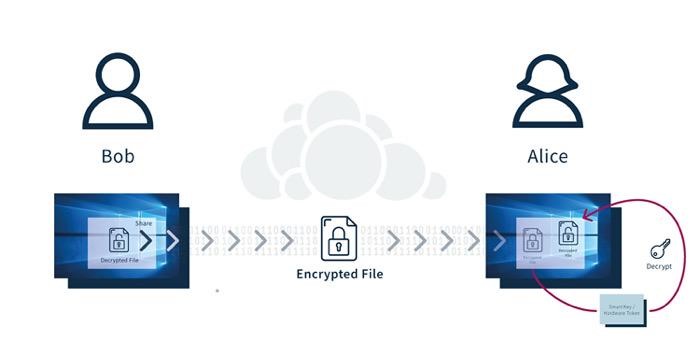 Only the communicating ends can encrypt and decrypt the messages, so any third-party service doesn't have the means to decrypt, store, or intercept them. In another word, except for the people engaged in a conversation, cybercriminals, internet service providers, app developers, governments, or organizations that may collect information cannot access the chattings at all.

So far, it is the safest and most private way of messaging.

What is a VPN?

A Virtual Private Network (VPN) allows you to create a protected private network from a shared or public internet connection through remote servers a VPN provider hosts.

A VPN gives you online anonymity by redirecting your real IP address through a specially configured shared IP address. VPNs usually use dynamic IP addresses to make it impossible for your ISP to track your actual whereabouts and the devices.

It also secures your online privacy by encrypting all your online traffic and routing the network traffic through servers overseas. The local government, internet providers, and advertisers will never know your browsing history and other web activities such as messaging, torrenting, VPN for Gaming, or banking.

End to End Encryption VS. VPN: Which is Better?

Both end-to-end encryption and VPN can encrypt your online messages. Read the next section to know their differences and which one is more secure.

End to end encryption VS. VPN:

In summary, both E2EE and VPNs are modern and safe ways to protect your private chattings from being leaked or misused, but VPNs can encrypt more web traffic and give you more benefits. 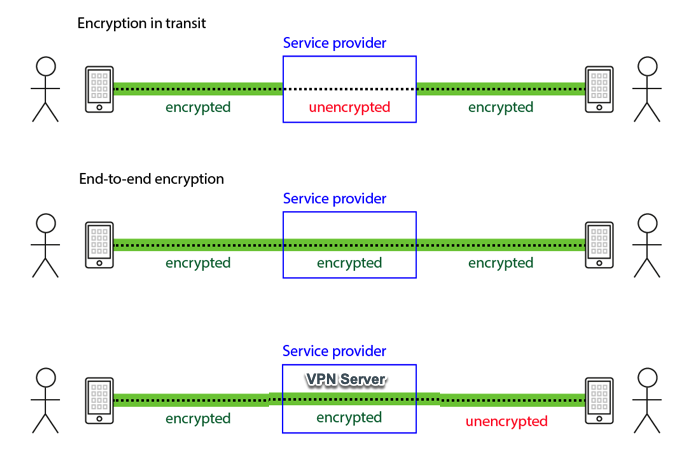 If you prefer to have a combination, an end to end encryption VPN is what you need. iTOP VPN is recommended for you - a VPN with end-to-end encryption and more security technologies.

iTOP VPN provides security and protection to your online communications with end to end encryption in three ways:

In addition, iTOP VPN uses more sophisticated security and privacy features to establish barriers between your ISP from tracking, logging or selling your online behavior.

FAQ to E2EE and VPN

End-to-end encryption is safe for messaging. This technology ensures that only persons you exchange messages with can access to content you send. No third party, including the service providers, can read or listen to the content you send.

2. Does a VPN encrypt all traffic?

Yes, a VPN encrypt all network traffic between your devices, such as mobile phones, computers, game consoles, smart TVs, and tablets, and the VPN server your device is connected to.

Technically speaking, a VPN is not end-to-end. VPNs tunnel your traffic through VPN servers and only ensure your traffic is encrypted between the device and the server, not as it travels the rest of the way to the device, or once it leaves the VPN server for its destination.

When you chat, the messages you send and receive travel a long way across the network. Without protection, bad things could happen at any point. You can choose to use end to end encryption in WhatsApp and other communication apps or a VPN to protect your data.

An iTop free VPN can secure not only your private massages but other online experience. It also can unblock geo-restricted entertainment content, games, live streams, and social media for you. Avoiding bandwidth throttling, thus a faster internet speed, is another benefit.

Download iTOP VPN, the best free VPN for Windows,  to have a secure chatting experience and enjoy more.