Windscribe VPN is a popular and one of the top-rated VPN providers across the continents. The Canada-based VPN servers were founded in 2015 to provide VPN services and block ads, explicit content, and phishing websites. It has succeeded in its primary role, but the competition in the VPN industry demands improvement. If you want to try the Windscribe VPN, you first must ask yourself questions like “is Windscribe safe?” or “is Windscribe a good VPN”? If you answer these questions, you will probably make the right decision.

Even before you dig into the core of the VPN Windscribe review, we have given you the verdict table below.

Now that we have a glimpse of the verdict of the Windscribe VPN reviews, we need to dig into its features to get a crystal clear picture. Some of the features of Windscribe VPN include:

The several security features of Windscribe VPN make it safe to say it is a safe VPN.  While other VPNs have no logs policy, Windscribe has a “no identifying logs policy.”  Windscribe's privacy policy is clear and states that it does not store connection logs, IP timestamps, or the sites you visit. This means the data they collect and store cannot help authorities to identify you.  Its logs policy can raise eyebrows but not that much because the collected information is trivial for authorities.

Windscribe VPN Chrome extension is available for Chrome users in the form of a browser extension. This extension offers good security and privacy features. It comes with a secure link generator, ad crusher, malware evader, webRTC slayer, and whitelist feature to disable VPN on selected websites. This way, you can block ads, malicious domains, and data leaks. It is great when the Windscribe VPN Chrome extension works in tandem with the app itself.

Windscribe provides a basic streaming experience. Perhaps this could be different with a static IP address.  Many people find it hard to pair Netflix and Windscribe VPN. However, dedicated servers like WindFlix Canada, WindFlix US, WindFlix Japan, and WindFlix UK will help you pair them with ease.  When using these dedicated servers, the speeds should be good enough to stream Netflix content in HD. You can also stream from platforms like YouTube, Amazon Prime Video, Disney+, and BBC iPlayer. However, you will need static IP to bypass blocking and detection.

Windscribe VPN supports file torrenting over peer-to-peer sharing applications. It is good, especially for large files, because the ISP can slow your speed when detecting that you are torrenting large files. Windscribe does not support file torrenting in some servers, especially in South Africa, India, and Russia. It is recommended that you avoid VPN servers offered to free users because of the huge traffic associated with these servers and thus making them unsuitable for handling large file torrenting. Windscribe VPN also provides the split tunneling feature that allows users to split their traffic and send some via VPN tunnel or outside the tunnel. In general, Windscribe VPN is not badly off in torrenting. For a VPN with no WireGuard, we can excuse it for the few deficiencies. However, there are other better VPN for P2P free.

The following table gives you a summary of Windscribe VPN apps and devices review.

iTop VPN easily slots in as the best free VPN for Windows for windscribe alternatives for several reasons. This amazing VPN offers incredible features that transform the way you access to content over the internet. iTop VPN hides your IP address and protects your data so that intruders and hackers cannot monitor or track your activities. The combination of no-log policy and advanced security features ensures military-grade protection yearned by every user.

Furthermore, it has the kill switch feature that ensures your sensitive data and information remains safe even if the VPN shuts down. With iTop VPN, you can access a plethora of servers across the globe. To be precise, it allows access to over 1800 servers across more than 100 regions! It never stops here either.

It allows users to unblock many gaming and streaming sites, including the popular and hot ones like Netflix, Disney+, LOL, Wild Rift, BBC iPlayer, WhatsApp, TikTok, and Skype, among others. So if you are worried about geo-restrictions, then iTop VPN is an instant solution.

How to use iTop VPN 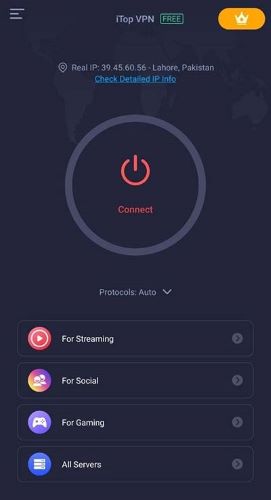 Open iTop VPN to access its primary interface. Here, you should see several server categories. Choose the desired server category. You can find specific servers by enlarging the category options. 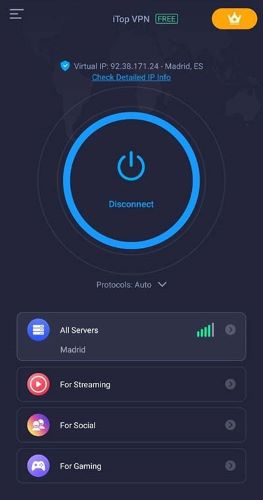 When you are satisfied with the server selected, click the “Connect” button on the screen and wait as it loads. When it is successful, the button should turn from red to blue. You can now proceed to find the target content.

NordVPN is one of the highly-rated browser-based VPN services used by plenty of people. It is a VPN for Windows, Mac, Android, and iOS. It supports several servers in different countries across the world, with 15 alone in the US. Its security features are great. Thanks to useful security features like IP protection, DNS leak protection, kill switch, and financial data protection. However, torrenting is only supported on some servers, while speeds in other countries are abysmal.

ExpressVPN is another great Windscribe chrome VPN alternative that you can try. It offers good website unlocking capabilities, including geo-restrictions. This VPN has access to over 140 servers across over 90 different countries. Again, Express VPN supports unlimited torrenting/P2P facility and HD/4K streaming. While there are several good features, it is not without flaws. It is more expensive than other VPNs and does not provide the kill switch feature on iOS devices. If you are using Linux, you will probably release that there is no graphical interface.

With the wealth of information given in this article, you can easily see that iTop VPN is the best VPN Windscribe alternative. The collection of top-grade features makes it the most reliable and effective VPN free tool.

iTop VPN has all the features you would demand from a top VPN service. As if this is not enough, iTop VPN is 100% free. It sounds unreal, considering the value you get out of this product. If you need the best VPN Windscribe alternative, download iTop VPN and get the best VPN experience.