Israel is a developed country with high standards of living and cutting-edge technologies in software, science and other aspects. Even though cyber safety has gotten much attention from its citizens, especially some cases have been reported that someone or some groups have been spied on or monitored by the government or other parties. Don’t worry. A virtual private network, that is VPN, could help you by hiding IP address and staying anonymous online. 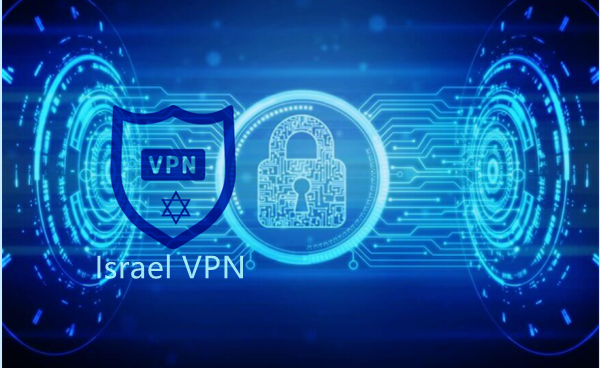 For people living in or traveling to Israel, you can use VPN for Israel to hide IP addresses to get private access to the internet. Additionally, you can change IP to other countries to unblock geo-restrictions. For users who live in other countries and want to get first-hand information in Israel, you can use Israel VPN to change IP address to Israel. As one of the best free VPN for Israel in the industry, iTop VPN, an editor's top choice, is recommended in the articel. Keep reading to know detailed info.

iTop VPN has 1800+ servers in more than 100 locations spreading across the world, Israel servers included. It means that you can get access to your favorite sites and apps without geographical worries.

How to get Israel IP address? Detailed steps are shown below. (Israel server is a high-quality server and used after subscription, which can be done by clicking the buy button below.)

1. Download and install the VPN for Windows, Mac, Android, and iOS on your device. (Ignore the step if you’ve installed iTop VPN.)

2. Open the VPN for Israel, find the Israel server in the “All Servers” list, and click the connect button on the right. (To find your wanted server fast, type the country in the search box on the top.) 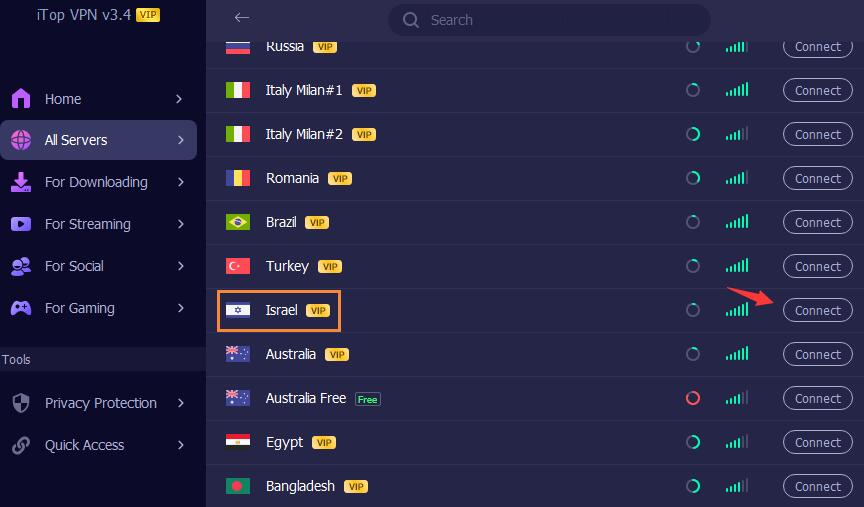 3. When the button turns blue with words in the middle reading “Connected”, it means you have connected to Israel IP successfully. IP address and chosen protocol can be seen on the screen. 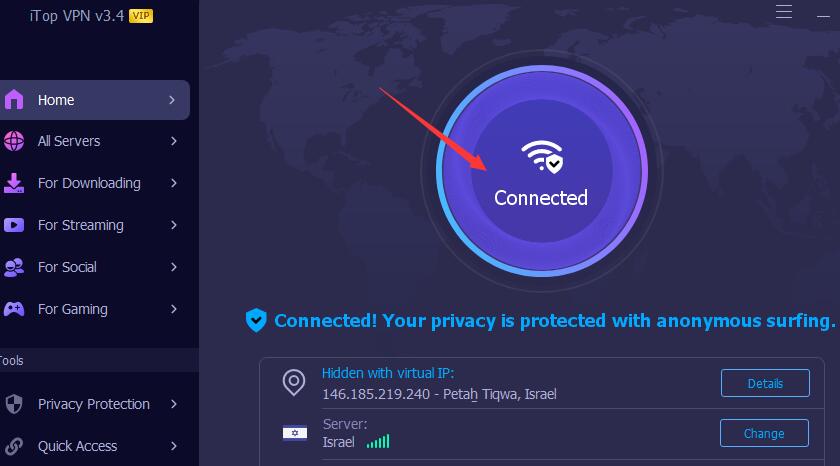 The Israel VPN iTop VPN has 1800+ servers in 100+ locations distributed in Asia, Europe, North America, Africa, etc. You can change IP to the country/region you want at your will such as India, US, United Kingdom. To travel abroad, iTop VPN is definitely useful as it has servers in world-famous tourist destinations such as Tokyo, Los Angles, London, Frankfurt, Milan and more. Dedicated servers can be accessible for top streaming sites like Hulu, HBO Mac, Paramounts+, for gaming like COD Warzone, PUBG, Minecraft, for a social platforms like TikTok, Omegle, Telegram. If you want to share or download files using P2P network, there are dedicated P2P servers to use. 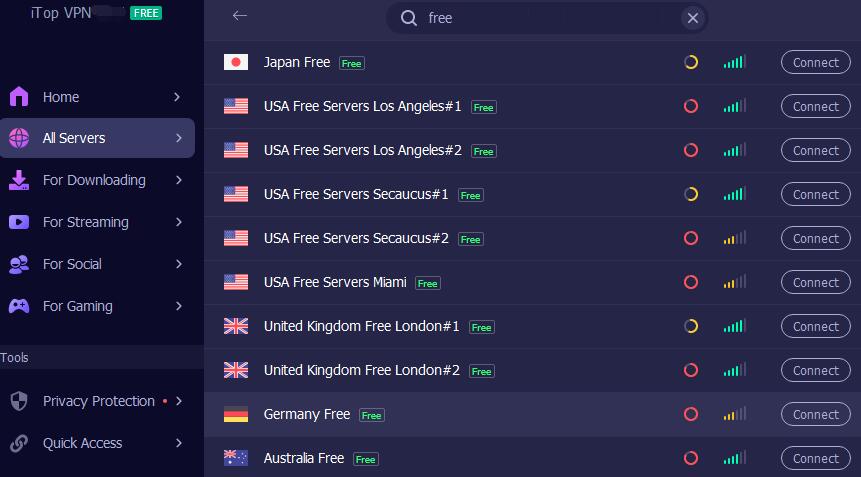 How to ensure you stay anonymous online to protect your data? The safe VPN iTop VPN has provided some vital features that will be clearly explained below.

Hide IP address: Since you choose VPN servers from the servers list, your IP address is hidden from ISP, advertisers, and trackers.

DNS protection: Use advanced technology to prevent your system's DNS settings from being modified and indirecting to another malicious site.

Ad-block: The ad blocking VPN blocks ads in most cases to help you view pages or watch videos without interruption.

More Privileges of the VPN for Israel to Enjoy

Dynamic IP and static IP. Some people need dynamic IP addresses that are constantly changed for a higher level of security. Static IP addresses are not changed and are favorable to those who always log into social platforms and emails to avoid repeated verification.

Split Tunneling. It cannot be denied that sometimes internet speed will slow down for some reason after connecting a VPN. For apps or sites without website unblocking needs, you could manage to let them go through the local internet and others are encrypted by VPN tunnel.

OpenVPN protocol. OpenVPN is a widely used types of open-source encryption technology to facilitate a secure tunnel between two points in a network. iTop VPN allows you to choose OpenVPN (UDP, TCP) as well as HTTPS for specific needs.

As is known, you enjoy fewer privileges when using a free VPN version. The minority of these servers offered by iTop VPN is free servers involving USA, UK, Germany, Australia, and others. It means that you can get free access to these servers in Israel. But to change IP address to Israel, you need to use the premium version, which enables you to connect to 5 devices simultaneously. Here are features you can enjoy using a free version and premium version. Insist to use the free version or upgrade to the premium version? It’s up to you.

More features of the premium version:

iTop VPN, a VPN in/to Israel, can help you change IP and get access to any site you want. It also has many features to safeguard your online privacy. Download the best free VPN for Windows 10, Mac, Android and iOS devices now to connect to global servers.