How to Watch Netflix Korean Dramas/Movies with Free VPN

The Korean entertainment industry has passed all limits of success and has gained popularity all around the world. Netflix Korean has a great role to play in the success of Korean films and series. With the huge success of Squid Game, surpassing all the records, people have started believing in the talent coming out of Korea. Korean movies and drama series have become very popular for movie lovers out there in the world.

The Netflix library is filled with Korean movies and dramas. To have access to these outstanding entertainment pieces, you need to access Netflix Korean. This becomes impossible when you live out of Korea even if you have Korean nationality unless you use a VPN service. Using a watch Korean Netflix VPN, you will be able to access Korean Netflix from anywhere in the world. 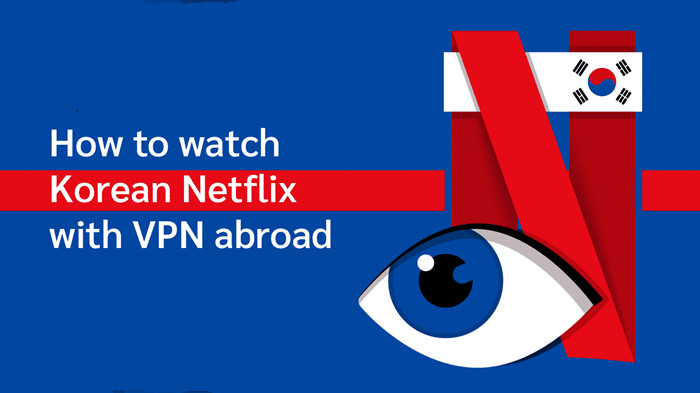 The following context is all about introducing you to a free VPN that can help you gain access to Korean movies and seasons without having to go through any difficulty.

While talking about the Netflix Korean movies and dramas, it is imperative to list those that are available on the platform right now. Here are 10 of the best movies, seasons, and dramas that you can stream live on Netflix Korean.

So, as you can see, the list contains all-time favorites and the most popular series, dramas, and movies coming out of Korea. Whether it's romance, thrill, mystery, or adventure, Netflix Korean has a lot to offer. If you are a true movie lover, you don’t want to miss out on these. But to gain access to these, you will need a strong VPN service if you live out of Korea.

This is what this article is all about. We will make everything clear in the following on how you can get access to these Korean movies and dramas using the fastest VPN without having to pay for subscription plans.

To watch Netflix Korean drama in the Netflix library, you will need a VPN service that enables you to get access to Korean Netflix and watch dramas smoothly. For this purpose, a simple VPN is not enough and you will need the best in the business. Thankfully for you, we have just the thing in mind.

iTop VPN is the top credible choice when it comes to streaming Netflix Korean movies and seasons without spending any money. Moreover, the speed and safety of a VPN service is also a factor that needs to be taken into account. iTop VPN doesn’t fall short on this front too. It provides all the best features of an ideal VPN for Windows, Mac, Android, and iOS and it does all that without charging a fee. You can use it for as long as you want for free. Once you start watching Netflix Korean with it, it will exceed your expectations. Upgrading to VIP with the best deal allows you to enjoy streaming faster.

The following features of iTop VPN make it the best free VPN to access Netflix Korean.

The moment you start using iTop VPN, your device will be free of any logs. The VPN doesn’t keep any logs during your visits. Unlike most other VPN services, you can use this VPN without logging in or providing any sensitive information. It obeys strict no-log policy and doesn’t track how much of it you used during every session. You don’t have to be worried about being tracked all the time as iTop VPN assures that you are left alone when you are using this VPN service.

You will not be charged for using the best free VPN for Windows and Mac for Netflix Korean. Unlike other alternatives, it doesn’t limit your bandwidth and you can use it as long as you want. You may come across a few ads but that is it. Other than that, you have nothing to worry about. All the servers are up for grabs. You can even use the premium servers by watching a short ad.

On the launch interface of iTop VPN, you can see different options. It lists all the servers making it easy for you to choose from. You can also choose the dedicated servers for Netflix Korean live streaming and for other streaming platforms like BBC iPlayer. The dedicated servers are fast and load less than others. This means that you will be able to enjoy uninterrupted Netflix streaming as long as you want.

iTop VPN is a global VPN that has its servers spread all around the world. The large network of 1800+ servers is expanded in over 100 countries. You can simultaneously connect up to 5 devices with iTop VPN and enjoy the best services. It has been loved by everyone who has used it to access Netflix Korean because of its good streaming speeds.

With a built-in ads block feature, you can block recurring ads on any website for VIP. You won’t be charged additionally for using this feature. It's just one perk of using iTop VPN as your go-to VPN for Netflix Korean streaming.

So, you can avail all these features for as long as you want. You can later upgrade to the premium plan after satisfying yourself. The premium plan rates are also lower than any other VPN in the market. 2-year plan only costs $55.44 in total.

Also Read: Best VPN for Plex: Get Access to Plex No Restrictions >>

Streaming Netflix Korean and watching your favorite Korean movies, seasons, and dramas is an easy 3-step process. Follow the three steps given below to quickly live stream your favorite content from the Netflix library.

The first step is to download the iTop VPN on your device. You can download it from the Play Store, App Store, or iTop VPN official website www.itopvpn.com for your Mac and PCs.

Launch the app and on the main page, you can see a dedicated section of servers named “For streaming”. Choose any proceed and proceed to connect to a server for Netflix Korean streaming. Of course, you could choose to change IP address to Korea to achieve the same goal. 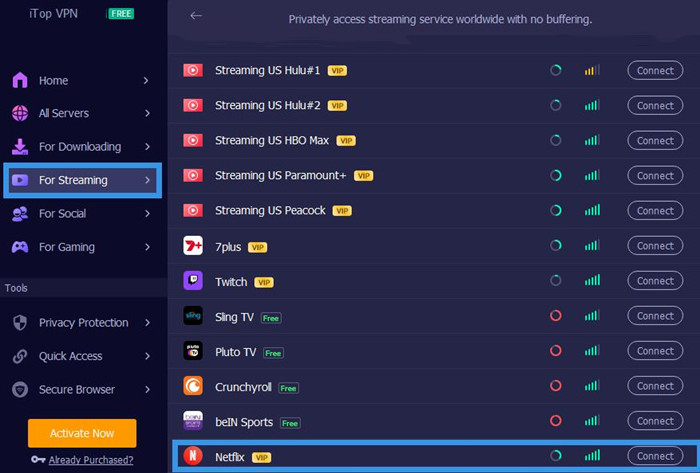 Step 3: Connect to the VPN

After selecting a server dedicated to streaming, you can go ahead and tap on that big “Connect” button in the middle. As soon as you click, you will be connected to a server. Enjoy unlimited Netflix Korean streaming. 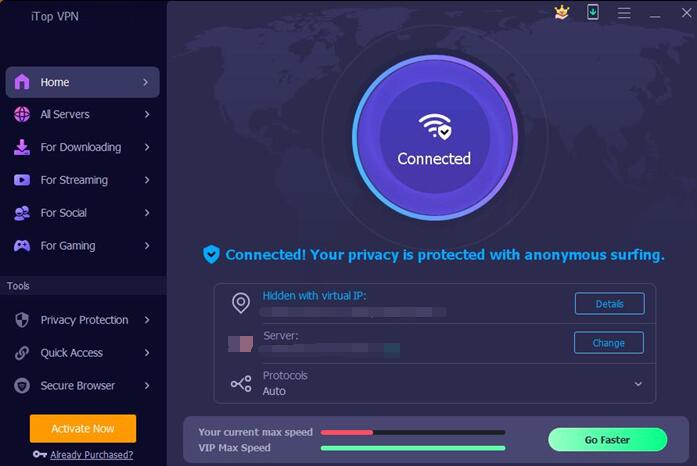 So, in a nutshell, a VPN is necessary for you to access Netflix Korea if you live out of Korea or travel to other countries. iTop VPN, as one of the free unlimited VPN for PC, is the most preferred choice because of its wide network of servers dedicated to streaming and secure protocols. The choice even becomes simpler when you have fast servers at your disposal for free. You are not charged nor are your records logged.

You can also enjoy safe gaming, surfing, and torrenting with iTop VPN. So, download and install this good free VPN now and enjoy unlimited Netflix streaming of your favorite shows.