Are you worried about missing your favorite FOX shows while traveling? Read here how you can use a Fox VPN to Watch Fox Unlimited Free, Fast and Secure on PC. 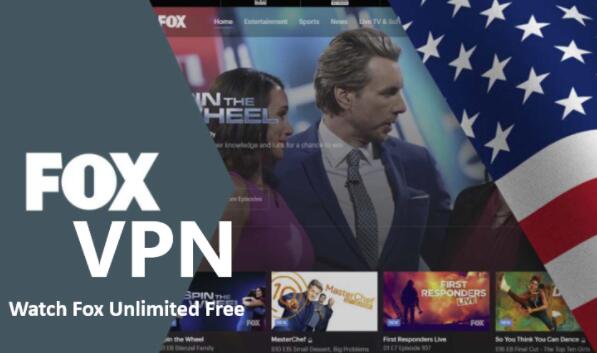 The Fox Corporation owns and operates the Fox Broadcasting Company. It is a free-to-air television network available to US citizens. The Simpsons, So You Think You Can Dance, Family Guy, Glee, Masterchef, Bones, Hell's Kitchen, and many other series have been produced by FOX TV during the previous decade. If you don't live in the United States or travel outside the US, you won't be able to watch these shows. FOX geo-block its material to prevent non-Americans from watching it.

Why Do You Need a VPN to Watch FOX? 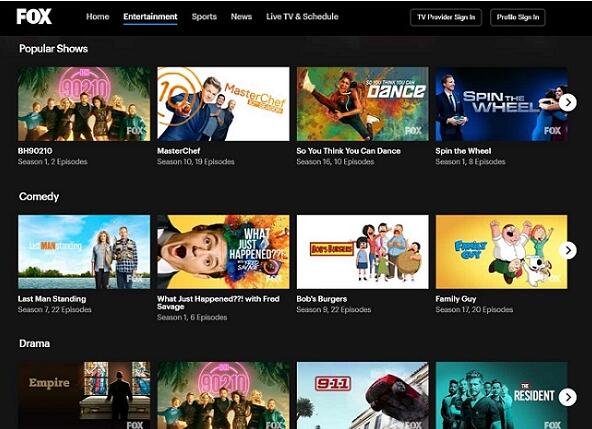 How can you overcome this issue? You can get around this issue by using a VPN for Fox. VPNs can unblock material and overcome geo-restrictions by impersonating your location via geo-spoofing.

Here is a list of popular shows available on FOX NOW:

VPN also works for other channels such as Netflix and Disney+ and more. Click HULU VPN to find out what popular shows you can watch there.

How to Use VPN to Watch FOX Online, Secure, and Anywhere?

If you are looking for a reliable VPN to watch FOX online from anywhere globally, then iTop VPN is the best option for you. iTop VPN is a fast and free VPN that allows you to protect your privacy while still allowing you to access limitless video games, music, social networking sites, and streaming content anywhere across the world.  This free VPN uses military-grade encryption and hides the user's true IP address from hackers and trackers.

Furthermore, iTop VPN's automated Kill Switch can function as a safety net if your VPN connection is lost. You'll never have to worry about your personal information or sensitive data being exposed.

iTop VPN allows you to bypass geo-restrictions and have unrestricted access to any material, no matter where you are. This FOX VPN unblocks social networking apps, such as TikTok, WhatsApp, Skype, and Instagram, bypassing government restrictions to access your favorite films, music, and websites. Surprisingly, dedicated servers of Netflix, HBO MAX, FOX, BBC iPlayer, Disney+, PUBG, LOL: Wild Rift, and Free Fire provide a quicker and better streaming and gaming experience. With its great features for every situation, iTop VPN can function on all Windows laptops and desktop computers.

Follow these steps to watch FOX online with iTOP VPN:

Visit iTop VPN for Windows. Install iTop VPN on your PC by clicking on Free Download, or you can directly download it here.

On your computer, open the VPN. On the upper left side, select the option For Streaming. 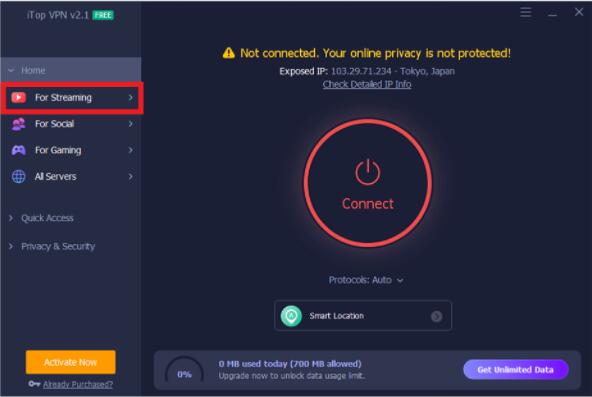 You'll notice a list of different names of streaming websites. Select FOX NOW from the drop-down menu and click Connect. 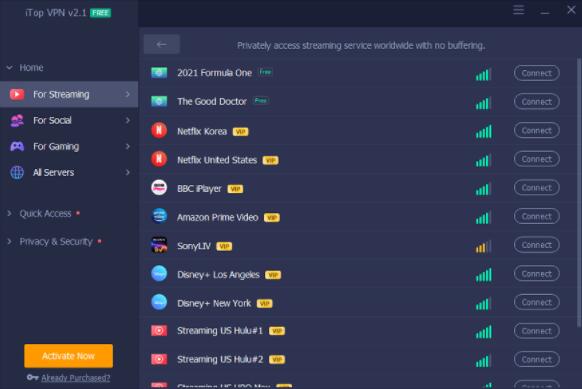 Wait a few seconds for the server to connect to you. You can now watch FOX channels outside of the United States from anywhere in the world. 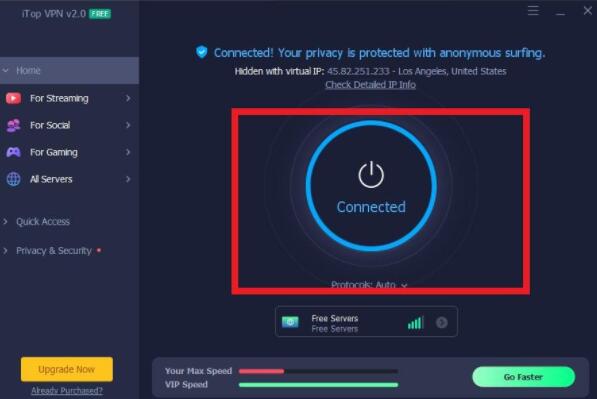 If you want to watch your favorite shows on the FOX channel easily, you can follow the four simple steps to use the iTop VPN mentioned above. With this Fox VPN for pc, you can watch and unblock any content from anywhere in the world.

What Makes iTop VPN a Good VPN for FOX?

iTop VPN is one of the best Fox VPNs because it is reliable, secure, and 100% free. It can connect up to 5 devices simultaneously and unblock streaming websites with just one click. You can watch your favorite shows without any lags due to its quick access feature. iTop VPN also protects your browser privacy and maintains the quality of the videos even if your internet service provider limits bandwidth on the streaming site

Here are a few fantastic features of iTOP FOX VPN:

What Else a Fox VPN Can Do?

You might be wondering what else you can do with a Fox VPN? You will not only get to unblock and watch popular shows on the FOX channel but with a FOX VPN like iTop; you can enjoy other fantastic features as well, which includes:

FOX has many popular shows, so chances are you're hooked on at least one of them. Why should you be unable to watch your favorite shows just because of your location? The answer is you shouldn't be, and luckily, a Fox VPN like iTop VPN will help you get around frustrating geo-blocking. We highly recommend iTop VPN because it is fast, safe, and provides a reliable VPN service that covers all of the most popular VPN needs, such as access to banned websites, streaming, and better ticket pricing based on location.