Elden Ring is region locked? With Elden Ring VPN, you can play the new game from anywhere with no lag. Get the best free VPN for Elden Ring now.

Elden Ring, the newly-released action role-playing game, is highly acclaimed by gamer since its launch day, February 25, 2022. It is recorded as the third largest Twitch debut of all, about 900,000 viewers within 24 hours and topped weekly sales chart on Steam.

What makes Elden Ring great? FromSoftware developed it as the Souls series successor to merge traditional combat with innovative open-world exploration. Instead of guidance that directs you where to go or what to do, you are free to discover new destinations. Plus impressive soundtrack and art direction, it drives you to experience the most extraordinary adventures of all time. 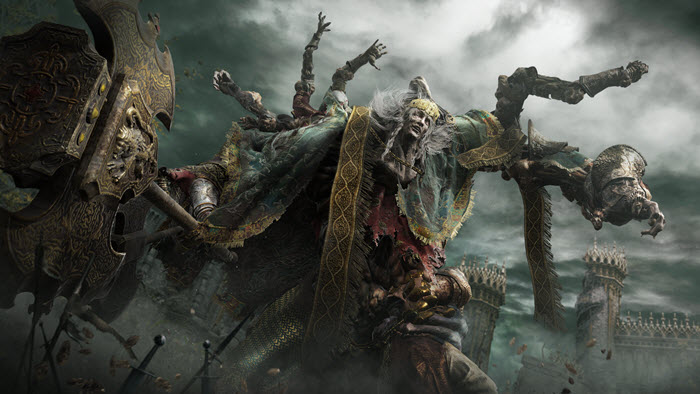 It’s the exiting time for player to adventure in the virtual brutal Elden Ring world. However, not everyone has the chance to enjoy the game unless using a VPN for Elden Ring. Yes, the game is region locked. It can be only activated in the country where you purchased it and not available in Japan and Venezuela.

So, if you bought the game outside of your region or live in an restricted country, you should take advantage of a VPN service to play the game without hassle. In this article, we would like to introduce the best free Elden Ring VPN and how to use it to unblock Elden Ring as well as speed up internet for gaming.

Contents
Why to Use a VPN for Elden Ring
What’s the Best Free Elden Ring VPN?
How to Unblock Elden Ring with VPN

Why to Use a VPN for Elden Ring

Using a free VPN for gaming is pretty common because it can bring various benefits to make better gameplay experience.

Elden Ring is proven a region locked product. As mentioned above, you probably fail to activate it if you bough it outside of your region. Some people try to refund and re-order the game from the current region. But a Elden Ring VPN can solve the problem quickly and easily. It can circumvent geo-blocking to change your location to the unlocked region. Therefore, Elden Ring can be accessible from anywhere. Also, if you are using a restricted network, for example, for school, work etc., VPN can also mask your information to avoid bans for gaming.

Don’t take security easy. Online hackers take action unexpectedly. VPN for gaming can strictly encrypt your data when playing Elden Ring. Your game ID, personal information and billing account and more will never be exposed or stolen in the game community. Also, you can avoid malicious attacks or track to enjoy Elden Ring with no worries.

A good free Elden Ring VPN can lower ping. ISPs and network administers control bandwidth to decrease network congestion and cause high ping times when gaming. VPN can stop ISP throttling and network blocking at school, workplace so that the ping time can be greatly reduced. And, good VPN servers can also improvement performance enabling you to play Elden Ring with no lag.

If you need the help from a VPN service but have no idea how to choose a good VPN for Elden Ring, iTop VPN can be the best choice. First of all, it is free to use. You can evaluate it without paying and even an account. More importantly, it can bring a series of benefits when gaming.

iTop VPN has an array of servers in 100+ countries empowering you to access global network. Once you connect to a server, your IP address will be replaced with a new one. No matter where you are actually are, the online location is changed and you can access any region locked games, like Elden Ring, with ease.

The best free Elden Ring VPN utilizes military-grade encryption on the tunnel for data transmission. All your data, from ID/sensitive info to online activities, is classified. No one can track and stalk you on the internet. Your security and privacy will be well protected. What’s more, iTop VPN is a no-log VPN that it will never record and keep your info.

High-quality servers employed by iTop VPN reduce VPN latency and speed up the network. The Smart Location feature can help you automatically connect the most stable and fastest server to play Elden Ring without lagging. Although sometimes you connect to a long-distance server, it can also deliver good performance. Also, bandwidth throttling can be perfectly prevented. You will not suffer sudden slow connection with this free VPN for Elden Ring.

How to Unblock Elden Ring with iTop VPN

iTop VPN is a reliable VPN for Windows, Mac, iOS and Android. It is fully compatible with Windows 10/11. You can unblock Elden Ring on Windows 10 at will. It is also an user-friendly VPN provider with no complicated setup. Only in 2 steps, you can play Elden Ring from anywhere with fast speed.

If you want to break region restriction for playing Elden Ring from anywhere, click All Servers, select a unrestricted location and click Connect.

If you just need to get faster speed for gaming, directly click Connect button in the center and the application will connect to a nearby server for better gaming experience.

Once it says “Connected”, enjoy the game. 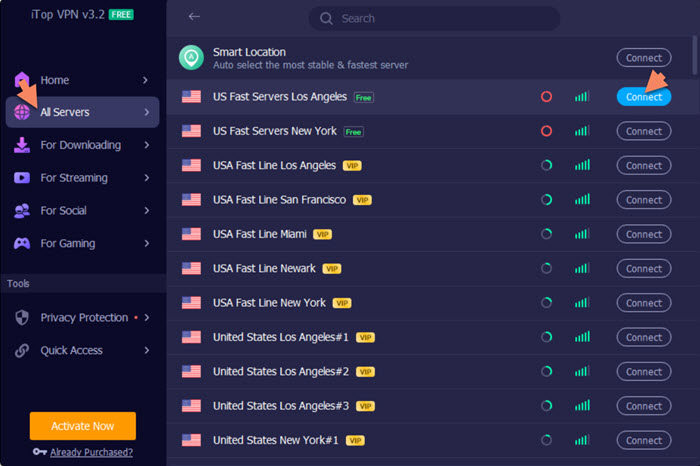 1. iTop VPN gives quick access option for gaming. You can directly connect to the professional game servers, for example Lost Ark, Elyon to unblock your favorite games with no restriction.

2. iTop VPN is not only the best free VPN for Elden Ring or other games, but a versatile VPN service for streaming (Netflix/Amazon Prime Video etc.), social (TikTok, Snapchat, WhatsApp etc.), and downloading (with the support of P2P).

Elden Ring is undoubtedly the hottest game in Spring 2022. Its open-world system brings brand-new experience to explore in the game. The brilliant combat and gameplay get players immersed. However, some of you are unavailable to access Elden Ring due to geo-blocking issue. A VPN for Elden Ring can be the fixer. iTop VPN shows its solid ability to unblock Elden Ring on Steam or other platforms and keep you safe when gaming. What’s more, it can reduce ping time and speed up the internet thanks to high-quality servers and the feature to bypass ISP throttling. Try it to play Elden Ring from anywhere with no lag.