If sudden disruption happens when you stream or download something from the web as well as play games, unfortunately, you may encounter ISP throttling. In most cases, internet throttling is implemented when an online activity requires high bandwidth. ISP (Internet Service Provider) enforces traffic control to reduce bandwidth congestion and balance its consumption. 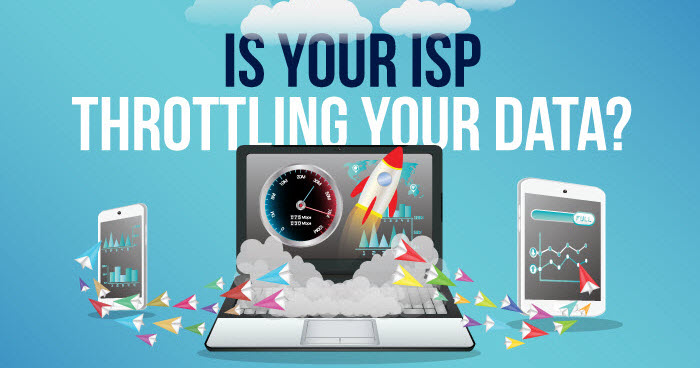 There’s no notification telling you that your internet has been throttled. But if you have noticed that the matter occurs, the solution of how to stop ISP throttling shown here can help you out.

What Is ISP Throttling and Why?

ISP throttling, one kind of bandwidth throttling, is a scheme to restrain online traffic to or from your account by Internet Service Provider the moment you reach the benchmark of bandwidth usage. It’s a deliberate restriction to slow down internet connection.

Why do ISPs throttle internet?

Regulating network traffic is one of the most common reasons. High demands of bandwidth lead to crowded networks in “rush hours”. At that time, ISPs prefer to balance the internet speed to drive  ALL customers to get access to the network successfully. Also, ISPs may throttle internet of anyone who occupies heavy bandwidth to download large files, stream 4K movies or play video games. On the other hand, some ISPs, and mobile providers, for example, set data caps during a billing period. Once you exceed the limit, your internet will be throttled. Moreover, in some cases, ISP throttling comes when illegal online activities are tracked.

How to know if your internet is throttled?

ISP throttling is not the only factor of slow internet speed. Weak Wi-Fi and poor modem/router lead to bad wireless connection while the insufficient internet plan can’t offer enough bandwidth for you. So, it is necessary to make sure whether your internet sucks due to ISP throttling. At first, you can run an internet speed test to compare the actual speed with the data plan. If the actual speed is much slower than the plan, it may be throttled. Secondly, for gamers, it’s better to use the port scanner to check whether the ports, generally as servers for gamers, are throttled. If the status of one specific port is “Rejected”, you suffer. In addition, ISP throttles your internet when you get a faster speed with a free VPN turned on.

Will a VPN Stop ISP Throttling?

That’s right! VPN is more than a method to confirm whether your internet is intentionally slowed. But the easiest way to stop ISP throttling.

Normally, the moment you use internet service, the provider is able to monitor and track you. Your IP address and every movement online are exposed. Therefore, ISP can exactly discover you and throttle the connection. VPN generates a secret tunnel to encrypt the traffic to bypass surveillance from ISP. It helps replace the real IP address with a new one when connecting to VPN server. With VPN, ISP will not know where you are and what you do thanks to hidden IP address and encrypted data. Therefore, if you have discovered ISP throttling and want to stop it, get a VPN.

Well, iTop VPN is a solid free VPN provider that contributes to building the safest and most private internet connection. It applies military-grade encryption on the traffic to prevent your data from being stalked by ISP, organizations and hackers. Thanks to the strict protection, it can not only help you bypass internet throttling but keep your online privacy secure. DNS protection against modification of DNS settings and Kill Switch that can automatically block the connection once the VPN stops working can further prevent data exposure to reinforce the security.

It gathers servers all over the world with the highest quality. Every time you connect a server, you can get a fresh IP address instead of the original one to bypass ISP throttling and geo-blocking. Well, now you can enjoy worldwide internet to stream from Netflix, play PUBG, etc., without worrying about slow or unstable connection. iTop VPN gives full support to multiple platforms. You can install this fast VPN for Windows, macOS, iOS and Android.

How to Stop ISP Throttling with VPN

It is easy to use iTop VPN to stop ISP throttling. Just in 2 clicks, you can get a smoother internet speed.

Step 1. Download and install iTop VPN on your device. You can install it on a computer and mobile at that same time for this best free VPN for Windows PC and other platforms allow you to connect at most 5 devices simultaneously.

Step 2. Launch iTop VPN and click the big Connect button. iTop VPN will automatically connect to the best server for you. Once Connect turns to be Connected, you successfully bypass ISP throttling. 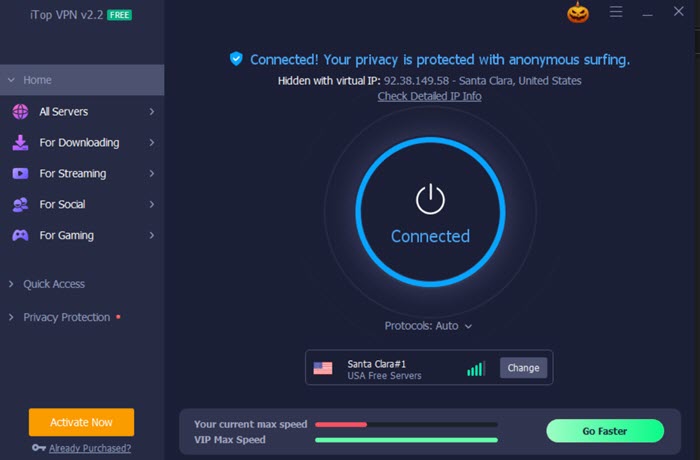 Optional. You are allowed to manually select a server for special purposes, for example connecting to Netflix US. Click All Server > select a US server > Connect.

Addition: How to Stop ISP Throttling Without VPN

Honestly, it is the most effective way to stop ISP throttling with a VPN. But if you want to know how to stop internet throttling without a VPN, the solutions below may be helpful.

What You May Be Interested In: Proxy vs. VPN

ISP throttling absolutely bothers the internet speed, leading to buffering, and lagging when streaming and playing games. iTop VPN, the free unlimited VPN for Windows, Mac and mobiles, points out the easiest and fastest way to stop ISP throttling. It boasts world-class protection on online data to drive you far away from ISP tracking or malicious attacks. It perfectly hides your IP so that the internet speed will not be affected by throttling at all. Also, it can unblock restricted websites, apps and games helping you get better entertainment without hassle.