Blocked by geo-restriction when streaming? Read this post for the best streaming VPN to enjoy movies and TV shows anywhere on Netflix, Hulu, HBO Max..

Streaming services are going viral these days. Instead of watching traditional TV, most people are watching TV shows, movies, live sports shows, and games online through streaming sites, including popular ones such as Netflix, HBO, Apple TV, Hulu, and Disney Plus. While users can enjoy streaming TV and live events online, one big drawback is that these sites are not available in every country or region because of copyright, censorship, and other reasons. To help you out, a streaming VPN redirects your internet traffic through another server in a different location and offers you access to the content worldwide. This post will list 3 best streaming VPN to help you access your favorite streaming sites easily. Read on to know more. 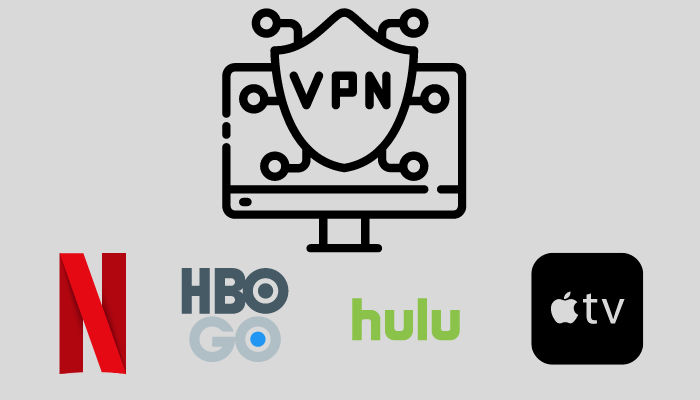 What Makes a Good Streaming VPN

Worldwide servers. The amount of servers definitely counts when it comes to the best streaming VPN competition. With a wide range of servers and locations in the world, users can access as much content as possible and are subject to fewer limitations at the same time. Meanwhile, apart from general servers such as the United States and the UK, the best streaming VPN should also support servers in less well-known locations to meet the full demands of users.

Fast speed. The importance of speed matters when streaming speaks for itself. Just imagine how it feels when the screen shows a heavy lag or simply gets stuck, especially when it’s the highlight of the show. Therefore, the best streaming VPN should achieve constant and solid speed without much lag or delay when streaming.

HD streaming. The quality of the streaming service also matters. The best streaming VPN is supposed to undertake HD streaming, ultra-HD streaming, and any other high-quality videos on different streaming platforms. With it, users can enjoy high-definition streaming without hassle.

After knowing what makes a good streaming VPN, you may wonder what’s the best VPN for streaming. To save your efforts, this post rounds up the best streaming VPN options that meet the requirements mentioned above. Let’s start with the first one, iTop VPN.

iTop VPN is your ultimate VPN solution that holds all the keys to streaming worldwide. This best VPN for streaming offers safe, fast, and stable internet connections with multiple servers around the globe. You can enjoy the following advantages with iTop VPN.

1800+ VPN servers distributed worldwide. As talked about above, the number of servers plays an important role in the best streaming VPN. iTop VPN comes with more than 1800 VPN servers that are allocated in the world, ranging from common ones to rare ones, to help you find a good connection.

Dedicated servers for streaming sites free or paid. iTop VPN offers particular servers designed for streaming. Users can either make use of the free plan to watch Netflix or other streaming platforms with a US server or choose to upgrade to a premier plan to enjoy more dedicated streaming servers. 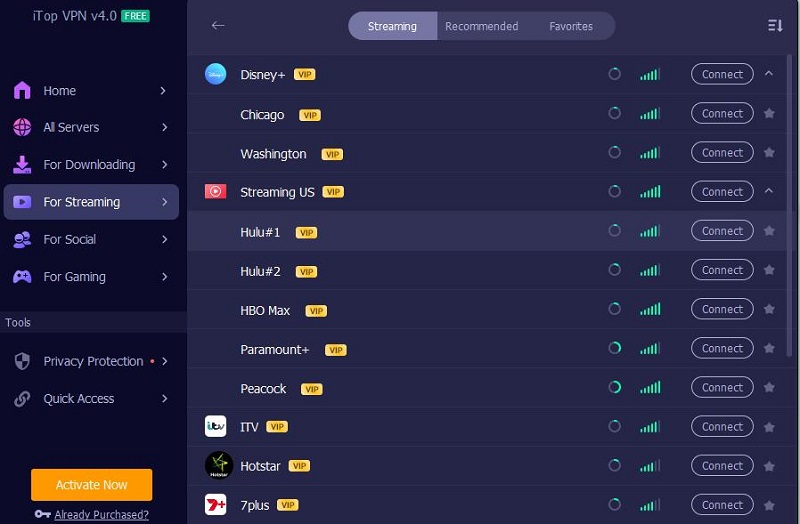 When it comes to the best streaming VPN, the safe VPN ExpressVPN is one you can’t miss. As the leading goat in the industry, this VPN provider bypasses geo-blocking and unblocks most major streaming services, including Hulu, Amazon Prime, and other platforms. Check how it performs in terms of the criteria that evaluate a good streaming VPN. 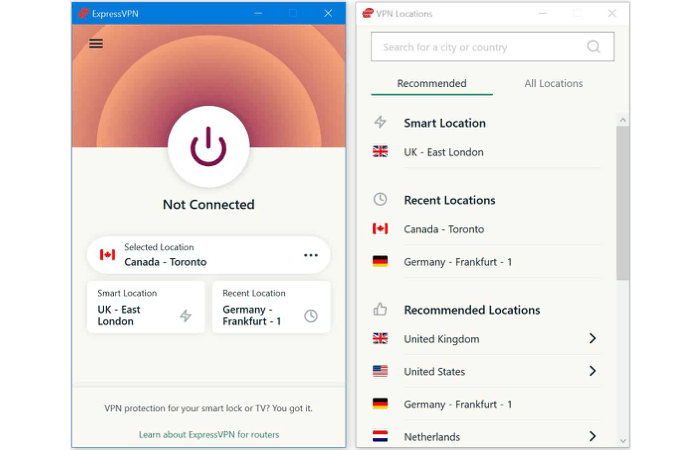 ExpressVPN supports a rather wide range of servers in different locations. Ranked as one of the best streaming VPN, ExpressVPN aims to provide the best VPN service for its users with more than enough servers to choose from.

The speed of ExpressVPN is well up to cover movies, TV shows, and other tasks. No matter whether you want to stream, play games, or torrent, this VPN service is capable of managing consistent speed regardless of which server you choose.

Unfortunately, there are some flaws in ExpressVPN as well. One big downside of it is that it doesn’t offer a free trial. Although there’s a 30-day money-back policy, it still takes some effort to subscribe and unsubscribe. What’s more, this best streaming VPN is quite pricey compared with other competitors. The subscription fee is up to $12.95 per month. If you are looking for a free streaming VPN, ExpressVPN might not be your thing.

You May Need: Best Free Italy VPN for Security and Anonymity >>

SurfShark is one more competent streaming VPN that helps you unblock most of the streaming platforms. Meanwhile, this best streaming VPN is capable of supporting unlimited streaming devices. With that being said, if you have multiple devices, SurfShark is a good choice for streaming. Besides, it enjoys the following features that are worth taking a look at. 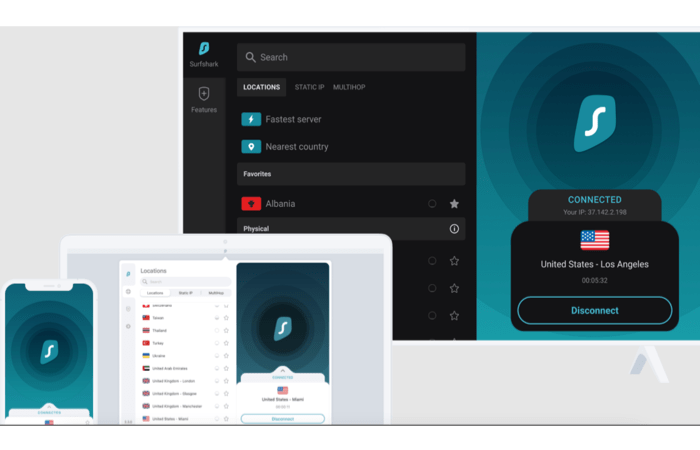 Being a key contender in the best streaming VPN ranking, SurfShark discovers more than 3200 servers scattered in 99 countries. Users can explore thousands of servers to unblock streaming services globally.

SurfShark VPN for PC is also compatible with other various devices, including Apple TV, Xbox, PlayStation, etc. Simply connect SurfShark to your Apple TV and start browsing movies without limitations.

No VPN service is perfect and neither is SurfShark VPN. The first disadvantage of it is the price. Similar to ExpressVPN, there’s no free plan for SurfShark VPN and users have to order monthly subscriptions to enjoy this VPN service. Moreover, it’s worth noting that this streaming service has some issues with Amazon Fire devices. While it’s reported that the company is working on it, it can be disappointing for Amazon Fire users.

A streaming VPN bypasses the geo-restriction and grants you access to global content with guaranteed safety and security. Among all streaming VPN options in the market, this post lists three competent candidates as the best streaming VPNs, including iTop VPN, ExpressVPN, and SurfShark. iTop VPN is the only one that comes with a free VPN no sign up with unlimited data and bandwidth while showing excellent performance in streaming. Download and use iTop VPN to freely unblock content on any streaming site with ease.