Where to watch Breaking Bad? How to fix Netflix VPN ban? Don’t worry, this article will tell you how to watch the show easily with the best streaming VPN.

With compelling narratives and strong characters, the five seasons TV series Breaking Bad simply dominated everything and everywhere. Critically acclaimed by many critics and general audiences, Breaking Bad is one of the greatest television series of all time.
So where to watch Breaking Bad? Whether you are going to binge-watch it for the first or the tenth time, this is the first thing you will Google. Don’t worry, we’ll cover that later. 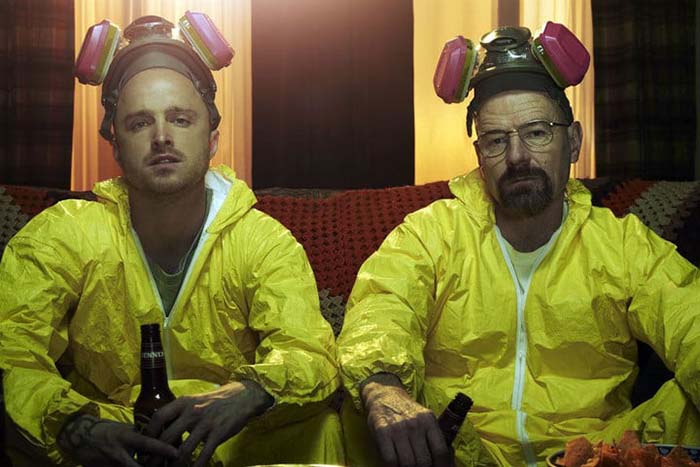 Following how Walter White, a high-school chemistry teacher, a mild-mannered good person, transforms into a mass-murdering drug lord. Breaking Bad is a modern saga turning Mr.Chips into Scarface.
Want to enjoy the most compulsively watchable television ever aired? Here’s a complete guide on where to watch Breaking Bad all seasons in 2023.

Where to Watch Breaking Bad [Include Free]

The streaming platform now has five seasons, all 62 episodes of Breaking Bad available.

Netflix also offers free trials for a month, if you can manage to finish all the episodes in one month, Netflix is where to watch Breaking Bad and Kim's Convenience Season 5 for free.
Netflix is currently available in most countries but not China, Crimea, North Korea, or Syria. You can watch Netflix via browser or apps on mobile and smart devices.

Amazon is where to watch Breaking Bad episodes with reasonable pricing. You can either purchase by episode ($2.99) or pay by season starting from $13.99. 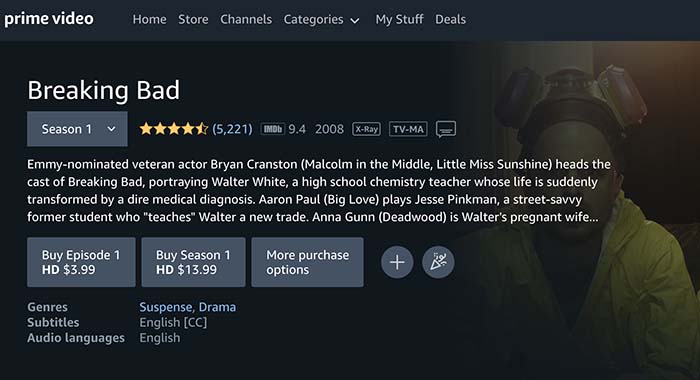 Amazon Prime Video can be accessed worldwide, except for countries like China, Iran, North Korea, and Syria, which means you will need a VPN to bypass the country restriction.
Similarly, Amazon Prime Video offers a free trial that is up to 30 days and has apps compatible with Android and iPhone. 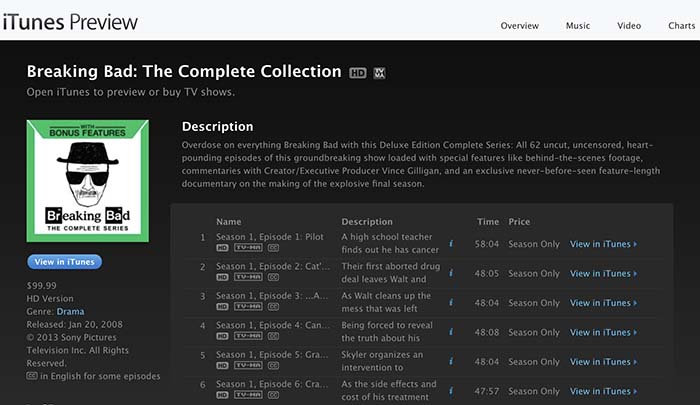 Apple iTunes can be accessed in most countries in the world, but shows, music, books, and movies vary from country to country.
Apple offers free trials for Apple music but not other media, so you will need to purchase based on the pricing above for Breaking Bad.

YouTube TV is where to watch Breaking Bad full seasons via subscriptions. With $64.99 per month, YouTube TV allows you to enjoy 85+ live channels including local cable networks and many more. 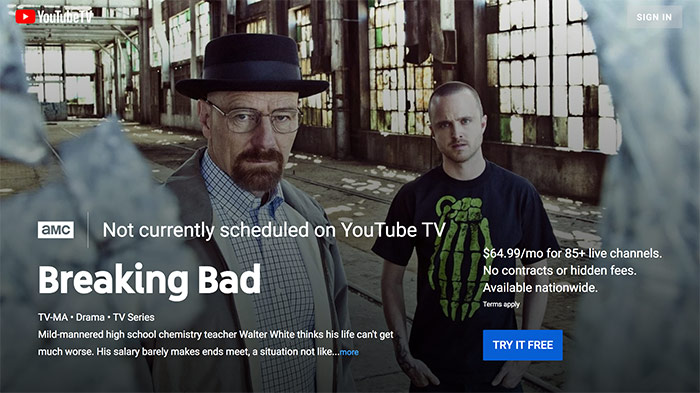 YouTube TV offers limitless storage space for DVR and you can have 3 devices streaming at once. YouTube is compatible with most smart devices and you can simply watch it via browser.
YouTube TV now has a free trial for 30 days and is only available in the US. Countries outside of the US will require a VPN to get around the restriction.

Google Play Store is where to watch Breaking Bad via digital purchase for the whole series. You can pay $1.99 for each episode or go with each season at $9.99. 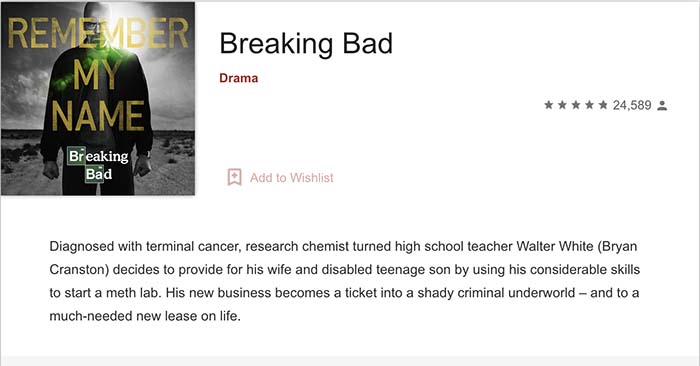 Vudu, the American digital video store that offers full seasons of Breaking Bad at $1.99 per episode and $14.99 per season. 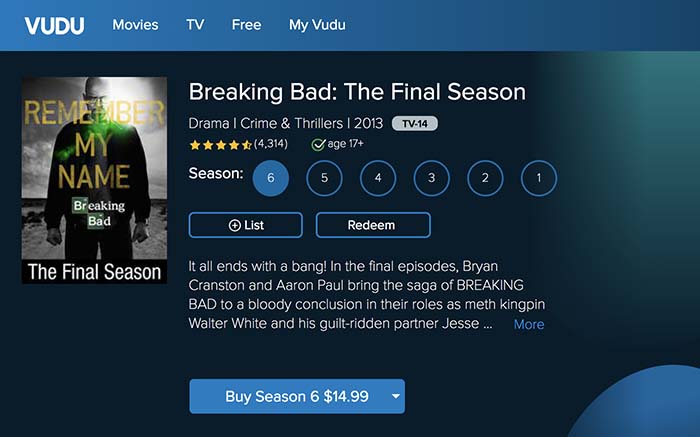 Vudu has apps compatible with mobile devices and you can also stream on Chromecast or any other Smart TVs. However, Vudu can be accessed in the US only. You will need to use VPN or Smart DNS to bypass the restriction.

Don’t Miss: How to Watch House of the Dragon Online Outside US and UK >>

Where to Watch More About Breaking Bad

Where to Watch Breaking Bad in Australia, UK, North Korea

When people search for “where to watch Breaking Bad for free Reddit,” they are looking for tricks to stream Breaking Bad for free or without regional restrictions in some countries. For instance, Netflix is not available in North Korea while Google Play Store TV shows are not accessible for Australia and the UK.
So where to watch Breaking Bad in countries like Australia, UK, North Korea that want to bypass geo-restrictions? The answer is to use Netflix VPN to get around the obstacle. Here comes iTop VPN, the most powerful streaming VPN on the block. With iTop you can successfully crack Netflix’s VPN ban, and enjoy Breaking Bad with ease!

Anyone who has ever used a VPN to unblock Netflix knows that Netflix has a powerful VPN detection system, which is probably the best in the business. That’s why the Netflix VPN blocked and proxy errors often occurred. In another word, only a few best VPNs can work it out and immune to the detection, and iTop VPN is surely the one can save you from the annoying Netflix VPN ban!
iTop can not only the best free VPN for Windows to protect your online privacy and security but also the best tool to help you hide your IP address with 1800+ servers dotted globally. With iTtop, watching Breaking Bad on Netflix, Google Play Store or iTunes is not a problem at all. Just check out iTop’s benefits below for video streaming! For users using MacOS as their desktop, there are also Mac version of iTop VPN for them!
Fast connection
With iTOP VPN, you can stream Breaking Bad with an ultra-fast connection, thanks to iTop’s advanced UDP protocol that allows faster speed connection. No more Netflix buffering and you can enjoy streaming with iTop’s fastest global server!
Stable network
With more than 1800+ global servers coverage, iTop will connect you with the nearest server possible. Whether you are from North Korea or Russia, iTop can help you access any streaming service with the most stable connection.
Special node for streaming
iTop offers the best streaming VPN service, which allows you to access different streaming platforms more quickly and easily. Netflix, Hulu, HBO, Disney+... you name it! With optimized servers, you can binge-watch Breaking Bad nonstop!
Unlimited bandwidth
Streaming often requires a super network because of a lot of data transferring. With iTop, there is no cap for bandwidth, which means you can enjoy your favorite Breaking Bad without worrying about the data exceed the limit.

How to Watch Breaking Bad with the iTop VPN?

Step 1. Launch iTop VPN, and select “For Streaming” in the menu.

Step 2. Choose “Netflix” server on the next screen, or you can select “All Servers” to find more streaming VPNs. 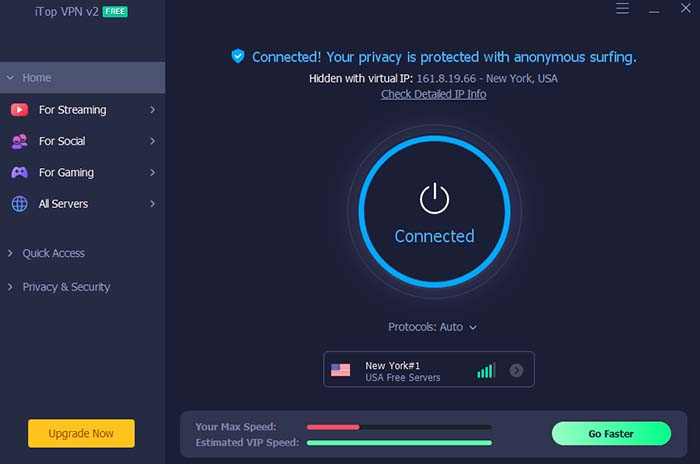 Step 3. Go back to the main screen and click the Connect button to connect to the Netflix server. 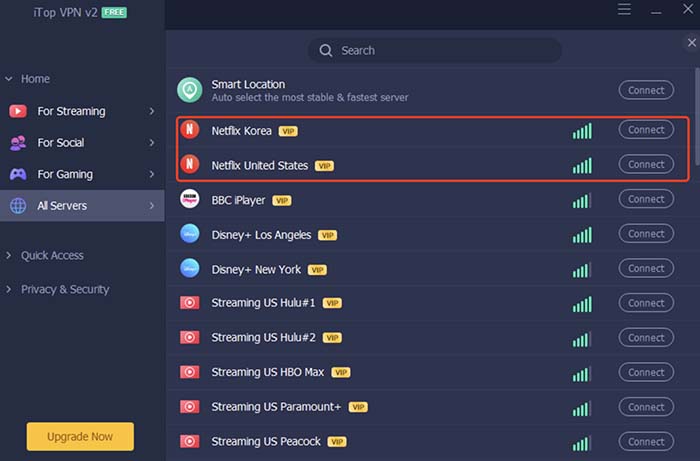 That's it! As easy as breathing! Now you can enjoy Breaking Bad with the fastest connection!  And there is also VPN  for iOS and VPN for Mac.