3 VPNs for ITV: Which One is The Best?

Which is the best VPN for ITV? Check out this article's top 3 VPNs that you can use for watching ITV free and fast. No buffering or endless loading.

ITV is an incredibly popular family of UK television stations that airs numerous original British television programs and films, as well as sports shows. However, If you are in the United States or anyplace else outside the United Kingdom, it is unlikely that you will have access to ITV over a standard internet connection.

This is due to the fact that ITV content is restricted to IP addresses within the United Kingdom. But, you can still access ITV with the help of a VPN (Virtual Private Network). In this article, we will provide 3 VPNs for ITV and also premium UK nodes that you can use for free to watch ITV. 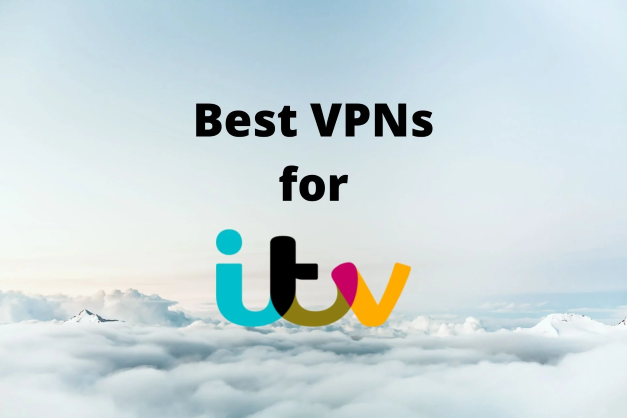 The first VPN for ITV that we like to introduce is ExpressVPN. ExpressVPN is one of the most popular VPN services, with more than 3 million subscribers globally. ExpressVPN offers servers in more than 90 countries, making it an excellent VPN for ITV streaming. It can also access Netflix and All 4, among others, in a secure way. Express VPN is one of the fastest VPNs available on the market. However, it is also one of the market's most expensive VPN services.

ExpressVPN is available for Windows, Linux, macOS, Android, iOS, and routers (custom app). The monthly cost is $12.95, with discounts available for advance payments of six or twelve months ($9.99 and $6.67, respectively).

Below are the pros and cons of ExpressVPN

ExpressVPN is one of the fastest VPNs mostly because of its unique Lightway protocol. Lightway is open-source and offers higher bandwidth, fast switching between wireless and mobile networks, and robust security. The Lightway protocol encrypts communication with AES-256-GCM and ChaCha20/Poly1305 ciphers, and employs D/TLS 1.2 for server authentication. With this fast and secure ITV VPN, you will get a good experience accessing ITV.

ExpressVPN is an excellent option if you want a VPN that does not store logs. It is an authenticated VPN service with no logs. It has passed both independent audits and verification testing in the real world, thus making it a private and safe VPN for ITV.

Unfortunately, ExpressVPN does not provide a free trial to use its service. So you will have to subscribe to their membership plan to use this ITV VPN.

Another disadvantage of ExpressVPN is that it is more expensive than the majority of its competitors.

The next VPN for ITV is iTop VPN. iTop VPN is most well-known as a free VPN service and compared to some of its rivals, it offers a rather generous service. iTop VPN provides more than one hundred virtual locations in Russia, Brazil, Japan, India, the Philippines, the United Arab Emirates, and many other nations. iTop VPN is available on Mac, Windows, Android, and iOS.

iTop VPN has free and paid plans. The free plan offers 700MB of data per day (21GB per month) and a selection of 16 locations (including the United States and the United Kingdom), far surpassing the competitors. Meanwhile, a paid one grants access to more than 100 locations and more than 1,800 streaming and gaming-optimized servers.

The specialty of iTop VPN is that it has a special node for watching ITV. With the paid plan, you can use the ITV-optimized node to watch ITV content and use the US and UK nodes for the free plan. Those nodes provide fast streaming, and with them, you can watch ITV in HD and Full HD quality. Besides that, iTop VPN also has secure encryption. your private information stays safe while you are watching ITV. 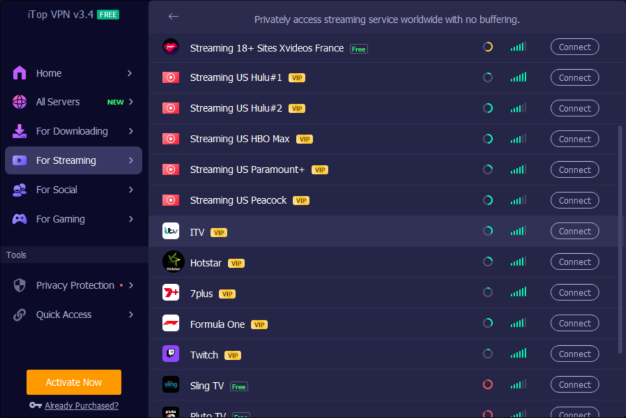 Below are the pros and cons of iTop VPN

The monthly fee of this ITV VPN is $11.99 per month. Paying six months in advance reduces the monthly cost to $6.99 per month while the annual plan costs $2.31 per month.

iTop VPN is also a safe VPN because it does not store any logs of its users' online activity.

iTop VPN has limited locations compared to its competitors.

Lastly, the third ITV VPN is Hotspot Shield. Hotspot Shield is a VPN service that is simple to use. It offers servers in over 55 countries and does not affect internet performance. It also unblocks the majority of streaming services, including Netflix, BBC iPlayer, ITV, and more. It can be accessed through Windows, macOS, iOS, and Android.

Hotspot Shield has undergone constant development over the past few years and is now available on routers, Linux, and smart televisions. It is also recognized for its patented service, Catapult Hydra Protocol, which provides high speed.

Below are the pros and cons of iTop VPN

This is one of Hotspot Shield's most fascinating and unique features. Powered by Catapult Hydra security, the VPN offers ultimate security and speed.

A CSIRO research found that Hotspot Shield employs tracking codes to collect information about its users, which it subsequently sells to advertising companies. They also discovered that Hotspot Shield routinely redirected user traffic through one of its partner networks in order to profit from purchases made by VPN users.

● No VPN Kill Switch on macOS, Android, and iOS

Your ISP and the owner of the websites you visit will be able to view your personal information if your VPN connection suddenly drops during your browsing session. In order to prevent this, some VPNs have a kill switch that immediately disconnects you from the internet when the VPN connection breaks and reconnects you when the VPN server of your choosing becomes operational again. Unfortunately, Hotspot Shield only has this feature on Windows.

How to Use VPN for ITV?

As we saw from the table above, iTopVPN is the best Free VPN among them. Here are the steps to use iTop VPN.

Step 2. After that, open the installer and follow the directions on screen. Then, you can either create an account or click "Connect" to begin using it immediately.

Step 3. After pressing the "Connect" button, you should see the "Connected" message and be connected to a fast and secure VPN. 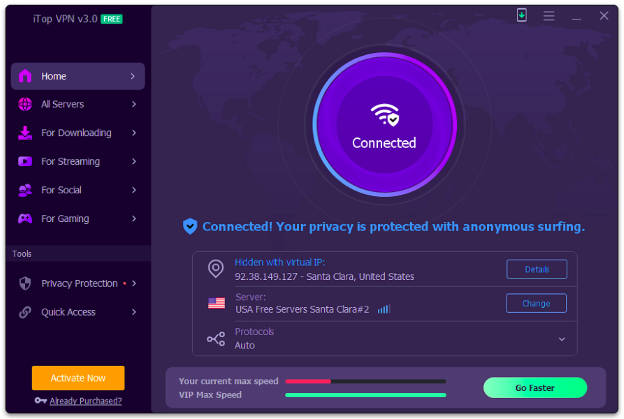 Last, to conclude all the content above, a comparison table among these 3 VPNs is also made for you to choose the best one!

After knowing and comparing these 3 VPNs, we can see that iTop VPN is the best free VPN for ITV among them. ExpressVPN is fast to watch ITV, but it doesn’t provide a free plan. Hotspot Shield VPN is excellent with its Catapult Hydra Protocol, which provides high speed but its privacy and logging policy is questionable. Meanwhile, although iTop VPN does not provide many server locations that you can connect to, but it offers 700MB of free data a day and it is also safe to use. So, what are you waiting for? Download iTop VPN now to watch ITV for free.