It's frustrating when you find you get blocked by Pinterest for no reason. There are two possibilities for this happening. One is that your Pinterest account is intentionally blocked if you violate some terms of service. The other is that the Pinterest platform as a whole is geographically restricted, especially if you are in a country with censorship or a location having network limits. Unfortunately, there is not so much you can change for the former, while you can easily unblock Pinterest in the second case using a VPN. For instance, Pinterest is not accessible in China due to the Great Firewall of China, but a VPN allows you to unblock Pinterest for image discovery, collection, and storage, no hassle! 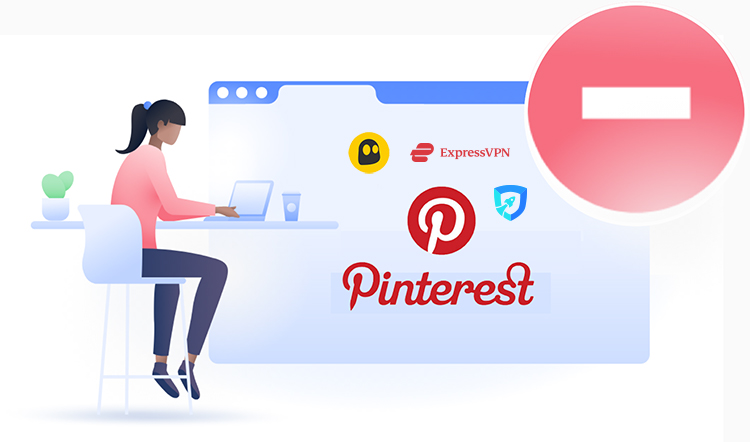 Similar to other social media platforms, Pinterest personalizes content for users based on your location, which is the reason why the site you access in the US is different from that you see in the UK, France, or Japan. Therefore, to unblock Pinterest content is to hide or change your digital address, or known as IP address, which could be achieved through VPN services.

Here lists some best VPN for Pinterest and introduces how to unblock Pinterest images, GIFs, and videos with these tools.

iTop VPN is the most preferable VPN to unblock Pinterest. It's a powerful and 100% free VPN proxy that routes your data through a large number of servers based in almost all parts of the world. 1800+ servers in over 100 countries enable you to change your IP address so that you can pretend to visit Pinterest from the US or other countries you'd like to.

Most people take Pinterest as an idea-sharing platform, where they save, collect, store, and bookmark visual works like images, GIFs, screenshots, and mini videos. iTop VPN offers unlimited bandwidth in its 100% free version, meaning that you can enjoy your visual feast with no lag.

To unblock Pinterest, another function that you should key in on is data encryption. iTop VPN provides security protocols that can encrypt your online traffic. The 256 bit AES encryption makes it difficult for Pinterest to monitor or identify your connections, ensuring that you have a risk-free picture bookmarking time.

Since you may need to unblock Pinterest on different devices, iTop VPN has perfect compatibility with mainstream digital devices. You could access Pinterest through Windows, Android, and iOS simply using iTop VPN that supports up to 5 simultaneous connections. It is also a VPN for Mac for all the Macs with macOS 10.15 or later.

iTop VPN, as the best VPN for Pinterest and other social media with geo-restrictions, is the curated selection of unblocking Pinterest in terms of both advantages and disadvantages. It's the only Pinterest VPN having a completely free version, and its paid version is recommended for security, speed, no-log policy, global servers, affordable price, and user-friendly interface. Though it has less multiple-device support, it's more than enough for daily use.

Another outstanding VPN to unblock Pinterest is ExpressVPN. Founded in 2009, ExpressVPN is one of the world's largest VPN service providers. It's competitive when it comes to bypassing geo-restrictions for social media platforms like Pinterest so that you won't miss out on the best platform to share visual ideas just because of your restricted location. It protects protect users' privacy and security online with these features:

ExpressVPN is the same as iTop VPN using military-grade encryption to protect your privacy from those who might monitor, track, or even sell your online activities. It also applies 256 bit AES encryption.

ExpressVPN spreads 160 server locations in 94 countries, making sure that you can unblock Pinterest from different places, especially when you are visiting this platform from a country that blocks or censors Pinterest or when the network in your office or school doesn’t allow access to Pinterest for bandwidth preservation or other reasons.

As one of the best Pinterest VPNs, ExpressVPN satisfies users with ultra-fast speeds and minimal buffering when you need to cache images in HD or download Pinterest videos.

ExpressVPN, undoubtedly, is a feasible choice to unblock Pinterest content from restricted locations based on its wide server locations, unlimited bandwidth, and fast speed. But this VPN for Pinterest provides no free or trial version, and the pricing for subscription is far higher than similar products.

The third best VPN to unblock Pinterest is CyberGhost VPN. The reason for being on the list is CyberGhost VPN is one of the VPN services providers that claim to get your Pinterest unblocked no matter where in the world you are. Based on the following features, it gives you access to the full Pinterest platform, including pinning photos, creating boards, bookmarking images, and getting visual items organized.

CyberGhost VPN offers a higher limit for connecting multiple devices at the same time. Up to 7 devices could be protected with a single subscription, which is convenient if you have several different computers, phones, or tablets.

Considering traffic encryption, browsing speed, and practicality, CyberGhost VPN does provide an alternative plan to unblock Pinterest geo-restrictions. However, it's ambiguous in terms of users' privacy as it's using scripts such as Hotjar to record sessions and doesn't make it transparent when it comes to the ownership of Kape Technologies, formerly Crossrider which was a digital advertising firm.

Though the three best Pinterest VPNs have been narrowed for your Pinterest unblocking, you could still have a hard time weighing the pros and cons of them. In Summary, iTop VPN is the top choice as ExpressVPN is not wallet-friendly and CyberGhost VPN has a dubious privacy issue. On the contrary, besides high-quality virtual private network services, iTop VPN outperforms the other two with free and affordable subscription plans and follows a strict no-log policy to protect users' privacy.

After deciding which VPN is the best tool to bypass Pinterest restrictions, it's time to put it into effect. This part shows how to unblock Pinterest and access your content from anywhere step by step.

Step 1: Sign up iTop VPN with your preferable plan. 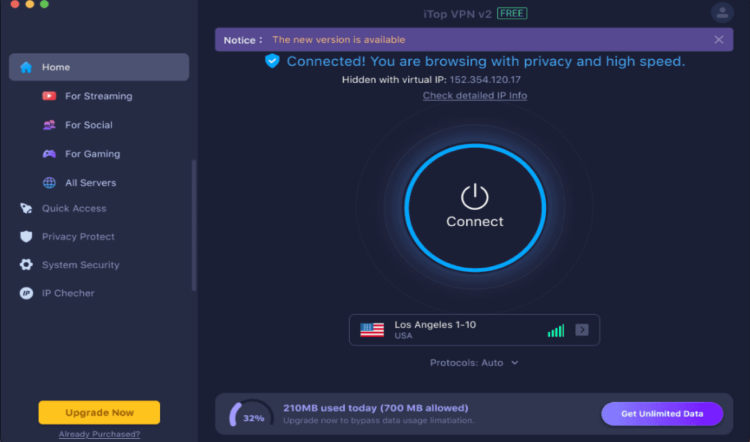 Step 4: Then you are free to unblock Pinterest at school and work, or access it in China, India, or  anywhere else in the world.

Be it a phone or computer, getting blocked by Pinterest is one of the most common situations you could face when using the Pinterest app. If you can't load content on Pinterest due to censorship or limits on your school or office network, a Pinterest VPN from iTop is the solution you could rely on. To unblock Pinterest, you just need to pick a region in this VPN for Windows and get ready to save your favorite images, GIFs, and videos from different Pinterest boards.