Sling TV is not available in your country? Get the best free VPN for Sling TV to unblock and watch Sling TV outside the US. Dedicated servers, fast speed.

Sling TV is an American streaming television service for on-demand movies, live TV shows, news, live sports and entertainment with a selection of channels such as A&E, BET, Cartoon Network, Discovery Channel, Disney Channel and so on. At an affordable price, you can watch on the most-used devices: Apple TV, Google TV, Fire TV, XBOX, Air TV, Roku... Well, Sling TV is not available globally. So virtual private network (VPN) is such a convenient software to help you get access to Sling TV fast by changing your IP when you’re not in the US. What’s the best VPN for Sling TV? Here is a good free Sling TV VPN with regard to fast speed, no-log policy, price, as well as important features, some of which are free to unblock and watch Sling TV. 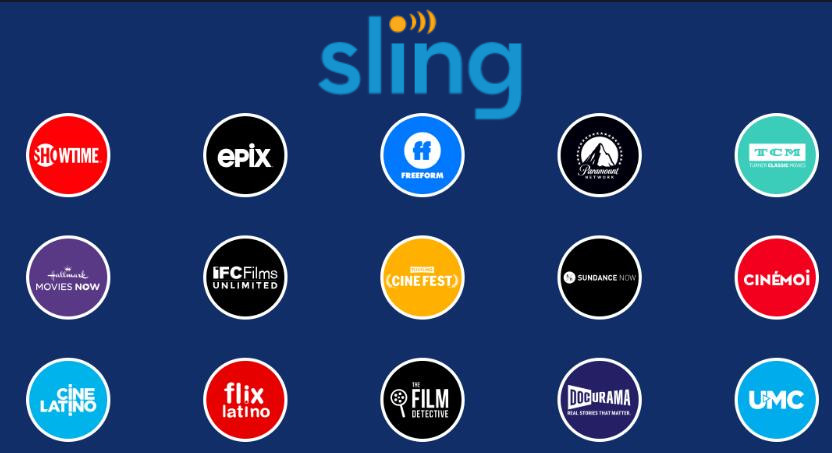 Sling TV has been a top streaming sites for shows, movies, news, and sports. It allows you to access local channels including ABC, CBS, FOX, NBC for free and more channels like AMC, BBC America, CNN, Cheddar, Food Network, to name a few.

Sling TV is only available in the US. Get a geo-restriction-breaking software VPN to watch Sling TV outside the US now.

iTop VPN is the best free VPN for Sling TV for several reasons. First, it’s a free VPN no registration for Windows, Mac, Android, and iOS. New users who download and install the VPN can try the free version no logging in, and no credit card. If you’re satisfied with it, you could buy a pro version to enjoy more features. Unsatisfied? Just uninstall the VPN in a flash. Second, it has several free servers in Los Angeles, Secaucus, and Miami in the United States, which helps you unblock and watch Sling TV for free and other streaming sites only available in the US. Third, it is a fast VPN as some of its free servers using the OpenVPN protocol are tested to reach the speed of 400Mbps. Its premium version offers high-quality servers with low ping, fast speed for connection, uploading, and downloading.

Go to read to learn more important features of the Sling TV VPN.

Zero-log policy. Zero-log is a basic feature of a VPN that is committed to safeguarding every user’ privacy and security. The free VPN has a strict no-log policy and will never record or track any data of yours.

Kill Switch. Turning on the feature in the Privacy Protection settings, you can make sure that none of your data or privacy will be leaked in case your VPN disconnects unexpectedly by means of cutting off all internet traffic.

DNS protection. DNS (domain name services) is used to identify computers, services through the internet. Unsecured DNS may lead to bad results like a higher risk of data breach, service downtime, and others. iTop VPN prevents your system DNS settings from being modified.

Ads block. Ads can be seen on many sites in the format of popups and banners. Blocking ads online will speed up the page’s load time and get a clean web page. Besides, it can stop getting personalized ads by tracking your location, interest, or browsing history. 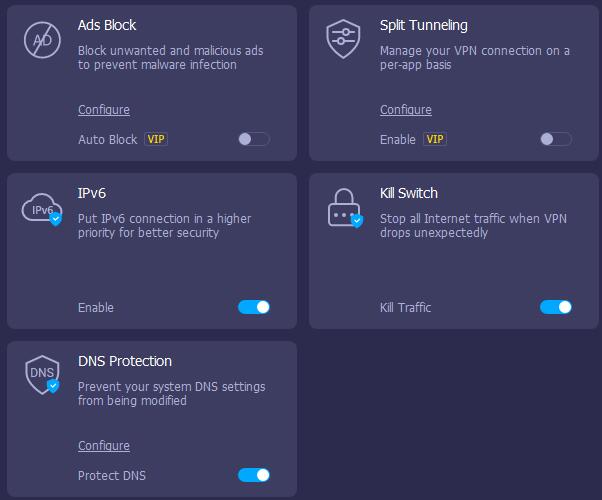 5 simultaneous connections. iTop VPN for Windows, Mac, Android, iOS allows you to connect up to 5 devices simultaneously with one account.

Money-back guarantee. iTop VPN pays much attention to user experience. So 30-day money back is guaranteed regardless of any situation.

You can watch hot shows, sports and music on Sling TV without any limitation by using iTop VPN. And the steps to use the VPN to unblock Sling TV are easy.

Step 1: Download Sling TV VPN for PC and mobile and launch on your device.

Step 2: Click For the Streaming option to find dedicated free servers for Sling TV. Click the connect button on the right and enjoy watching Sling TV whenever you’re! 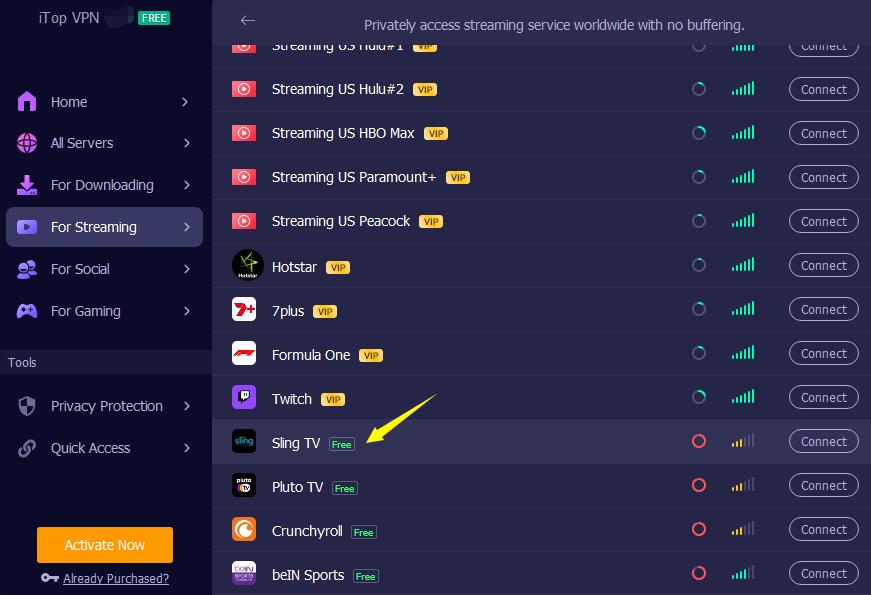 Hoop Dreams, The Miles Davis Story, Black Panther, most hot shows and movies can be found on Sling TV. Even if you’re not in the US where can visit Sling TV without blocking, try iTop VPN, a free Sling TV VPN to enjoy your favorite shows. You can also enjoy other streaming sites like Disney+, Hulu, Paramount, Peacock, Hotstar, Twitch, and so on with iTop VPN.