How to & Where to Watch F1 Live Free Around the World

F1, short for Formula 1 or Formula One, is the highest class of international racing for formula racing cars. It has been one of the most stimulating games in the world as drivers drive the fastest regulated road-course racing cars on the tracks graded 1, the highest grade rating issued by the FIA. A Formula 1 season consists of a series of races, known as the Grand Prix. The Grand Prix in 2022 starts from March and ends in November. But not every place in the world can stream Formula 1 and witness every highlight easily or without restriction. How to watch F1? Where to watch F1 without cable in US? The article offers an easy way to watch Formula 1 live by using a VPN. 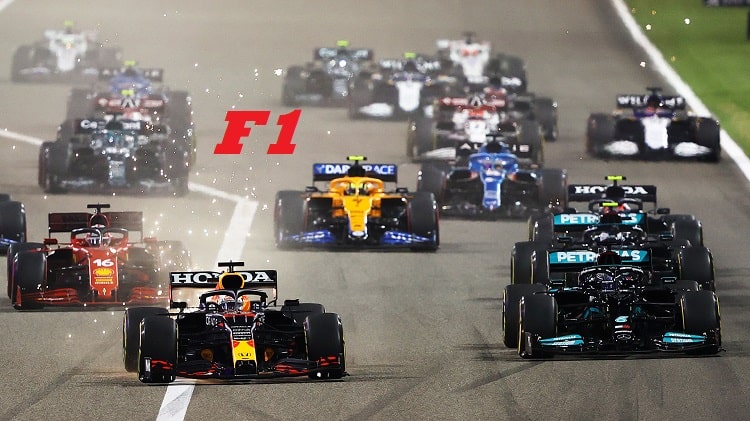 Best Free VPN to Watch F1 Live Stream Wherever You Are

Watching F1 live everywhere is not accessible for geographical restrictions and broadcasting copyrights. How to watch F1? Don’t worry. A VPN can help you get access to most streaming sites and watch live sports and games whether you’re working or traveling abroad. Here we recommend a premium VPN that enables you to stream online with HD and fast speed - iTop VPN. iTop VPN has 1800+ servers distributed around the world, which means you can change to any country or region easily and get access to local streaming sites for watching F1 and other games. More importantly, it has a free version that allows you to experience streaming on Sling TV, Pluto TV no registration, no credit card. If you’re satisfied with the free VPN, upgrade to the VIP version now and enjoy global streaming platforms like Netflix that house large quantities of shows, films, and movies, live more than F1. 5 simultaneous device connections are supported.

Watch F1 Live at Any Place

You may miss some F1 games for geo-restriction and have to watch replays unreluctantly afterward. What a pity thing for F1 lovers or fans! iTop VPN, with global servers in the world, allows to watch F1 live and witness the winner of the Grand Prix. Want to watch next the Grand Prix held in Canada, Great Britain, Hungary in the form of live broadcasting? iTop VPN for Windows, Android, iOS and Mac is your best choice!

Some people may worry about low internet speed caused by VPN connection. You can be worry-free with iTop VPN as it has high-quality servers with fast speed for different locations and regions. Unlimited traffic and unlimited bandwidth. Watch F1 live with HD and no lag.

Except for the excellent services mentioned above, iTop VPN, a safe VPN,also protects your online safety with strong encryption. Ad-blocking features block ads to help browse content with a better experience. Split tunneling, optimized gaming servers, static or dynamic IP, DNS protection..., these are your privileges as a VIP member.

How to Watch F1 GP Live with VPN

The best free VPN for PC and mobile enables you to enjoy F1 at any place. How to watch F1 now with iTop VPN? Follow the detailed steps below.

Step 1: Download and install iTop VPN on your device by clicking the download button below. (Want to be a VIP member and use advanced servers directly? Click the buy button. )

Step 2: Choose the “For Streaming” option, and you can find the server Formula One. Click the “connect” button on the right. 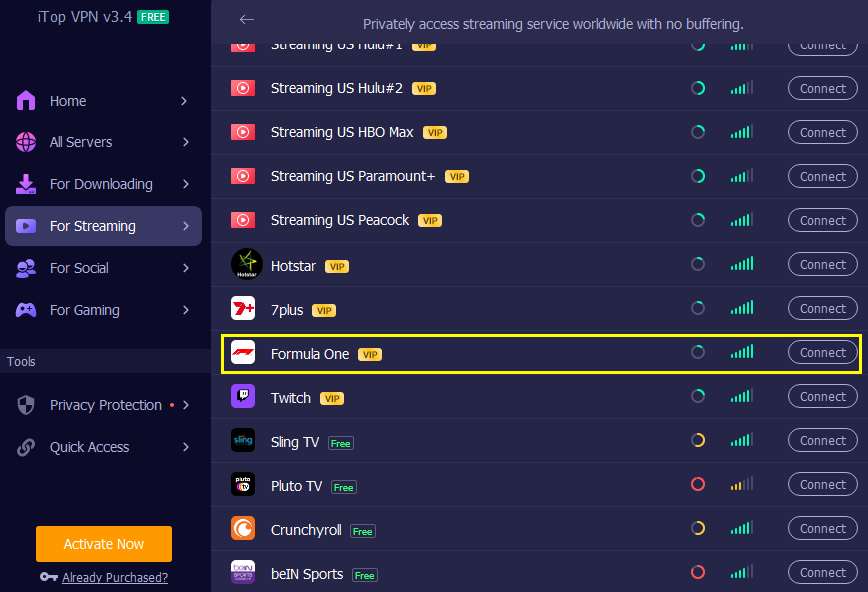 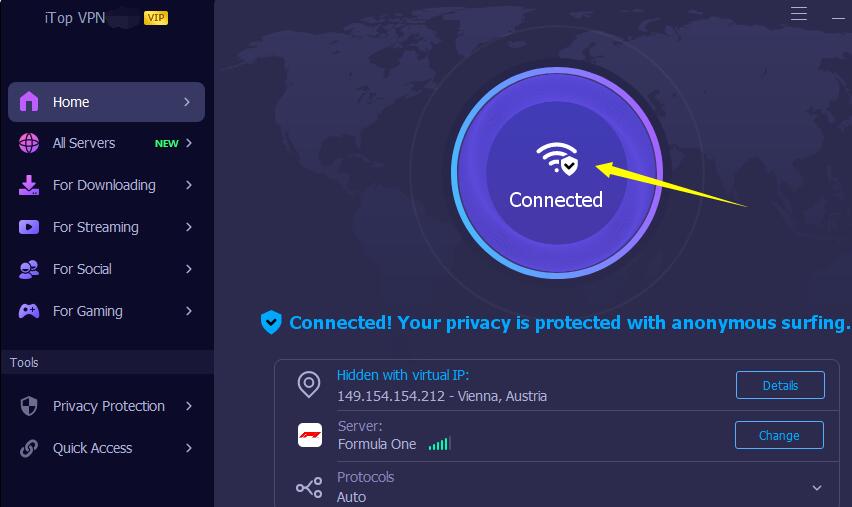 Also Read: How to Watch Love Island UK in the US and Anywhere Abroad for Free >>

Where to watch F1 live online without cable? F1 live can be viewed on some streaming sites introduced below. But these sites are not accessible in every country. If you live or travel in a country that is not available for a certain streaming site, get iTop VPN to help you bypass geo-restriction.

1. Watch F1 Live on F1TV in Most Countries

F1TV is a huge F1 library for F1 lovers or professionals, where you can find and watch every F1 racing ongoing and watch exclusive live shows and documentaries produced for F1. Live leaderboard data, real-time telemetry, live drive maps and tyre usage history, these data can be viewed. You can live stream all track sessions from the GP weekend as well. Besides, under the Archive, it has stored precious recorded videos for previous games from 1979 to 2021. 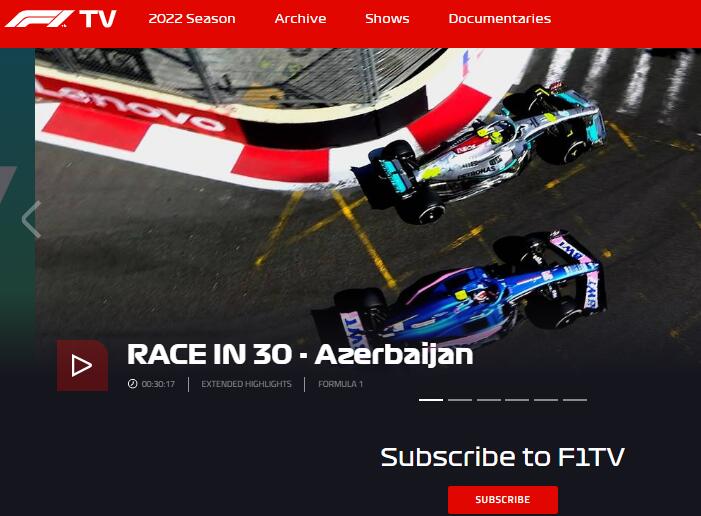 Watch all the races replays for $26.99 per pear

Sling TV lets you stream live television and on-demand content over the internet from huge channels local and international like A&E, ESPN, ESPN 2, ESPN 3, Bloomberg Television, CNN, and Cartoon Network. It claims to be the first app-based TV service and has been compatible with many devices over time. Live sports like F1, news, hit TV shows and movies are available. 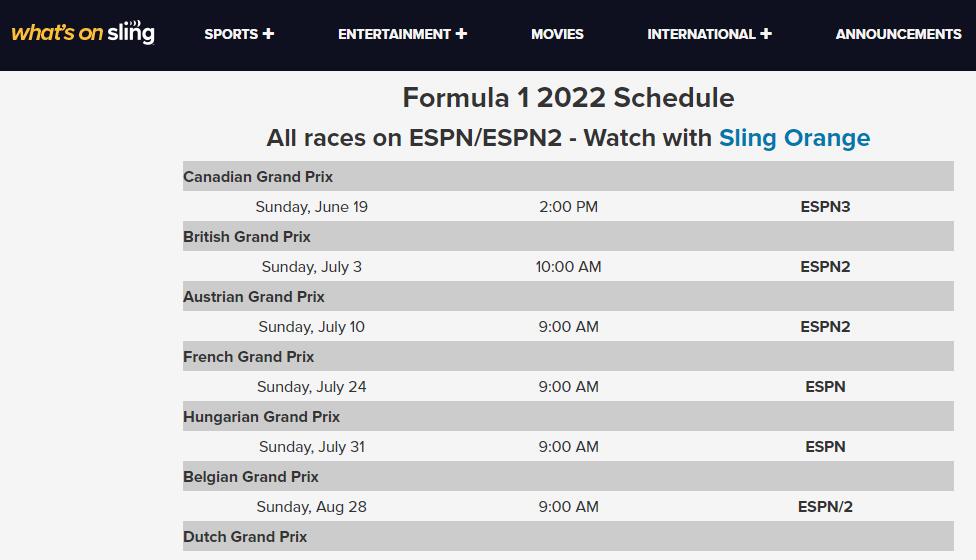 Available on a dozen of devices including Android, iOS, Roku, Chromecast, COX, X-Box

Sling Orange: $35 a month with 31 channels and 1 device stream, good for NBA and families

Sling Blue: $35 a month with 41 channels and 3 devices stream, good for entertainment and news

Fubo TV, founded in 2015, is an American streaming service for customers in the US, Canada and Spain that primarily focuses on channels that distribute live sports. It has 100+ channels and cloud DVR is included. ESPN, ABC, NBC, FS1, NFL, beIN SPORTS... These channels are available in the site on the most popular devices. Its channel lineup contains more genres: popular shows like Yellowstone, news like Fox, and movies like Harry Potter and the Deathly Hallows. 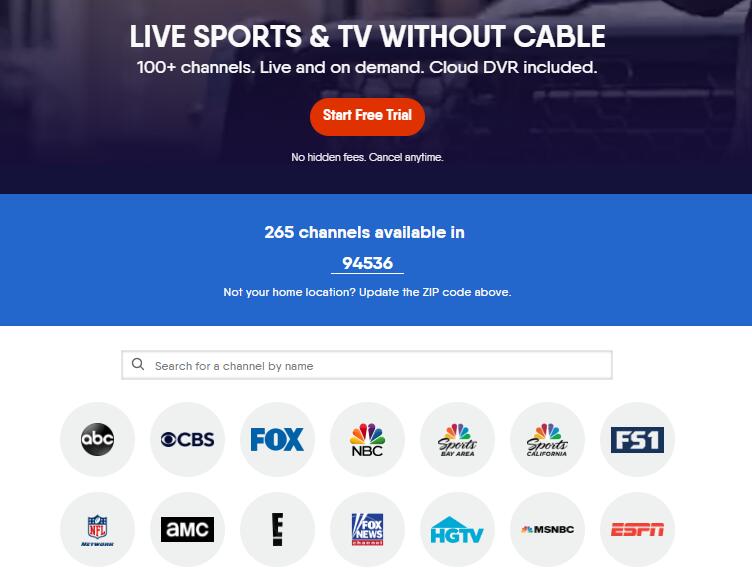 Note: If you want to watch F1 on your cable TV, US cable sports channels ESPN and ESPN 2 are what you want.

F1 racing is on-the-go. Have no idea where to watch it due to geographical limitations? Wonder how to watch F1? Where to watch F1? iTop VPN can solve the 2 problems at one as you can stream Formula 1 live with its dedicated Formula 1 server. Fast speed, no lag, high definition, unlimited traffic and bandwidth. Download now to get iTop VPN.