Best VPN Reddit 2022 with the Most Upvotes and Recommend

Fumbling out the most suitable VPN for you from Reddit could be one of the wisest ideas you’ve ever come up with. Reddit has been widely accepted as a handy platform where real users exchange ideas, and share experiences. Have no idea which VPN to choose? Reddit could tell you. This best VPN Reddit recommendation concludes the opinions from the soberest Reddit users, aiming at giving a complete list of the most upvoted VPNs, covering the fastest, safest and easiest to use VPNs you may never hear. Playing games, streaming online, torrenting, unblocking Reddit and other sites and apps... You can use these Reddit recommended VPNs. Let’s dive in! 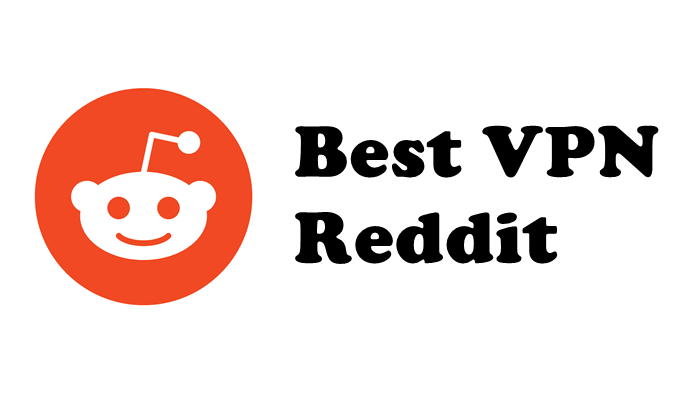 Scrounged from the most followed VPN community on Reddit – ‘r/VPN’, the 6 best VPN service  Reddit have been sifted out. And based on the most comments, upvotes, and reviews of all participants, the features, and traits of each VPN will be introduced alongside too.

As one of the oldest magnate VPN providers on the market, ExpressVPN boasts its bountiful features to safeguard users’ using experience and multiple compatible devices. This VPN bears a self-developed protocol to encrypt users’ data. The connection is not a penny worse than the security it provided to users, nearly 135 Mbps is promised, which means ExpressVPN users are offered blazing-fast Internet speed without the throttling imposed by ISP.

• I've never had any security issues with it, has always worked amazingly well.

• Expressvpn is the only one I truly vouch for.

Except for CyberGhost VPN, Nord VPN is the one to possesses the most servers on this planet. With up to 5300 different VPN servers located at every corner on the world map, users can literally connect to anywhere enjoying all the exclusive content once blocked in their countries. One thing worth mentioning is NordVPN’s impressive data transmitting ability. Statistics show that this VPN lifts your Internet speed to the next level, causing no latency as well. Other useful features that Reddit users found helpful are the ‘split-tunneling, ‘Tor connection’, and the reliable ‘WireGuard VPN technology’ etc.

• I had configuration issues using Nord on a router.

• It has a built-in ad blocker.

• It is a no-log VPN provider.

• NordVPN has always done a good job when it comes to unblocking services in other countries.

iTop VPN is selected best VPN Reddit here for amending some key features that those most commonly seen VPNs are currently lacking. The most noticeable features of this free VPN are its unconventional features including the system enhancing function, DNS Protection, and automatically cleaning your Browsers. Besides these rarely-added features, iTop VPN also delivers standard performance on data protection, speed acceleration, and unblock geo-limitation. Redditors like one best part of it – 700MB traffic is offered each day for every user. Don’t hesitate to give it a try.

• I use this VPN for Netflix, and everything so far so good.

• iTop VPN is the only one that I really know of that does a good job at preserving as much speed as possible.

This best VPN Reddit is a little bit more expensive than its competitors. But accordingly, it manages to offer extra features to its users. The most mentioned functions of CyberGhost include the ad block feature and malware-fighting feature, that’s kind of rarely seen in the industry, but iTop VPN happens to be equipped with the same ability. Okay, other things worth talking about are its services – the 45-day money-back policy, safe payment such as PayPal and Bitcoin all prove it is a reliable VPN. Besides these most frequently asked facets of a VPN, CyberGhost also does a good job in providing the biggest number of servers, nearly 6900+. And the best part of it is that it ensures that users’ traffic comes from the same location, making it nothing like VPN traffic.

• CyberGhost is like 100x better than PIA and cheaper and care A LOT more about their users.

• CyberGhost seems to be more open and honest about things with its users.

TunnelBear is the second VPN mentioned today that offers free traffic each day to users. The first one is iTop VPN. But it falls short in providing only 1.5GB traffic per month. TunnelBear could be used without download and installation – it’s an unexpected extension. In terms of performance, TunnelBear adopts the OpenVPN protocol, and that’s the only choice, a little bit limited but generally acceptable. But the locations and servers are limited, approximately 27 counties are available, 3000+ servers are offered, way less than its competitors.

• Tunnelbear looks fine to me and they are not really a free service.

• I had been using my giant Tunnelbear just fine to view a popular streaming site.

This famous Reddit VPN possesses literally every core feature that a high-quality VPN should be equipped with. As a distinguished and powerful VPN, Surfshark’s competitive performance comes with pricy expenses, and that’s rational since you can share one license on numerous devices. Surfshark’s expensive plans also catalyst some hardcore features including the split tunneling function, reliable protocols and multi-hop function, and Smart DNS. Other additional features including ads block, Surfshark Alert, and Surfshark Search are also useful to a certain group of advanced users. But the latter two features cost extra money and the choices lie in you.

• I’ve been with Surfshark for a while now. And every time I get into a bump or issue, they always come through.

How to Watch Netflix with a Qualified VPN?

Here’s an explicit tutorial on how to use a VPN for Netflix with the lighting-speed data transmitting. Let’s take iTop VPN as an examination and see how does it perform in connecting to a VPN.

Step 2. According to your need, please choose a server. iTop VPN prepares dedicated servers from all over the world, you can navigate to Germany, Russia, and any other locations according to your demands. 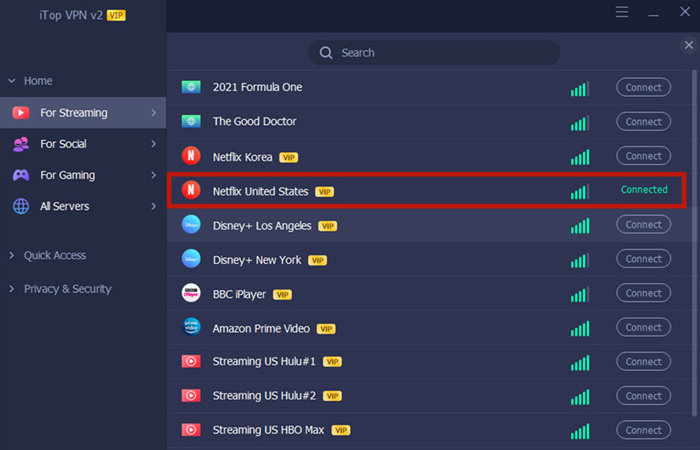 Step 3. Hit the ‘connect’ button right next to the server you choose. And iTop VPN will open this tunnel for you,  encrypting your data, hiding your IP and DNS, relieving the ISP throttling. 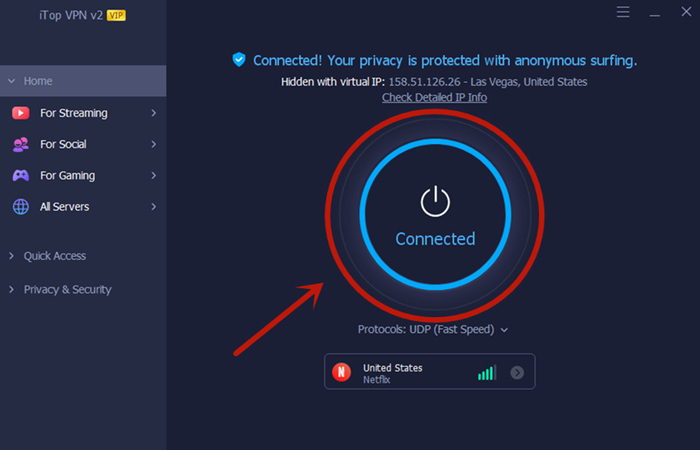 Well, after being informed of the best VPN Redditors suggested, you must have a basic impression of them. But how to select the best VPN according to your demands? Yes, you need more references. This part tells the most-cared-about features of a good VPN, summed from experience Redditors. All the perspectives are extracted from the replies under ‘r/VPN’ > best VPN > the most upvoted answers. Let’s see what did they mention.

How well can VPN safeguard the PC is always the most-cared-about point of all users. VPN companies propagate their product safe at a military level, government level, or bank level, and the truth is

The trial version is a good means to try a product without actually paying for it. But unfortunately, the most influential VPNs refuse to offer such service. If a VPN allows you to use its trial version or free version, it must have strong confidence and you can trust it to some degree.

Another method to protect your benefits. Companies’ promotions could mislead you to buy the wrong VPN, so a long-term money-back policy is crucial to customers.

PayPal is considered the most secure payment since it is super-efficient in refunding. VPN with PayPal will definitely be more reliable than those who don’t.

Neat interfaces and easy operations are weighed important as well. Choose those with no ads and misleading jump-outs.

The issue is you're always going to have slower speeds when connecting overseas, so you should aim at choosing the low-latency, low-ping, and quick server to carry your games or streaming platforms.

• Be alert to a free one

The last suggestion from Redditors is alert to a free one. The old saying goes like, you get what you pay for, and it still makes sense in 21 century.

Redditors have made it clear that Free VPN should never be trusted. And paid VPN will protect your benefits by offering frequent upgrades, a money-back policy, and 24/7 tech support.

Redditors believe that free VPNs are not trustworthy, and the services you receive will definitely be in accordance with the money you paid. iTop VPN is a safe VPN as well though it is a free VPN no registration.

3. Does VPN read your traces and log your data?

The answer is Yes. No matter how your VPN provider claims to adopt the no-log policy, they would always take over your data. The leakage of private information is extremely harmful, but with a reliable VPN, no such thing will happen in the first place. The VPN listed in this article is all safe to use, please count on them and let them dispel your puzzles.

This best VPN Reddit list gives an all-around analysis of the welcomed VPNs in Redditors’ eyes. Finish reading and you will figure out why do people recommend the 6 VPNs mentioned in this passage. Please choose the most suitable one according to your concrete demands.