Introduce the best free VPN for both Windows 7 & Windows 10. A detailed comparison for both of them. The ProtonVPN, Hotspot, and the iTop VPN for windows.

Here a VPN with a software client instead of a VPN that needs you to set up manually would be recommended for better compatibility and easier use. Here are the 3 best free VPN for Windows 10 and Windows 7 for free, working on both operating systems properly and managed by an Application：Hotspot Shiled, Proton VPN & iTop VPN for windows.

The bandwidth occupation of Hotspot Shield is OK, according to the test, the general occupation is 45% but the latency is just intolerable. You can visit websites through their proxy, and online games are properly on the list. But it will be difficult to watch movies with Hotspot Shield basic.

The ProtonVPN is might be one of the best VPN for Windows 10 free that customers talked much about. It is good to see that three free proxies are offered by Proton VPN free, the US, Japan proxy & Netherlands instead of one single free line. And the ProtonVPN is not hard to use, again, run the application, click “Quick Connect” then you are able to connect to their server without any manual setting. The UI design of ProtonVPN is kinda confusing & abstract, it causing troubles sometimes when using ProtonVPN.

It sounds tempting when someone tells you to have a free-to-use & unlimited traffic VPN to use. But we still need to look at the problems this top free VPN for Windows has: Though ProtonVPN does not limit your traffic (like Hotspot VPN’s 500 Megabyte cap) but it eventually limits your bandwidth. Their official claim says” All ProtonVPN users, even those on our Free plan, have unlimited bandwidth and data.” But in a real case scenario, a number of factors could impact the speed of your VPN. due to the significant load & occupation of the ProtonVPN free server, which could seriously influence the user experience. According to the test, the uploading & downloading speed will not exceed 200 Kbps and is extremely unstable. The dropping is occasionally happening. You can’t count on ProtonVPN for any online activity other than viewing the webpage. The online game and streaming will not be covered by ProtonVPN. (Click to see how to see the best premium porn sites with a Top VPN) 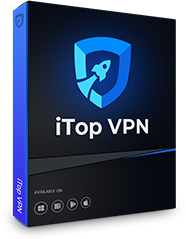 You can see your IP address instantly covered & your security tunnel will establish once you connected to iTop VPN for Windows. install & run. The free Version of iTop VPN offers Japan, Australia, Germany, France, UK and U.S. located proxy. iTop VPN offers 700 Megabytes of data traffic per day. (It resets every day). There is a 200 Megabytes surplus compare to Hotspot Shield basic service. That would be sufficient for internet surfing & purchasing through various coupon sites, but 700 megabytes is still short for watching online video. So upgrading to a VIP version is advisable. But have no hesitation to download iTop VPN for PC free!