Why Is My VPN Not Connecting and How to Fix it?

Think about you are fully occupied in watching the Olympics live stream free from abroad or transferring urgent files from a public spot using VPN software, and all of a sudden, the VPN stops working. It's definitely one of the most infuriating situations for VPN laymen as it usually won't get fixed with a simple reconnection and you have no clue about the reasons. You'll be like, "Oops...why is my VPN not connecting anymore?" 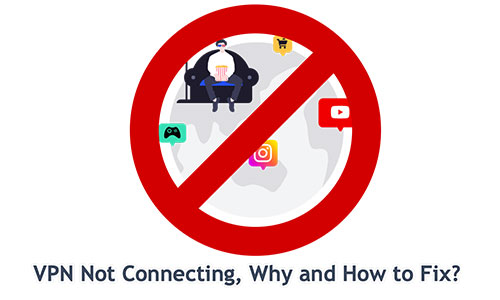 This post helps you figure out why is your VPN is not working and how to fix it to resume your enjoyment and tasks. Continue reading to check if you have missed anything points and see other common questions when using a VPN app.

Contents
Why Is My VPN Not Connecting and How to Fix It?

The Best Free VPN to Avoid VPN Not Working [Fast and Stable]
How to Fast Connect to Netflix Using iTop VPN?

Why Is My VPN Not Connecting and How to Fix It?

Actually, a lot of people are asking 'why my VPN is not connecting' in all kinds of forums for help. As several factors could contribute to the issue of VPN not connecting, this part will name some common causes and propose some useful solutions respectively.

Abnormal VPN Internet Connection: One of the most common reasons why is my VPN not working is that the VPN internet connection fails. You can check if the Wi-Fi network or other is working and try to reconnect, and afterward, see if the Routing and Remote Access Services are running in your VPN tool. If it's accepted by the VPN server, try to update your browser and applications requiring VPN connection because some VPN suppliers only endorse some specific program versions. Restarting devices or using another device to connect is also suggested as the reason why your VPN is not connecting might be hardware-related.

Incorrect Login Credentials: Have you checked if your credentials are valid when VPN stops working? Probably, you forget to renew your VPN membership or the service provider changes the game rules. Thus, check if your membership has expired and needs to be renewed. If not, go to assure pricing and software update on the VPN official website, particularly for free VPN services, in case you need to reset your account or upgrade the VPN software.

Overload VPN Server Connection: Sometimes, the issue of why is my VPN not connecting results from overloaded VPN servers. VPN technicians often set up a rejection process in the condition that servers are overloaded for better infrastructure. In this circumstance, simply disconnect and reconnect to the target VPN after minutes.

Traffic-blocked Connection Port for VPN: Occasionally, the question that why my VPN is not connecting could be answered by blocked ports. The VPN supplier can decide which port, a virtual point where network connections start and end, is open for VPN access. So, ask for tech support if this is too complicated for you.

Blocked VPN Services in Firewall: Also, you need to grant VPN permissions in the firewall of your device in case it's get blocked by the firewall.

Inappropriate VPN Protocol: Most of the time, VPN suppliers allow different tunnels and IP protocols. So trying to switch protocol is a better idea than futilely wondering 'why is my VPN not connecting'. Just configure it in your VPN program.

In addition to asking why is my VPN not connecting, you may have many other issues related to the VPN connection. Here are some common ones.

Q1: Why Is My VPN Connection So Slow?

A: The reasons why your VPN connection is slow include overloaded servers, far physical distance to the server, inappropriate protocols, antivirus and firewall blocking on your device, etc.

Q2: Why Is My VPN Not Working on Netflix, BBC iPlayer, Hulu, etc?

A: Factors that explain why is my VPN not working on Netflix, BBC iPlayer, and Hulu mainly cover two sides. One is because the VPN IP is blocked by Netflix or other platforms, and the other is because your VPN provider doesn't work with Netflix and other third-party applications at all.

Q3: Why Is My VPN Not Connecting on My iPhone?

Q4: Why Is My VPN Not Changing My Location?

A: Your VPN does not hide your location for various reasons. For instance, your browser and website cookies will track your real geolocation, especially you have previously allowed it, let alone some low-quality VPN app that could leak your privacy.

As you can see, most reasons why your VPN is not connecting are associated with the VPN tool you are using, pointing out the importance of a reliable VPN provider. To solve the VPN not connecting issue, the most efficient and easiest way is to replace the troublemaker with a better VPN service program - iTop VPN.

How to Fast Connect to Netflix Using iTop VPN?

Step 1. Download iTop VPN on your devices, which is the best free VPN for Windows, Android, and iOS operating systems, and support for macOS is on the way.

Step 2. Lunch this software for several VPN services, including VPN for streaming, social, and gaming, in which find and click the exclusive option for streaming. 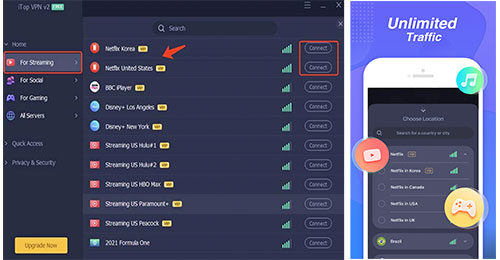 Step 3: Choose a location where you want to access Netflix, such as the United States, Korea, UK, and Canada. You can also choose "All Servers" on the left panel to access the Netflix connection. 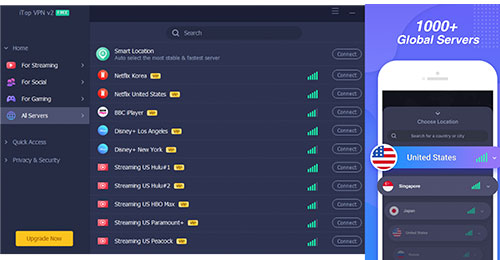 Step 4: Click on "Connect" to enjoy your movies and dramas abroad. 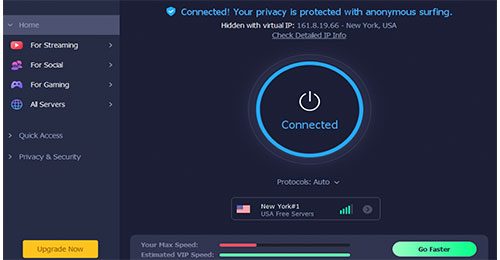 iTop VPN completely understands how awful it is when things get suspended by a suddenly disconnected VPN, especially when you work from home or abroad in the COVID-19 pandemic.

It is dedicated to providing first-tier VPN services. Technicians at iTop spend a lot of time protecting user privacy and ensuring stable connections wherever you are. Such a safe, private, flexible, and stable VPN tool also provides 24/7 technical support that answers any questions about VPN connection problems like why is my VPN not connecting.

You don't have to learn complicated technical basis like TCP/IP, DNS, and protocols when your VPN is not working, free VPN in particular. The best and quickest answer to "why is my VPN not connecting and how should I fix it?" is to replace it. The most recommended VPN replacement is iTop VPN as it prevents various connection problems and offers quick and stable access to Netflix, Hulu, and other streaming platforms.

All you need to do is to download this free VPN software, relieving yourself from this tricky question and never worrying about it again.