A VPN is the safest way to hide your identity on the Internet, protecting it with maximum security, and at the same time, hiding you from governments, ISPs, and hackers. A secure VPN also helps you unblock content, gaming, and other stuff without any effort.

Even though, there are some technologies used to block VPN for such reasons as policy, copyrithts, and legal issues. Don’t worry. The article recommends one VPN that can bypass VPN blockers and allow you to block IP and ads. 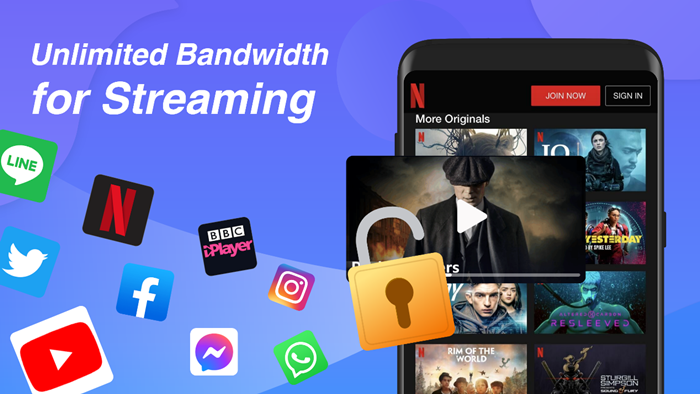 There are two different definitions of VPN blockers.

Now it’s time to talk about the fastest and most secure VPN, iTop VPN, which is one perfect example of a qualified VPN with an ad blocker to protect you from data leakage while surfing on the Internet.

The VPN provides four different Network Protocols, including Auto, HTTPS, UDP, and TCP, to ensure smart, stable, and fast gaming and streaming. You can download and use the iTop VPN blocker on Windows, Mac, Android, and iPhone.

Sometimes, your VPN get blocked is due to software issue. Like the administrator limts your proxy,  your VPN can't access the network setting in normal way - In this case, to use a compact private VPN broswer could possibly resolve this problem.

The Blocking Features of A Free VPN - Ads Blocker/IP Blocker

iTop VPN comes with powerful blocking & security features that guard your privacy and help you explore the Internet to your heart’s content.

Kill switch, network solution, and military-grade protection because of the powerful DNS. Now let’s discuss how you can use this free VPN’s ad blocker and IP blocker service.

The ad blocker VPN protects you from malicious advertisements that appear on your screen when you try to access a website. You can follow the steps given below to use iTop VPN ad blocker to avoid the ads.

Step 1: Firstly, you will download the iTop VPN for your device and make an account and login with your credentials.

Step 2: After that, you will select the server and set the Network protocol to auto for fast Internet surfing.

Step 3: There is an auto Ads blocker feature that turns on when you connect to iTop VPN so enjoy your ad s free surfing. You can go in the tools section to manually turn it on as well. 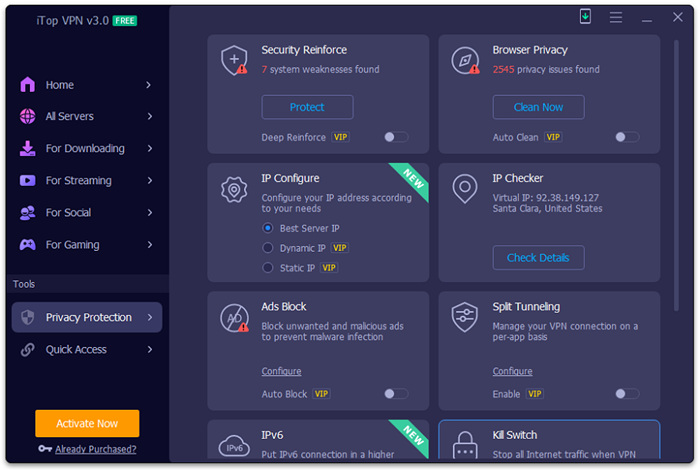 Now let’s talk about how to use the IP changer in iTop VPN for anonymous and safe web surfing with iTop VPN.

Step 1: First, you will have to sign in to your iTop VPN, and then you will go to the privacy protection section in the tools’ sections.

Step 2: Next, you will configure your IP address and check IP details with the given tools. You will find other useful options like split tunneling and kill switch.

Step 3: Lastly, you will select the server and freely use iTop VPN to stream content and do gaming. 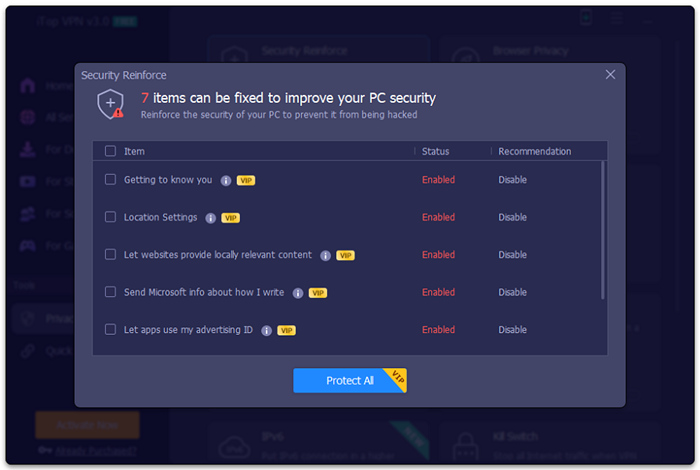 Many countries have certain copyright issues or other restrictions and limitations that make them ban or limit web content for their people. Sometimes the content is not appropriate, and people want to access it. An example of that is Netflix, which is still not fully accessible in some countries.

So, you can download iTop VPN to avoid Geo limitations, bypass school restrictions, overcome copyright issues, and replace your IP address with the server you connect to get free access to worldwide content. Learn more information about this Best VPN for PC.

Now let's talk about how you can use iTop VPN, the free unlimited VPN for Windows, to stream unlimited movies and series even if you are in a country with banned access to Netflix.

Step 1: The first step is downloading the iTop VPN and signing up. After signing up, you need to sign in with the right credentials.

Step 2: After signing in, you need to turn on the main interface and select the country server you want to connect to for streaming their Netflix library.

Step 3: The last step is to limit the apps by only allowing a few to use VPN and enjoy streaming.

VPN blockers are legal in almost all the countries except a few, but that list is very short. The main purpose of using VPN is to maintain the secrecy and privacy of a user on the web, so there is no point in banning VPN as it fails the entire purpose of their creation.

Two major countries that have declared VPNs illegal are Russia and China; however, other big countries, including the United States, have legalized VPN use. Private browsing and safe use of the internet without showing your identity is legal, and so is the use of VPN.

2. My VPN Is Blocked by Firewall, How to Bypass that?

Due to certain policies and copyright issues, the government of a country might block a VPN; however, if it happens with you, it is always workable to try a new VPN to bypass that. Sometimes the website owner or your ISP can also use filtering measures or firewalls to block your VPN.

The purpose of firewalls is to create a barrier between your internal network and outside do limit the access of websites that are inappropriate or illegal to use. You can use VPNs like iTop VPN which is one of the best VPN blockers and has the easiest interface to avoid any unlikely event.

3. In how many ways can a VPN be blocked? How to avoid VPN blocks?

There are three types of VPN blocks including deep packet inspection, IP blocking, and Port blocking. In port blocking the one trying to block your VPN will use VPN protocols and block your connection ports.

Similarly, deep packet inspection by ISP's can block your VPN by beating its encryption easily. IP blocking is the most used and easiest method of blocking a VPN by blacklisting IP addresses using a VPN. However, you can avoid your VPN from being blocked by various websites if you try switching ports or ports forwarding.

Another way to avoid VPN detection is by using secure protocols. The last method that we are going to talk about is switching your servers so that no one can detect your VPN and block it. You can use mobile data and see if it works.

A VPN can provide you with a secure Internet connection while maintaining your privacy and allowing you to access websites and content from around the world. You can download iTop VPN for that purpose because it provides you with military-grade protection and doesn't let anyone detect it.

You do not have to worry about a malicious bug or privacy protection with the VPN. It is a free website unblocker as well as one of the top VPN blockers that you can use for online gaming and streaming shows without facing any restrictions.