PPTP VPN Mac Setup - How to Connect to PPTP VPN on macOS El Capitan, Sierra, and Above

How to configure PPTP VPN for Mac? The article gives thorough guides on Mac PPTP VPN setup and connections on macOS El Capitan, Sierra and above.

Abbreviated for Point-to-Point Tunneling Protocol, PPTP is invented by Microsoft's Gurdeep Singh-Pall in 1999. It is one of the oldest methods to implement a virtual private network (VPN) and achieve secure data transmission between free VPN clients and VPN servers. 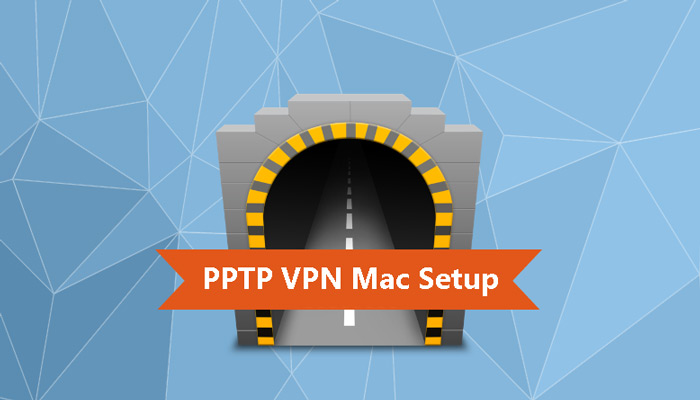 PPTP has enjoyed great popularity among Mac users for its simplicity and lightning speed. It can noticeably increase VPN speed and require no additional device like a rooter. Unfortunately, Apple has removed PPTP support on macOS Sierra (10.12) and the above versions for security concerns. What is worse, the PPTP.ppp kernel extension plugin was removed from the network configuration system thoroughly after macOS 10.15 (Catalina) version, making PPTP VPN connections impossible.

But if you still want to set up PPTP VPN Mac, this article will show how to easily configure PPTP VPN on macOS El Capitan, Sierra, and above in detail.

PPTP VPN Setup with Command Line for macOS Sierra (10.12) and Above

People using Mac with the recent versions seemingly loss the chance to connect to PPTP VPN on Mac for the official removal of support by Apple from macOS Sierra and higher. But in fact, you can still connect to PPTP VPN on Mac via terminal command line because you can invoke the available PPTP libraries. Otherwise, you can try another VPN for Mac provider as a PPTP alternative for security or restriction unblocking. Now, let’s follow the guides to connect to VPN on macOS Sierra (10.12) and above with Command Line.

Step 2. Copy, paste, and fill the configuration of the pppd daemon. Below is a sample script. 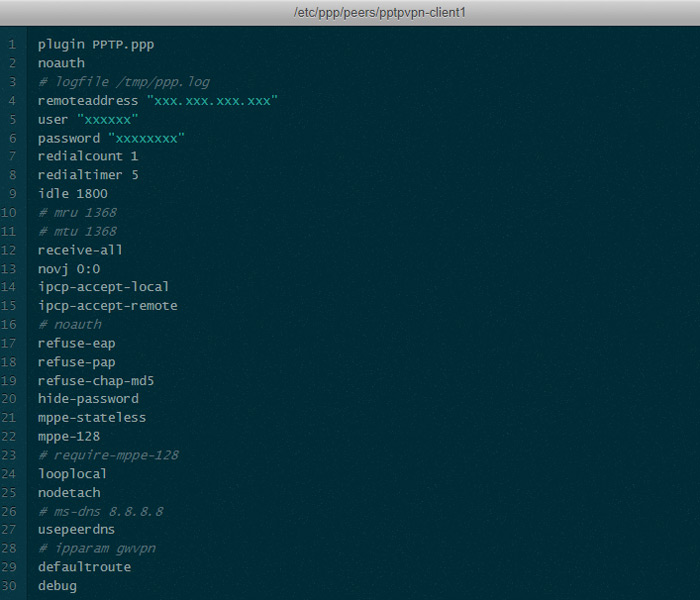 In short, all you need to do is to write a configuration code containing PPTP configuration and call it with the command line via terminal.

Free PPTP VPN Alternative for macOS Sierra (10.12) and Above

VPN connections using PPTP are generally considered insecure. Hence, people can choose an alternative to the Mac PPTP VPN with other protocols. iTop VPN comes as one of the top options. In comparison with PPTP VPN Mac, iTop VPN features higher security and wider compatibility with the support for macOS 10.15 or later.

iTop VPN utilizes best-in-class scheme to encrypt your data to defense attacks and tracks when surfing online. Your privacy like username, password, ID, payment etc., will never be exposed. Kill Switch is the further protection feature that can automatically block the connection the moment VPN stops working. What’s more, it guarantees no log of your data.

It also works as a website URL unblocker allowing you to get access any restricted content online from anywhere. It can replace your IP address with a new one bypassing geo-blocking, government censorship or limitations at school, or workplace. Besides, you can unblock restricted apps and games without hassle. It drives you to enjoy a global network thanks to thousands of VPN servers in 100+ locations.

It builds a very stable connection that you will not experience sudden or unexpected disconnection as well as fast internet. No ISP throttling or other factors can limit the bandwidth using it.

It is much easier to use iTop VPN on Mac than PPTP VPN. Just 2 steps, you can enjoy all VPN features on your Mac.

Step 2. Click the Connect button on the center of the interface. It will automatically connect to the fastest servers for you.

Otherwise, you can select All Servers > pick one server > Connect. According to your needs, you can connect to a server for streaming, gaming, social. 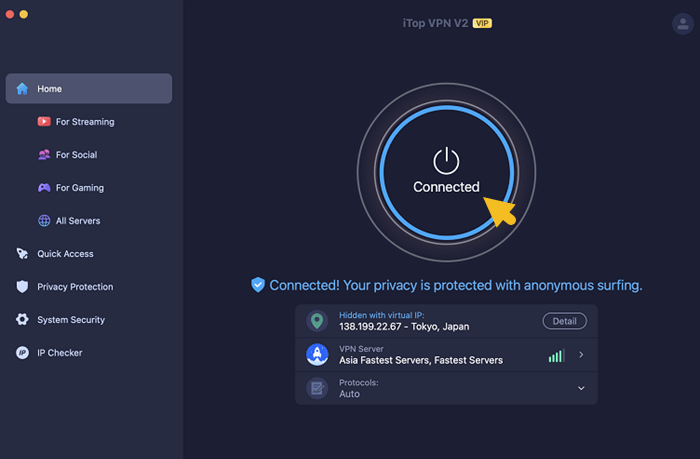 After Connect turns to be Connected, the VPN setup on Mac is finished.

iTop VPN is also the best free VPN for Windows and iOS. And, it enables you to connect to up to 5 devices simultaneously. So, you can choose to set up it on Mac or other devices as will.

It is relatively easy to set up a PPTP VPN on Mac with older OS X versions like Mac OS X 10.11 (El Capitan) and lower. People can connect PPTP VPN Mac free by the Network Interface. Here is a step-by-step tutorial on how to configure PPTP VPN on Mac.

Step 1. Hit the Apple icon in the menu bar and navigate to System Preferences > Network.

Step 2. Click on the Add button in the lower-left corner and select the VPN option from the pop-up menu. Next, choose PPTP as the VPN type, name the service, and click the Create button. 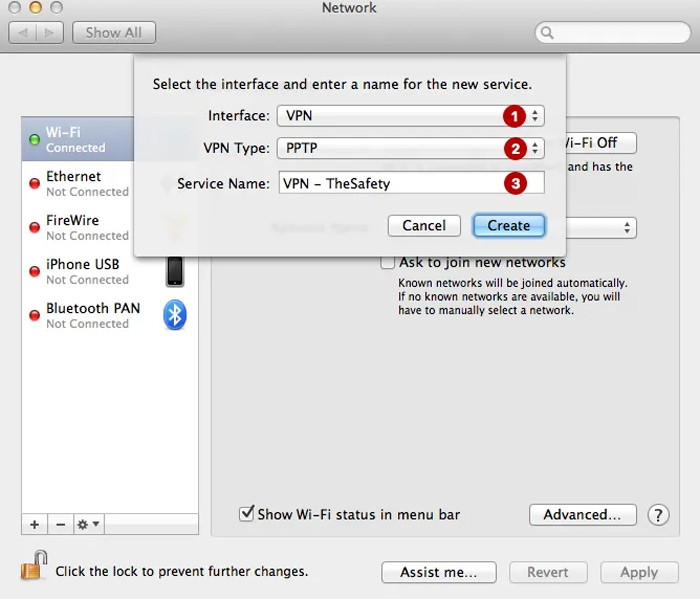 Step 4. Select the Maximum (128 bit only) option in the Encryption drop-down menu and click the Authentication Settings button. 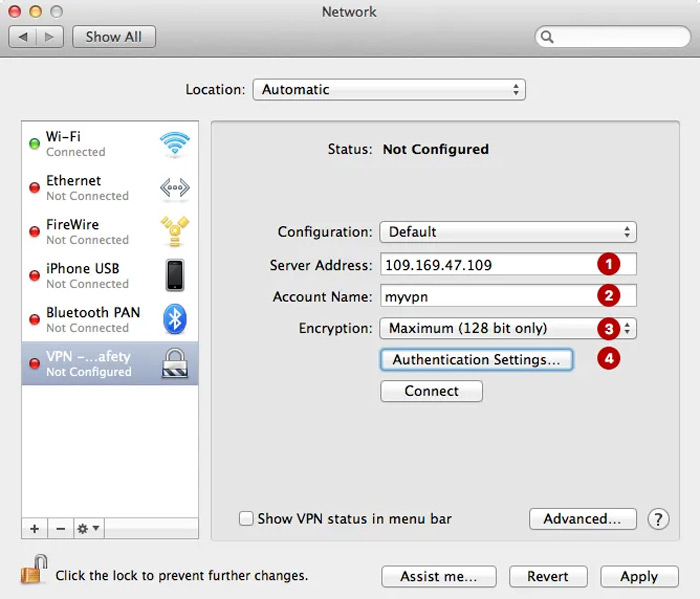 What Is PPTP VPN?

As mentioned in the introduction, PPTP is an old-fashioned VPN protocol that connects VPN users and VPN servers, making anonymous Internet surfing possible.

How Does PPTP VPN Work?

PPTP uses a TCP control channel to encapsulate point-to-point packets at a Generic Routing Encapsulation (GRE) tunnel. Thus, the packets put into an IP envelope are seen as IP packets when encountering a router or other device.

What're the Advantages and Disadvantages of PPTP VPN?

Low cost and fast speed are the most appealing advantages to PPTP VPN Mac users. However, the limitations of PPTP VPN Mac are apparent too. Security and reliability problems are highly controversial. People also face firewall restrictions in some circumstances.

Why Did Apple Remove the PPTP VPN Mac? 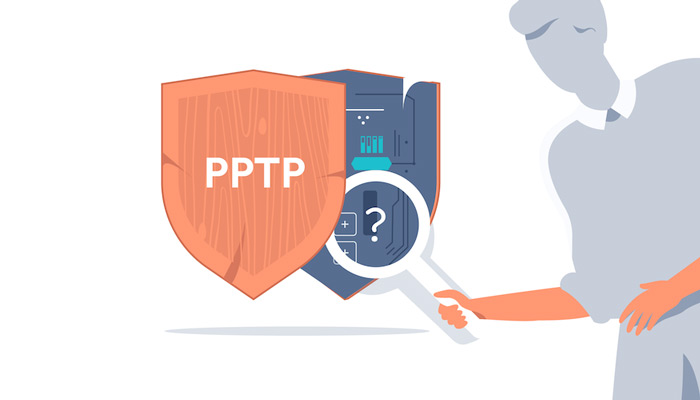 The removal of PPTP support from Apple has caused great inconvenience on the Mac PPTP VPN configuration. This article sheds some light and gives solutions to set up a PPTP VPN for Mac. For Mac OS X 10.11 (El Capitan) and below, people can establish a PPTP connection through the Network Interface. For Mac OS 10.12 (Sierra) and above, people can execute the command line to activate it from the terminal. However, due to the security concern of PPTP VPN on Mac, we prefer to recommend downloading the PPTP VPN Mac alternative – iTop VPN for a higher encryption level and safer Internet access.