[Hulu VPN] Work with No.1 VPN for Hulu No Ads

How to watch Hulu and Hulu + Live TV? Get the best free Hulu VPN to circumvent geo-restrictions and watch HD/4K Hulu TV shows, movies and originals.

Hulu, which is one of the hottest on-demand streaming services hosting wealthy contents from latest TV shows, blockbusters to originals, introduces a fresh digital way for users to entertain in daily life. However, not everyone is entitled to get access to this amazing service due to geo-restriction. Hulu officially gave an announcement that “A Hulu subscription is intended for use by members of single U.S. household” in 2019 to explain why Hulu can’t be used internationally.

How Does Hulu Work with Geo-blocking?

Why does Hulu only offer service in the United States? Copyright is the issue. It blocks the access in other countries to prevent from broadcasting of copyrighted TV shows, movies and originals. And, the error message saying “We’re sorry, currently our video library can only be streamed within the United States” pops up when you attempt to watch some contents on Hulu outside U.S.

Some people had used an anonymous proxy server to hide location information aiming to browse Hulu anonymously. But it went to a failure. Hulu deploys a solid firewall to detect ones who’re using anonymous proxy and restrict them from streaming videos with the message:

“Based on your IP address, we noticed you are trying to access Hulu through an anonymous proxy tool. Hulu is not currently available outside the US. If you’re in the US, you’ll need to disable your anonymizer to access videos on Hulu.”

Thus, in order to watch or stream Hulu successfully, you should work with a powerful enough Hulu VPN which can assign an accurate location of the United States.

There are a handful of VPN providers in the current market, so how do you know which one is the best for Hulu? Some key criteria of a workable VPN for Hulu should be satisfied.

As mentioned above, Hulu can detect anonymous proxy tools and block the user. If the so-call VPN Hulu is only able to hide your location information rather than connect the server in the United States, it will be easily discovered and banned. So, the best VPN for Hulu must build in a well-grounded system to circumvent geo-blocking and detection technology to make the stream a reality.

A stable connection plays an important role when you choose a Hulu VPN. As the online surfing experience says, it needs quite good network connectivity to watch or stream a TV episode or feature movie smoothly. A VPN for Hulu will be praised only when it delivers the most stable connection to get access to any Hulu content like the hot reality TV shows Love Island UK without interruptions, lags, or other watching issues.

No one is enough patient to do detailed research to learn how to use a VPN to watch Hulu. The tool has a straightforward interface and simple operation is much welcomed. The best VPN for Hulu not only shows off internal high-level technology but also features ease of use for beginners and an excellent user experience.

Free VPN vs paid VPN. You can choose a VPN that offers a free & paid version that can meet your basic needs and the cost is reasonable.

Well, on the basis of our evaluation with repeated test, iTop VPN is ranked No.1 Hulu VPN which perfectly meet all above criterions. This fast and safe VPN service gives you instant access to Hulu and other your favorite American streaming platforms. It hides your IP address and encrypts your network to protect you from hackers and any malicious attempts. Besides a VPN for Hulu or other streaming services, iTop VPN also gives you free access to music, social media, and gaming. It is the best free VPN for Windows, Android, and iOS, and macOS.

Learn detailed advantages of the free VPN for Hulu. 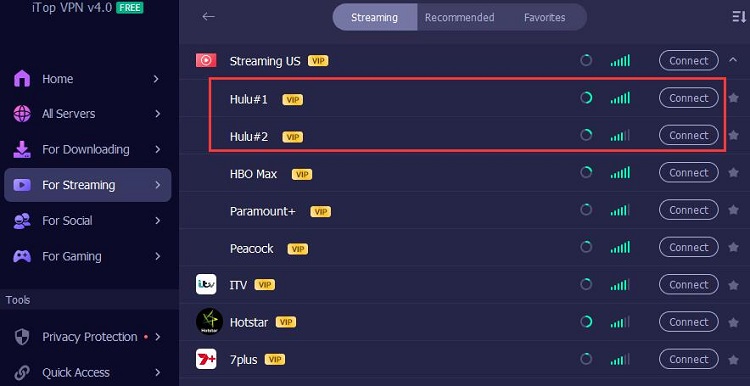 Fast & stable connection for Hulu. The average server speed of this tool is over 130 Mbps, which is far enough for any video streaming. The connection is very stable and won't be cut frequently because of the long distance from the server location.

Private & safe. iTop VPN is a safe VPN and guarantees they don't collect, save, or sell any user data. It employs military-grade encryption to hide your identity and activities while you are watching Hulu in any place in the world.

Ad-blocking feature. Malicious websites and advertisers are annoying, so the built-in ad-blocking feature of the free VPN for Hulu blocks ads in Hulu and allows you enjoy streaming without interruption.

How to Use Free VPN to Watch Live TV with Hulu

Hulu + Live TV, as it claims, is more than just Live TV streaming. it allows you to stream 75+ top live and on-demand TV channels, shows, news, and sports online. Exclusive series, hit or classic movies, current episodes, premium groundbreaking Hulu Originals, and more content along with entertainment on Disney+ and live sports on ESPN+. More than that, you could record live TV with unlimited DVR at no additional cost. You can watch Hulu on 2 screens at the same time. 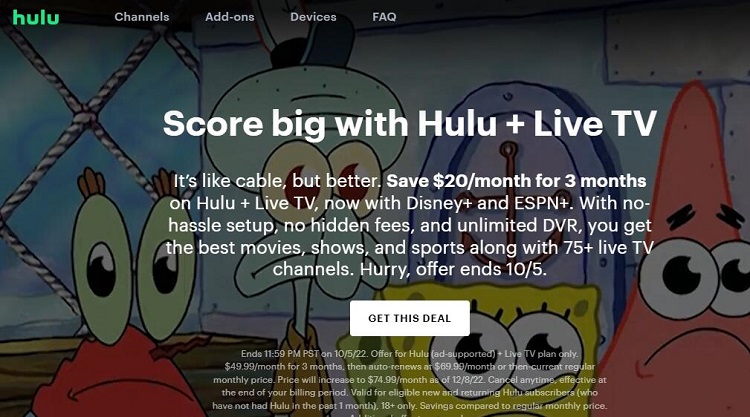 You can watch Hulu + Live TV online and on other devices like iOS, Android, Roku, Fire TV, LG, Xbox and more.

The more concerning thing is its price. You get the Hulu + Live TV with Disnety+ and EXPN+ at the cost of $49.99/mo for 3 months.

How to watch Hulu + Live TV?

Step 1: Download, launch and install iTop VPN on your device. Then connect to US servers to bypass geo-restriction from its free US servers or dedicated Hulu servers under the item of  "Streaming".

1. iTop VPN builds in a Quick Access module that you can connect VPN to watch Hulu in 1-click.
2. Besides serving as a Hulu VPN for streaming, iTop VPN is available for gaming (as a PUBG VPN), browsing, socializing and so on.

Hulu geo-blocking is not a giant obstacle to prevent you from watching and streaming outside U.S. iTop VPN, the free Hulu VPN, figures out the most straightforward method to break the restriction by connecting to a United States IP instead of your original IP address so that you can easily get access to Hulu in any region. Moreover, a stable connection and fast network speed empower you to watch or stream any HD or 4K movies, and TV shows on Hulu without interruptions and lags.