How to Share VPN Over Hotspot on iPhone | Proven Methods

How to share VPN connection via hotspot on iPhone? Let’s get stuck into the easy VPN hotspot iPhone setup and surf online with VPNs across any device.

A hotspot on mobile phones offers a wireless access point that allows users to connect devices to the Internet on the move. When you enable the hotspot feature on your iPhone, any device connecting to the hotspot should share the same Internet connection. However, many people frustratingly find that they can't manage to share VPN hotspots on iPhone by following the same steps. How to share VPN hotspot on iPhone? 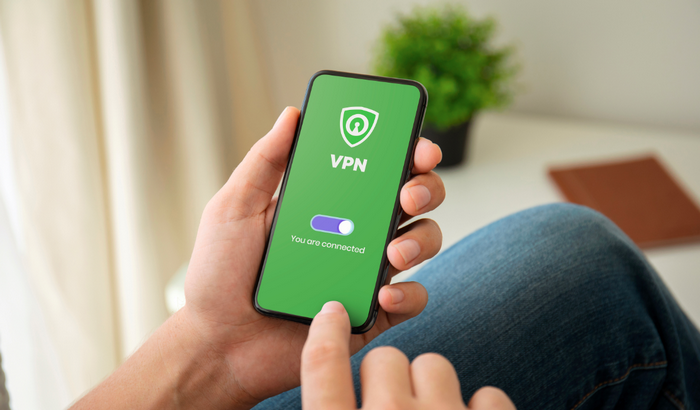 Luckily, there is a way out. In this post, you will get the right way to share VPN connection via hotspot on your iPhone and have the same VPN connection on your multiple devices. The best part is that the VPN hotspot iPhone setup guide doesn’t require you to configure your Wi-Fi settings like a pro.

Have not yet got a VPN server on your iPhone? You need to set up one first. Before showing how to share VPN connection via hotspot iPhone, here is a nice VPN for you.

iTop VPN is a good VPN for iOS and supports Mac, Windows. It serves as a smart VPN client with ready VPN servers. You can choose the desired connection to browse, download, and stream online fast and safely. The better part is it supports multiple devices at once.

To have a VPN connection on iPhone and other devices, you only need to install the lightweight app on these devices and connect to the VPN server. iTop VPN supports free servers without sign-up, which makes it simple to use VPNs on more devices besides iPhone.

Features on iTop VPN for iOS

iTop VPN covers many good features. Here are more you can benefit from with iTop VPN on iOS.

Fast Connection: It is a fast VPN for iPhone. You can enjoy incredible speed once you connect to a chosen server. There is no limitation as you stream, download, and search.

Military Grade Encryption: You don’t need to worry about the prying eye of the attackers. Your information has end-to-end encryption with this safe VPN.

Easy Setup and Use: You only need to download and install the iTop VPN app. After that, connect, choose a server and you are all set.

No Logs Policy: The VPN never stores your information on any servers. After adding the VPN to your iPhone, you can browse among any activities without being seen.

Multiple Device Protection: iTop VPN supports up to 5 concurrent connections with one account. In other words, you can use it on more devices and enjoy watertight protection when surfing online.

How to Quickly Set Up a VPN on iPhone

Step 1: Download iTop VPN by tapping the button below. Install and launch to proceed.

Step 2: There will be a button on the screen saying ‘Connect’ after the login. Tap on it to get connected. 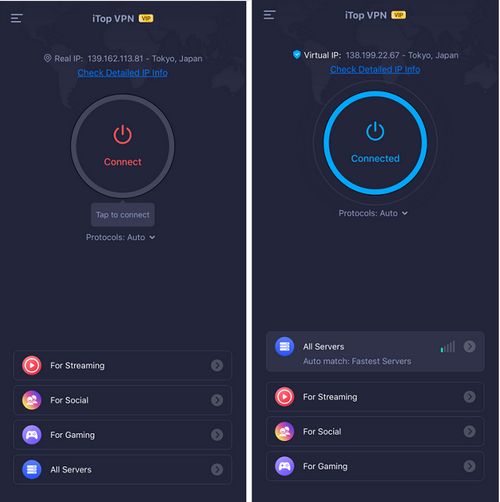 Step 3: There are VPNs for P2P, streaming, gaming, and more. Choose your favorite server from the list and enjoy downloading, browsing, streaming, and playing games. You can also select Network modes, among other settings. Once you have iTop VPN installed and enabled, you can now share VPN hotspot iPhone easily to other devices. How to share VPN connection via hotspot on iPhone? Here are the steps you need to apply. 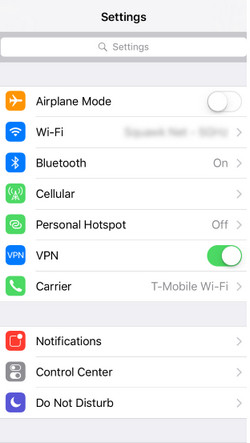 Step 1: Go to the phone settings by clicking on the ‘Settings’ icon.

Step 2: Tap on ‘General’. The network will appear.

Step 4: Tap on ‘Add VPN Connection’ to add the iTop VPN if it’s not there. Otherwise, click on it.

Step 5: Turn on Hotspot sharing on the iPhone after selecting the VPN. Copy the network name and password.

Step 6: Connect other devices to the hotspot. They will all be safe under the server you choose on the iPhone sharing the VPN connection.

It should not involve a complicated process if you want to solve how to share VPN hotspot on iPhone. In practice, however, some people have complained that they failed to share a hotspot VPN on iPhone with the approach above. They have found that the IP was assigned by the mobile carrier instead of the VPN server after they connected to the hotspot.

If you happen to run into this case, the only way to set up VPN hotspot is to jailbreak your device, though it is not an advisable move since it requires high technical skills. Another disadvantage is that if the iPhone has a warranty, it will become void after jailbreaking.

Is there a way out? Yes, you can connect to the hotspot on the iPhone and download iTop VPN from App Store to use VPNs on the other device. As mentioned before, iTop VPN supports multiple connections at the same time. You can use it on maximum of 5 devices with an account, and iTop VPN is available on PC and mobile devices. Better still, iTop VPN comes with a version of free VPN. Even if you’re an unsubscribed user, you can take advantage of its free trial VPN for iPhone, Android, Windows, and macOS at perineum quality to surf online.

Also Read: How to Use VPN on iPhone >>

You now know how to share VPN hotspot iPhone and the workaround if the iPhone style does not work. When adopting the regular method of setting up VPN hotspot iPhone, you can use iTop VPN as an alternative solution. iTop VPN can save you cost and time to achieve the same purpose. Please download iTop VPN and give it a try!