Free Download a Stealth VPN: Hide Your Track on the Internet

This article gives you a thorough guide on finding a suitable Stealth VPN and hiding your track on the Internet.

One valuable thing about internet usage is privacy and anonymity. With the Internet opening a platform to conduct various transactions, people are increasingly worried about cyber watchdogs. When surfing, you don’t want to get tracked by authorities, third parties, websites, or hackers. Fortunately, VPN services are a click away, and you can always pull a trigger and use one. However, the growing usage of VPN has forced cybersecurity experts to unlock and detect data sent from VPNs. Therefore, normal VPNs are no longer safe.

Normal VPNs offer porous privacy and online anonymity, so people rush to VPN stealth. It is crystal clear that stealth VPN offers unmatchable surfing anonymity, and it is a modern way to use VPN. If you are looking for VPN stealth, then worry no more. This article takes you through a thorough guide on everything you need to know about VPN stealth.

Contents
What is Stealth VPN?
Surf the Internet No Track with a Stealth VPN
FAQs on Using a VPN Stealthy

What is Stealth VPN?

A stealth VPN is a VPN service that hides your VPN traffic and makes it appear like normal HTTPS traffic. It leverages state-of-the-art protocols and encryption technologies to make it extremely difficult for websites and network administrators to detect that you are using a VPN for Windows. Stealth VPN often bypasses Deep Packet Inspection, and hence users can seamlessly overcome firewall and network restrictions.

With the extensive usage of VPNs across the globe, cyber security brains have devised ways to detect data sent from a VPN network. VPNs without stealth utilize the OpenVPN protocol to send data packages. This makes them vulnerable because network administrators and ISPs can easily deduce data packets using this protocol. Therefore, a rigorous inspection routine detects your VPN usage.

On the other hand, a stealth VPN service leverages top-grade protocol and a network of obfuscation servers to alter the pattern of data low from your VPN. This way, your VPN data pattern appears like the normal data from a regular network. As a result, stealth VPN can go past online censorship or internet access restrictions like the Great Firewall in China.

Surf the Internet No Track with a Stealth VPN

This VPN stealth service is designed to transform users’ privacy and security while surfing. It has every single feature you would demand from Stealth VPN. Its ability to bypass geo-restrictions and government censorships makes it a number one choice for droves of people. With iTop VPN, you never have to worry about being tracked when accessing banned sites, apps, and online services in your location. Just install and leave the rest for iTop VPN.

Steps to Use this Stealth VPN

The following are steps on how to use iTop VPN stealthily to start the VPN for Windows free trial.

Step 1. To begin with, navigate to the iTop Stealth VPN download page and fetch this stealth VPN free service to your computer. Once downloaded, install the VPN and launch it to access the main interface.

Step 2. Now, sign in to iTop VPN, then choose desired servers. Besides streaming, gaming, and social servers, you can click “All Servers” to access several other servers. 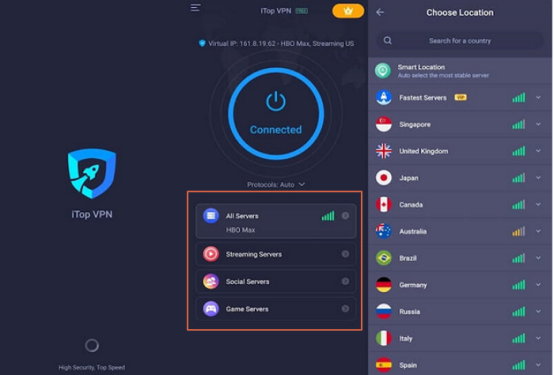 Step 3. After choosing desired servers, hit the “Connect” button and wait until it changes to “Connected.” You are now connected to that target sever via iTop VPN stealth. 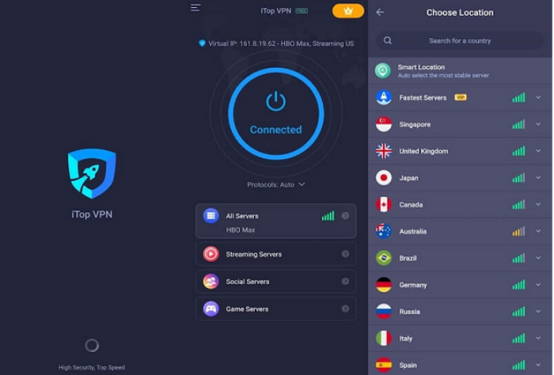 FAQs on Using a VPN Stealthy

Q1: Can iTop VPN Really Hide Your Track on Internet?

The simple answer is a yes. iTop VPN, the most secure VPN, offers military-grade protection, and therefore all your private information, including location and track of activities, are hidden.

iTop VPN is a powerful free VPN service. It is 100% free and does not sell your data to other third parties.

Unlike several free VPNs, iTop does not result in a noticeable speed drop. It covers a network of servers across the globe at fast speeds. So if you are streaming or playing games, then iTop VPN is good for you.

iTop VPN is a stealth VPN and seamlessly bypasses government restrictions and censorship. It goes past restrictions in countries like China, Cuba, UAE, Iraq, and Pakistan.

iTop VPN supports up to 5 devices at the same time. Therefore, you can share your iTop stealth VPN with up to 5 people.

According to this article, you can easily see that a stealth VPN is a must-have if you need privacy and security when surfing. Again, not every VPN out there is right for you. Fortunately, this article has shown you what the right Stealth VPN is and also the VPN for Plex. Yes, iTop VPN it is. With that in mind, proceed to download the best VPN stealth and take your surfing privacy to another level.