BBC iPlayer content is only available in the United Kingdom. Following tips will introduce a free VPN service to unlock BBC iPlayer everywhere in the world.

The British Broadcasting Corporation (BBC) might be the most well-known international media giant which reputation was build by word of mouth. Over their one hundred years of history, not satisfied with their traditional broadcaster business, the BBC iPlayer is a daring move for BBC to open up their business in the online streaming market. 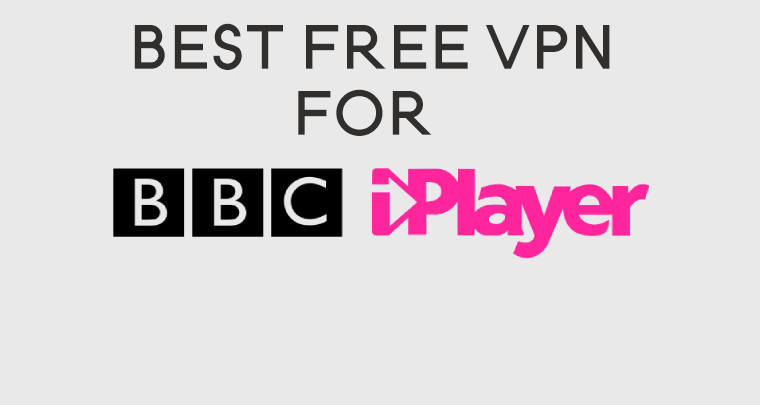 Benefit from the iconic craftsmanship attitude towards their works, there are many fantastic shows on the BBC iPlayer platform exclusively. Like The Nest, London Kills Shrill…etc. You don’t really want to miss them whether you live in the UK or not, they are literarily too good to give them up.

One of the biggest problems for BBC iPlayer is, their service is only available in the UK. This means if you are not a UK resident, or you go abroad & want to watch BBC iPlayer shows out the border of United Kingdom. The most possible result would be these error messages showing off:

“BBC iPlayer only works in the UK. Sorry, it’s due to rights issues”
“This content is not available in your location”
“This content doesn’t seem to be working”.

The reason for this error information showing is because BBC has detected your location through your IP address – only British IP could be allowed exclusively. The further thing that annoys me is that the BBC iPlayer has particularly strict VPN-detection features, meaning most VPNs can’t unblock BBC iPlayer abroad. Thus, we got to find a VPN that can bypass the BBC iPlayer region check, a real VPN for BBC iPlayer.

As a result, it can be a difficult thing to unblock BBC iPlayer with a common VPN service.

If you are using a VPN but failed to access the BBC iPlayer service, the listed conditions above could be very likely to be the reason why you can not access their service. Before introducing a real working free VPN for BBC iPlayer, you might try to fix manually:

If none of these methods fixes your access to BBC iPlayer, it’s very likely your VPN doesn’t work with BBC iPlayer at all. Here I would recommend using a real free BBC iPlayer VPN – the iTop VPN.

As stated before, not all VPN services support watch BBC iPlayer streaming. Due to strict control of the foreign connection, access to BBC iPlayer aboard the UK isn’t that easy. Is there a free VPN for BBC iPlayer can penetrate their defense and offer a better overseas watching experience without buffering? The iTop VPN could be a perfect problem solver for you. 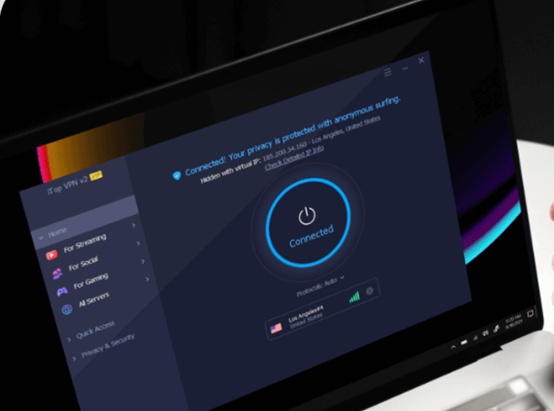 iTop VPN provides a dedicated tunnel for BBC iPlayer users. Their physical server room is located in London to make sure that your outgoing IP address will be marked as “Local” for BBC iPlayer. It also eliminates the possibility of virtual server adaption. The iTop VPN team is focusing on every update and the support team will crack/ fix any possible issue that comes with any software/network changes released by the BBC.

One thing I need to mention is that the iTop VPN is free to trial & free-to-use. You might need to upgrade to a premium account to unlock the BBC iPlayer acceleration. But you can have a free chance to access the majority of features of the VPN. Compare to general VPN service providers in the market like ExpressVPN, NordVPN, which ask your credit card information for their “30-days money-back guarantee” and bill your service immediately after the free trial, The iTop VPN insists to be a real free-to-use VPN. No credit card, no social network account affiliation, no PayPal. There are 700 megabytes of free traffic open for free use & the traffic cap will reset every day. You may decide if to upgrade to enjoy premium service (including to unlock the BBC iPlayer) after trial. 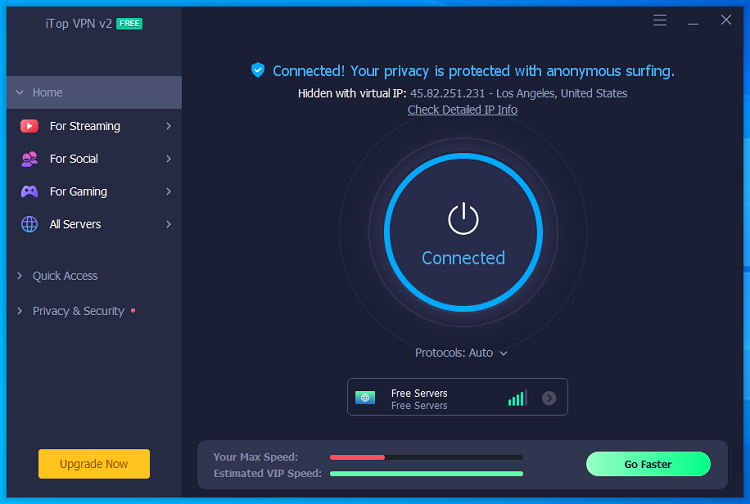 How to Use iTop VPN to Unlock BBC iPlayer Region Restriction

That would be quite easy to use iTop VPN to remove BBC iPlayer’s regional restriction. Download the iTop VPN from their official page, install the software. Then run the software. 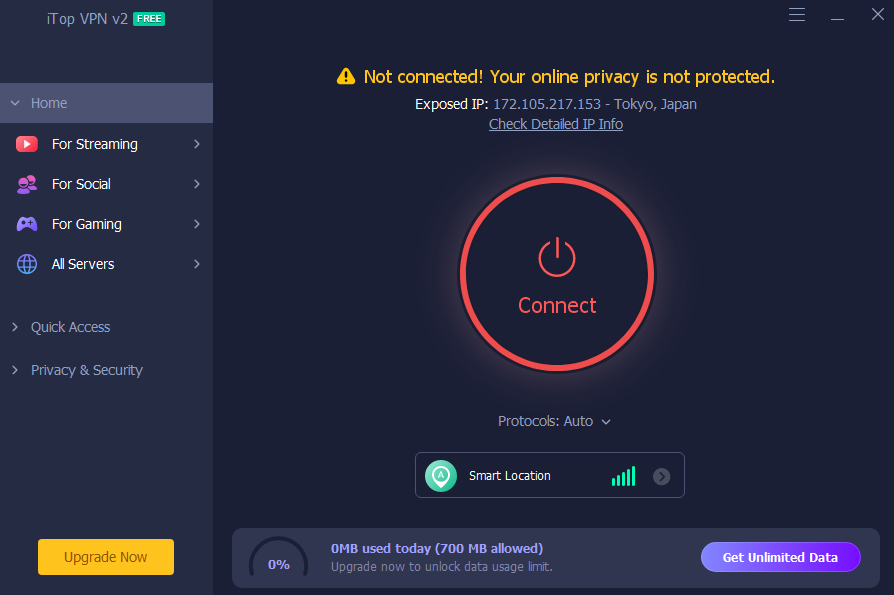 You will see the main interface, find the “For Streaming” tab in the left hand, you will find “BBC iPlayer” (VIP account required), click the button “Connect”, then the iTop VPN will connect you to BBC iPlayer automatically. 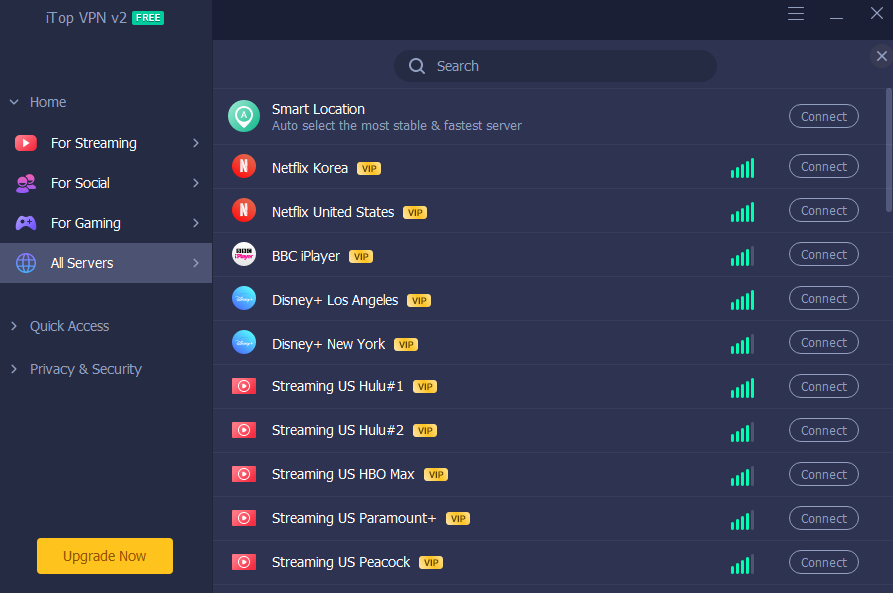 You will see the iTop VPN does not only support BBC iPlayer but other streaming platforms acceleration options are offered: Netflix, Disney+, Hulu, HBO, Paramount… if you are seeking the best BBC iPlayer VPN for streaming purposes, the iTop might cover your other need for watching online content.