Check this page for 5 VPN for HBO Max that help you access this streaming platform outside the US and use the best HBO Max VPN to fix the error: HBO Max is not available in your region.

HBO Max, a subscription video-on-demand streaming platform, is home to bundles of TV favorites, blockbuster movies, and original shows, including series, documentaries, specials, and cartoons. However, it's only reachable in a few counties, meaning you can't connect to HBO Max unless you live in one of them. A simple solution to this problem is to use an HBO Max VPN, which helps you bypass the geo-restrictions and access HBO Max easily with an American IP address though you are outside the US. 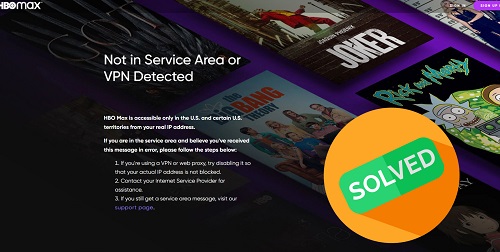 But it leads to another problem, i.e., how to find the best VPN for HBO Max? Some named HBO Max VPN on Reddit have been blocked by the HBO Max and VPN services out there don't always work as they claim to. Considering these facts, this post lists the 5 best VPN for HBO Max so that you can seamlessly watch films, shows, originals, and series on HBO Max.

How to Watch HBO Max No Region Limitations

According to HBO Max official, HBO Max is only available in the United States, certain U.S. territories, and the selected countries in Latin America, Europe, and the Caribbean. Nevertheless, living in these locations doesn't necessarily mean you have 100% access to HBO Max content because distribution rights, copyright protections, and censorship could become barriers.

The only way to stream HBO Max from all over the world is using HBO Max VPN. VPN works like a charm in concealing your online location and changing it into a virtual IP address so that you can pretend to access HBO Max inside the US or other endorsed countries. Moreover, HBO Max VPN can encrypt your traffic and make you anonymous online, which protects you from being tracked by ISPs, the government, and public Wi-Fi networks. Therefore, HBO Max VPN location changer is the best solution for unblocking HBO Max and bypassing country-wide restrictions in countries with strict online censorship.

Now you've understood how HBO Max VPN can help you watch streaming content without region limitations. But it's not that easy to find the best VPN for HBO Max among numerous products, especially if you had never used a VPN service and don't know what features should be considered. To help you out, this part walks you through the 5 best VPN for HBO Max with a detailed introduction to their speeds, server coverage, and add-on functions.

iTop VPN is the top pick VPN for HBO Max in terms of its generous free plan, solid and high speed, multiple-device login, extra privacy and security protection, as well as dedicated VPNs for streaming platforms.

iTop VPN offers an impressive free plan that allows you to access several locations without bandwidth throttling. For users who have a limited budget while want paid features, it's the best VPN for HBO Max.

It's known that some VPN services will dramatically impact your Internet speed due to the encryption process, server distance, and the VPN protocol. iTop VPN has been tested in professional performance benchmark, and its download speed proves to be solid and fast, especially in US locations.

This fast VPN is endowed with 100+ locations and 1,800+ streaming and gaming-optimized servers. iTop VPN takes more priority over USA servers, allowing users to unblock HBO Max from almost all over the world with no fuss. Besides, its multiple-device login feature supports 5 simultaneous connections, making it the best free VPN for Windows PC, Mac, Android mobile phone, iPhone, and tablet.

Different from other HBO Max VPNs open VPN protocols, iTop VPN enhances its secure ability by a fast proxy connection and customized WinDivert package, and then encrypts users' data with its own protocol. It also complies with a strict no-log policy, which means your browsing history, the bandwidth you used, or your original IP address won't be recorded or tacked.

How to Connect to HBO Max with iTop VPN?

Step 1.  Sign up for iTop VPN and install the right version on your device.

Step 2. Launch this out-of-the-box VPN and select a server in the location you are up to. To access HBO Max, a US IP address is highly recommended though you can also choose a server in another licensed region. 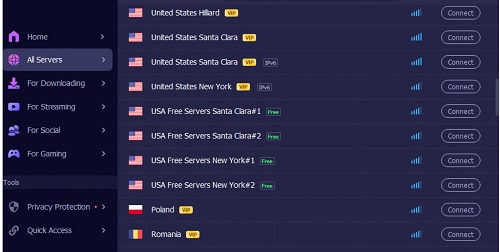 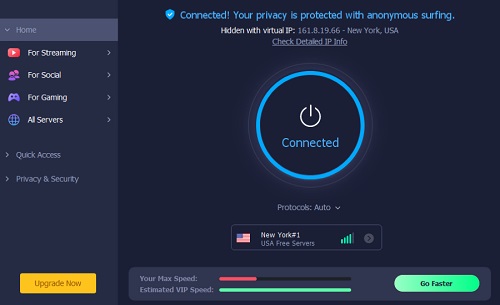 The next recommended HBO Max VPN is Express VPN, which is a high-profile product in many VPN reviews. It's undeniable that Express VPN has similar merits with iTop VPN such as lightning-fast connections, user-friendly interface, wide servers coverage in US cities, simultaneous device connections, and broad compatibility. However,  there are always two sides to every story. This VPN for PC is widely criticized for its high price tag. 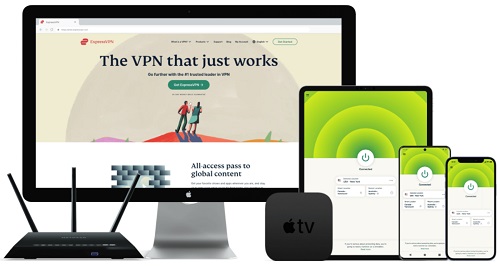 How to Use HBO Max VPN - Express VPN?

Step 2. Select a US VPN location.

Step 3. Log in to HBO Max and watch your favorite movies and TV.

The third best VPN for HBO Max would be Nord VPN. Similar to all other VPN introduced in this post, Nord VPN is reputed for not only being a functional HBO Max VPN, Hulu VPN, but also working on some other famous streaming platforms like Netflix US, Amazon Prime Video, and BBC iPlayer. But its security breach in 2018 did subtract some points from this product, and its desktop version will take newbies more time to figure out. 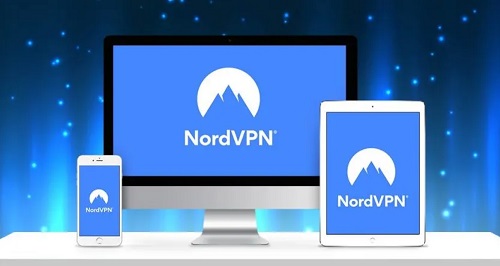 How to Use HBO Max VPN - NordVPN?

Step 1. Have the NordVPN app or chrome extension installed on your device.

Step 2. Make sure you choose a US location for HBO Max as other regions are currently not supported by it.

Step 3. Then you can sign in to HBO Max and start streaming videos.

Surfshark VPN, which also offers VPN for Windows free trial, is slightly inferior to the other best VPNs for HBO Max, while it still could help you to unblock geo-restricted HBO Max with average speed, simultaneous connections, and 256-bit encryption. But using Surfshark VPN for HBO Max is like a guessing game as you'll never know which US server location will work except for its default HBO Max US connection. 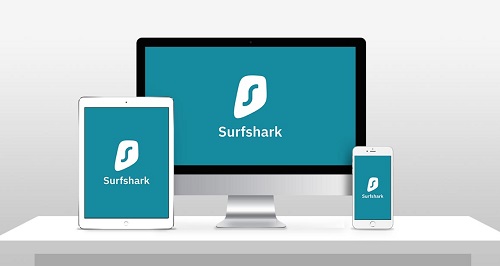 How to Use HBO Max VPN - Surfshark VPN?

Step 1. Pick the Surfshark VPN plan that works best for you according to your needs.

Step 2. Download the right app for your device and set it up.

Step 3. Type in "United States" in the search bar and connect to it.

CyberGhost VPN ranks as one of the best HBO Max VPNs because it has the largest server networks with 7410+ servers worldwide and an easy-to-use interface. It particularly optimizes some servers for streaming platforms, including HBO Max, without noticeable lag or buffering. But shortcomings like dodgy data jurisdiction and no security audit when disconnected cannot be ignored. 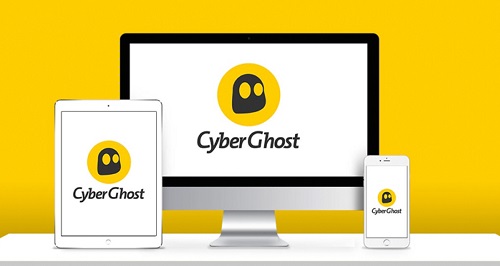 How to Use HBO Max VPN - CyberGhost VPN?

Step 1. Become a Ghostie by buying an appropriate plan.

Step 2. Set up CyberGhost VPN for HBO Max with a working server.

In case that you are in a hurry, this part puts together a table comparing the 5 best VPNs for HBO Max. You can also have a glance at this table and have an intuitive impression of their features, advantages, disadvantages, etc. so that you can choose the best HBO Max VPN product.

iTop VPN, obviously, is the best VPN for HBO Max unblocking in terms of comprehensive features. It's the only VPN service provider that keeps fast VPN free and is the one of most affordable HBO Max VPN tools. The number of the USA servers is another key point for bypassing geo-restrictions as HBO Max is only available in limited regions, however, Surfshark, which claims to have the most USA servers, doesn't perform as it promises. Therefore, iTop VPN is the top pick for HBO Max streaming due to its cheap price, coverage of USA cities, general compatibility, and powerful smart DNS proxy.

Though VPN is the only solution when you can't connect to HBO Max for region unavailability, you're not advised to pin your hope on any free VPN for HBO Max unblocking other than iTop VPN. Most so-called free VPN just won't work and some are dangerous malware to download and use. Generally, paid VPN products are more trustworthy due to optimized functions and reliable after-sales services, only if you can compare them and find the best HBO Max VPN that is good value for money.

All in all, iTop VPN outperforms the other 4 in unblocking HBO Max restrictions, in that it has a 100% free version, allows high-speed access to streaming platforms, supports multiple-device connections, and uses IPv6 privacy protection to empower security and privacy.