Whether you like football or not, I believe you have heard of the FIFA World Cup. The FIFA World Cup is not only the highest honor in football but also the most famous and influential event. Every time the World Cup is held, it will be warmly welcomed and discussed by people all over the world. As the 2022 Qatar World Cup draws closer, its qualifiers are getting hotter. But for some reason, not everyone can see all the live or broadcasts of the qualifiers. So how to solve it? Watching World Cup with VPN may be the best solution. 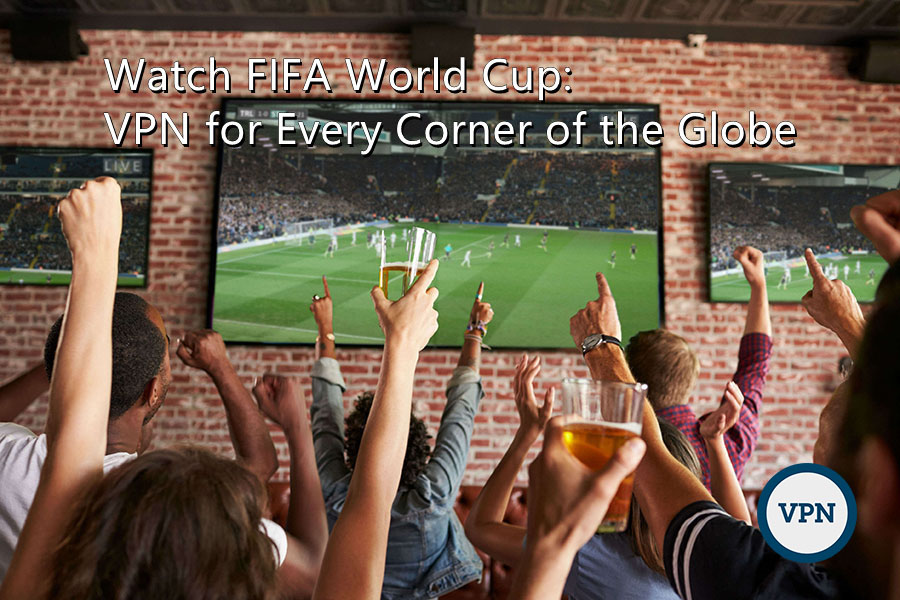 If you want to watch FIFA World Cup with VPN, then read on. You will learn how to choose a free and proven VPN and use it to suit your needs of watching the World Cup clearly and smoothly.

Why Do You Need a VPN to Watch FIFA World Cup?

As mentioned above, not everyone can watch FIFA World Cup qualifiers. It may be because there is no right to broadcast the World Cup due to geographical influence. It may be due to some reasons that the regular streaming media platform cannot be used. It may also be due to other reasons. The best solution is to use VPN. So why is it? It’s defined as the establishment of a temporary and secure connection through a public network (usually the Internet), which is a safe and stable tunnel through a chaotic public network. For watching FIFA World Cup VPN, it has two main features.

See all over the world

A FIFA World Cup VPN can watch qualifiers in all countries/regions, no matter where you live. VPN usually has many connections, and it can connect to different countries. You can choose a region you want to watch to connect, you can also connect to a fixed country and log in to free streaming.

VPN uses encryption technology to encrypt the transmitted data by establishing a tunnel to ensure the privacy and security of the data. So you don't have to worry about leaking your data and personal information. You can watch the World Cup with peace of mind. Now that you know the benefits of using a VPN to watch the World Cup, which VPN should you choose? After all, there are many watch FIFA World Cup VPNs on the market. Here I recommend iTop VPN to you.

iTop VPN is a Free, Safe, and Fast VPN. For you watching the World Cup, it has the following advantages.

It’s a free watch FIFA World Cup VPN. Although the daily data is limited on this free VPN, the basic use is no problem. You can watch your favorite World Cup qualifiers for free.

iTop VPN is a fast Watch FIFA World Cup VPN. With UDP protocol, iTop VPN can find the fastest connection, so you will not be affected by buffering, delay and bandwidth limitations while watching the World Cup. You can enjoy the best watching experience.

It is also a very secure and private watch World Cup VPN. With TCP protocol, iTop VPN can protect your online security and privacy at the highest level and prevent your data from being stolen. At the same time, you don’t have to do multiple-choice questions of "Speed or Security?" because iTop VPN also has an AUTO protocol that ensures you can access the Internet quickly and privately. When you use this secure VPN for PC or Android/iOS Phone, you can choose this mode to watch football.

This World Cup VPN can take you into the global network. You can log in to the streaming platform to watch World Cup qualifiers in your favorite region. You can also choose a different connection to find a local media or channels with broadcast rights.

iTop VPN has 1000+ servers, which can guarantee the fluency of watching the World Cup. With 100+ locations, you can enjoy the global network to watch qualifiers in different regions. Up to 5 devices mean that you can use different devices to log in at the same time.

It also provides an excellent customer service experience, providing 7*24 hours of service. In addition, for paid plans, if you are not satisfied with the usage, you can get your money back within 15 days.

How about it? Is it simple and easy to use? In addition to the above features, iTop VPN has other advantages. Such as hiding the IP address and so on. With it, watching the World Cup around the world is very simple. Let's take a look at how to use iTop VPN.

Also Read: [Hulu VPN] Work with the No.1 VPN for Hulu to Stream from Everywhere

iTop VPN is easy to use. There is no complex configuration and settings. You can use it to watch World Cup in simple steps.

Step 2: After downloading and installing, you will see a window as shown below. There are options on the window. You can choose the one you want from Home, and then click "Connect". 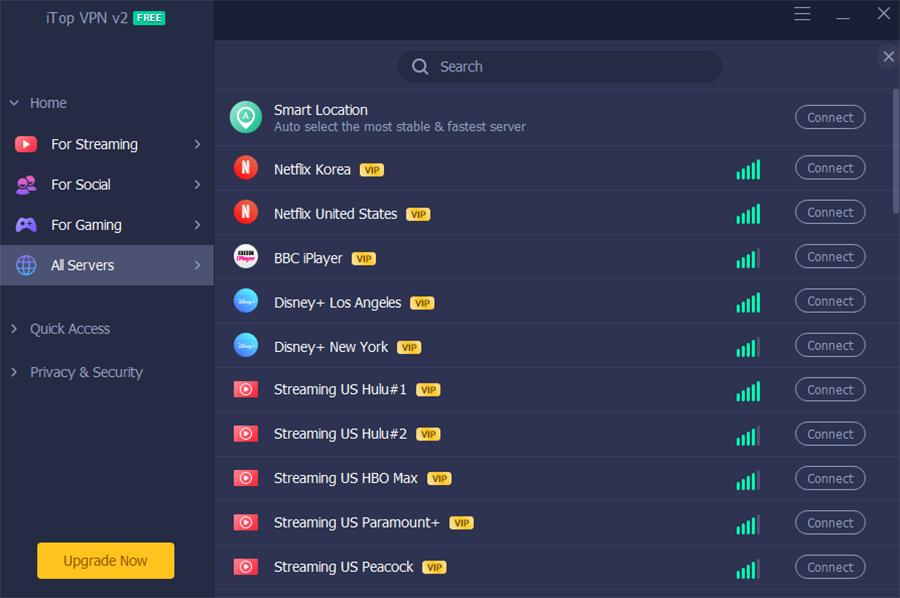 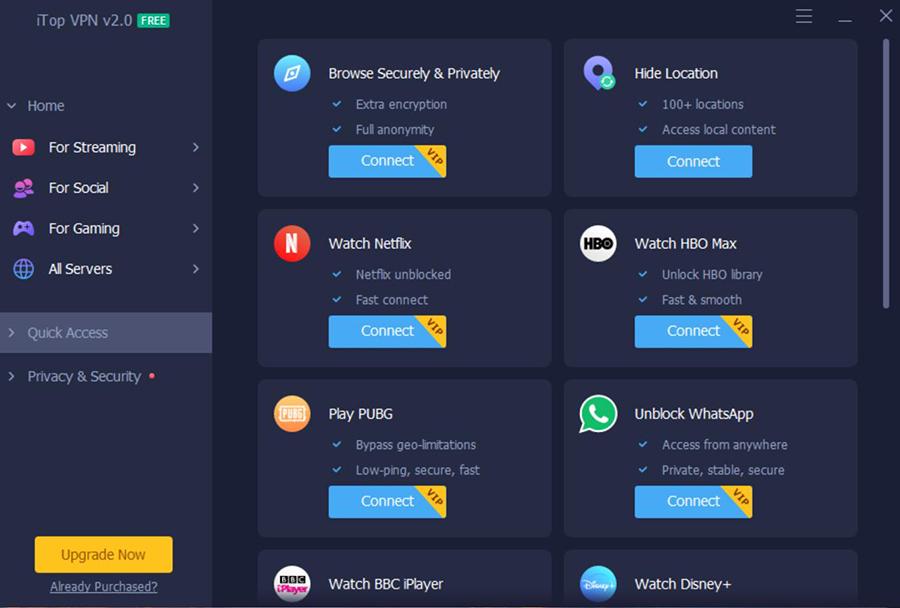 Step 3：After connecting, you can see the prompt of success on the homepage. And you can choose a protocol according to your own needs. 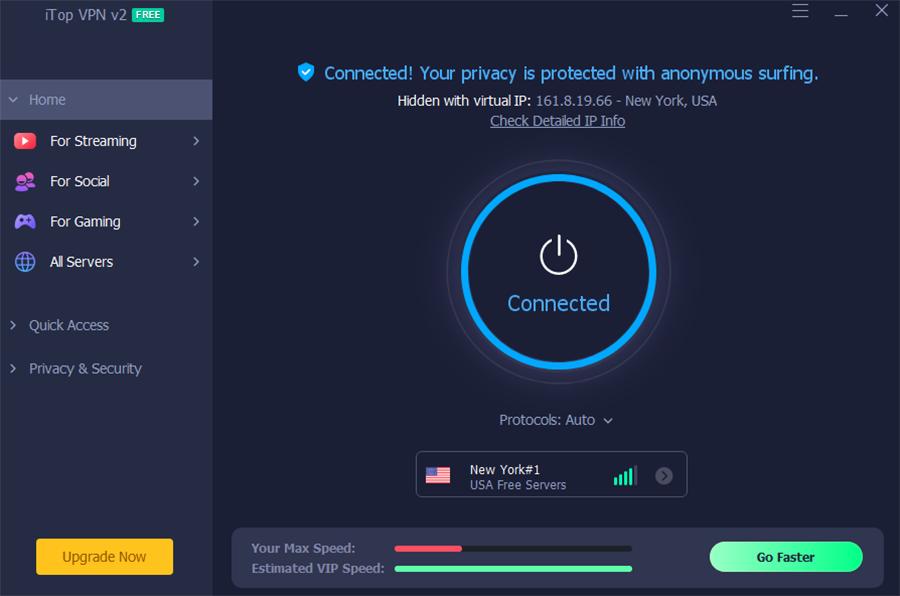 Step 4：Open a stream or channel and watch the FIFA World Cup.

Through the above, I think you already know why I recommend you to choose iTop as a watch FIFA World Cup VPN. It is free, fast, safe, and can enjoy global networks and more. Maybe you haven't heard its name very often, but once you use it, I believe you will always use it. As the saying goes: "Cream always rises to the top." In the past year, affected by the pandemic, the FIFA World Cup qualifiers have also been delayed. But now everything is developing in a better direction. Please enjoy the happiness that the World Cup brings to you with iTop VPN.