On the other hand, VPN, the Virtual Private Network. As an extremely important tool to protect your security when surfing the internet, attracting the focus of the great majority of Microsoft Windows users; since today the online security and information leaking are considered the most serious problems that threaten not only your internet surfing but also your property security & personal safe. Everyone wants free VPN for Windows today. 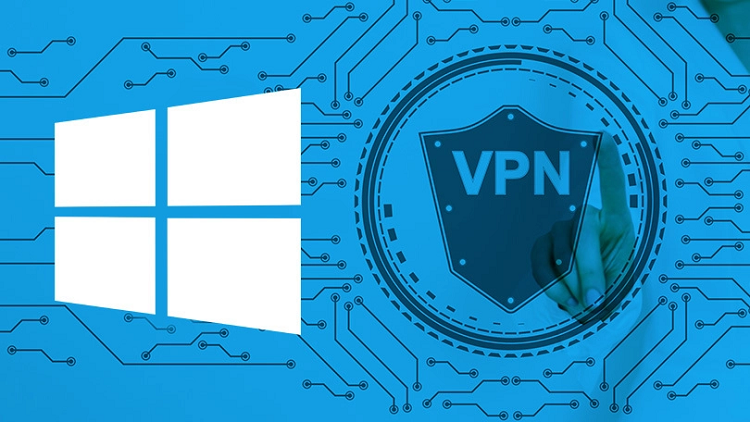 Thus, for enjoying a secure, free, unrestricted internet service, to figure out a way & find a VPN for Windows that meets your working/entertainment environment, is somehow a very high priority. If you are not yet clear about what VPN is and what VPN can do for you, the following part will present a brief intro about what VPN is (work on Windows) & give an entrance to the fast free VPN.

Benefits of Using VPN on Windows

How does VPN Work & Function on Windows?

By using a VPN for Windows, your communication with the internet (including input & output) will be packed by billions & trillions of data packages. Usually, the data packages will first go through your ISP server (Internet Service Provider, like Verizon, ATT…), then connect to others on the internet. By using a VPN, instead of sending your data directly to your ISP’s server, the VPN encrypts your data, including modifying some key information in order to cover your data & keep it private. And the VPN will re-route your connection through your chosen VPN’s private server rather than your ISP’s server (most are opened & exposed). And the data flows back will through the VPN, too. 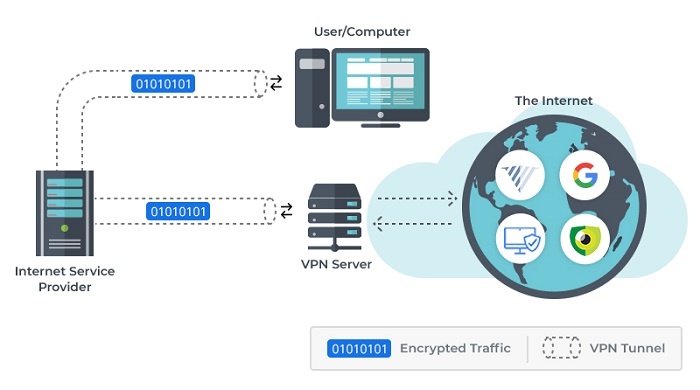 In the environment of VPN for Windows, the VPN creates a private data tunnel & connects your device to the internet with encrypted data packages. Which covers your data safe and ensures no one could access your private information & track your location, etc.

What Are the Benefits of Using VPN

Mostly, the benefit of using a VPN is concentrated on privacy protection & online secure. Depending on situation, the usage may extend to access to various internet resources, or to clean up your computer/ protect your system from malicious threats.

For most Windows users, especially for people who work remotely & serve in an important institution/ agency that requires the security of their working data. By using VPN for windows, in this case, your important files & data will be encrypted & transferred through a secured tunnel. Hackers and scammers will be blocked and get no opportunity to steal your data & information when you’re using VPN on Windows. A well made Windows VPN, like the iTop VPN for Windows, will perfectly resolve your security concern.

Once you use VPN as the portal of internet telecommunication, it will essentially act as your network proxy instead of your physical devices. Thus, the demographic location of VPN for Windows servers (which might be a thousand miles away from you) will cover your real physical address so that your actual location will not able to be determined. Over 80% of misappropriating credits, telephone scams, and identity theft are due to the leaking of personal address & contact methods.

Many entertainment giants, like Disney & Hollywood, invest millions to protect their intellectual properties. To restrict content publishing in different regions is also a measure to break down the pirate copy market chain. Not to mention that different countries have different censorship and policies towards internet content. For example, Netflix offers nearly 4,000 movie titles available for viewing in the U.S. But if you are traveling in Italy, you would have access to only around 2,500 titles even if you are using a U.S. Netflix account.The iTop VPN for Windows that offers the service which can help you break the regional limit & accelerate the network speed so there will have no buffer time when you watch regional-crossing videos & movies on Netflix & Hulu, etc.

Is There a Free Windows VPN that Secure Your Data & Bypass the Regional Limit?

VPN service isn’t something new today, and the free VPN for PC Windows not even rare. You may see hundreds & thousands of different VPNs for Windows free download on the internet. You can’t really ignore them since the windows free VPN Ads are literarily everywhere. For the majority of consumers, the things they really concerned about the free VPNs are:

1. If the VPN is stable & working properly.

2. If the charge of this VPN is actually worthy of its performance.

3. If the VPN can cover my daily usage & offers appropriate extra features. For instance: will the VPN service provide Netflix/ Hulu optimized line? Will the VPN support mobile acceleration?

4. If there is a disguised, forceful charge of that VPN service. For example, can we find a VPN that will not ask you to mandatorily affiliate with your bank & credit card information?

As we stated, customers need a real free VPN for Windows. If a customer can have a real free trial of VPN service, they would understand their real requirement (for VPN service) more precisely, lower the cost of investments & prevent possible economical loss.

Also, for many consumers, compared to a $30 per month subscription service, they would prefer a more agile, flexible use of VPN. Like occasionally hold an encrypted online meeting, download an important file from a regional blocked website. If there is completely free VPN software on Windows or mobile platforms and ready to use anytime & without asking for your banking information and subscribe. 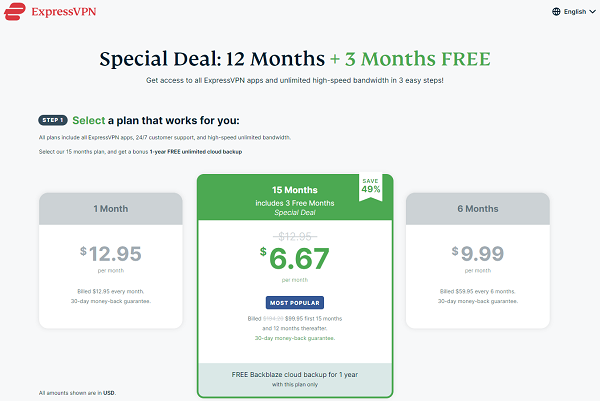 If you look at the best VPN software for PC in 2023, there will no accident to find that there is basically no mainstream VPN provider offer a “real free” VPN service.

NordVPN, ExpressVPN, Speedify does not offer a free trial for users. They can only admit a “30-day money-back guarantee” 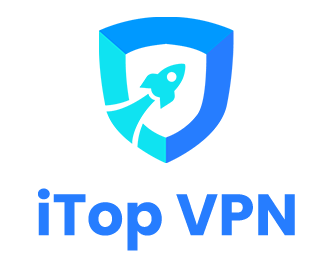 Some VPN providers, acclaim that they have a free trial, but will need you to subscribe to their monthly or annual service (payment will be charged after trial), The iTop does not. iTop VPN is guaranteed free-to-use VPN & requires you no bank account associate, the iTop VPN is a real free VPN for Windows to use.

There is one, the iTop VPN. Benefit from their professional technic on Windows software developing, the iTop VPN has presented astonishing variety & functionality. It can achieve all features that other VPN can do, meanwhile, it for other competitors they can’t do. And most important, the iTop VPN Windows offers a great deal when compare to other VPNs – It is completely free-to-use and ask no credit card affiliation & require for PayPal login. 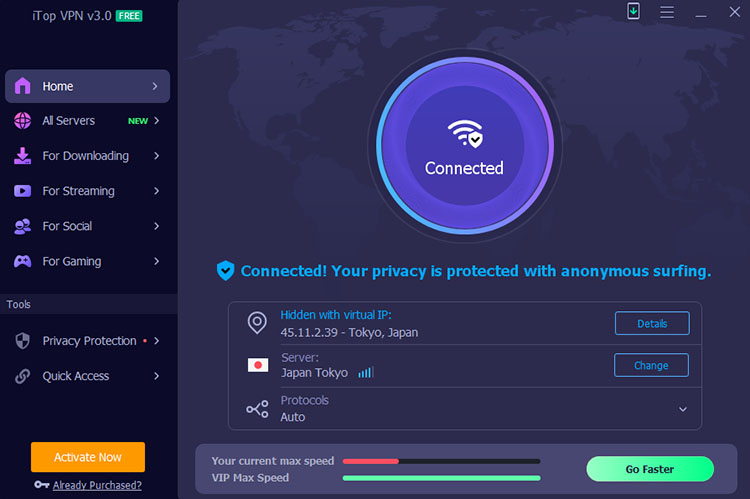 What iTop VPN Can Do For You?

Let’s begin with the most common usage of Windows free VPNs. iTop VPN for Windows takes the advantage of adapting bank-level security standard, means that your important personal information is encrypted and protected using the same banking industry-standard technology that banks used to protect their client. There will be no worry that hackers & scammers would possibly intercept your private files through the network, and your personal classified information would no longer be exposed to the government institutions & agencies which collect & gather your information to limit your freedom & choices.

By using iTop VPN for Windows, your real address and physical IP address will be covered up and your ISP will not able to locate your real IP. Thus, the ISP will not be able to intercept your data package and monitor your online activities, which could be sold to big companies for their accurate advertisement delivery. You can also prevent possible harasser by covering up your real address when surfing online.

Geo-blocking isn’t fresh today in the world. You can’t watch HBO Now if you are not a U.S. resident. As we said, the library of Netflix is various in different countries (the US has more than 4000 movies and Italy has only 2500). All these kinds of problems can be solved by using an iTop VPN. The iTop VPN for Windows provides dedicated tunnels for different usages. All using environments are taken into the developer’s concern. Both online video streaming, social networking, and online gaming are offered as geo-limitation-breaking options. You can all enjoy these benefits, just download itop VPN for Windows PC and go for it.

Get to know more about break the regional limit, also read >>Speed VPN for PC: Get Access to Any App or Regional Limits Easily & Quickly [2023]<<

What iTop VPN Can Brings You While Others Can Not?

Benefit from the cutting-edged PC optimizing software development experience, the iTop taking impeccable advantage of optimizing the performance and safety of your internet browser. The iTop VPN for Windows browser clearer features not simply delete your browser history, but deeply clean up your temporary files so that hackers and others will not able to trace your private info by analyzing the temp data packs on your computer. Also, any piece of data that possibly exposes your identity will be hidden & protected by using iTop VPN free. 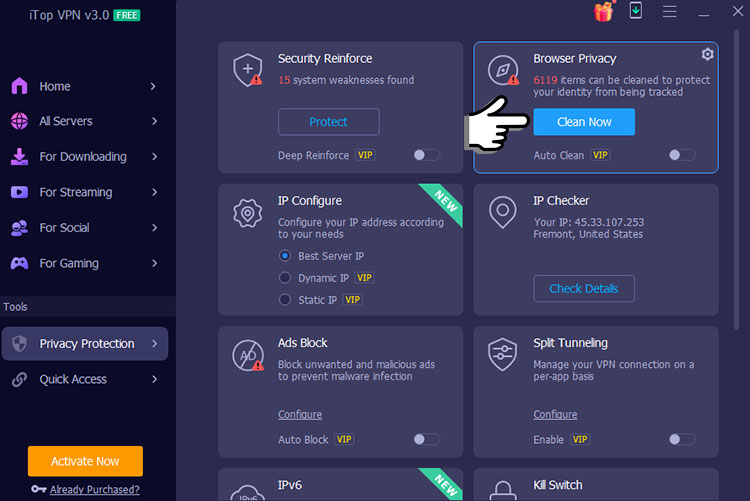 Internet is now highly monetized. Hundreds & thousands of tech companies & businessmen, yearn for your personal information and can’t wait to dig your consumption power up for their business interest. By clicking Ads, the A.I. algorithm will receive positive and negative feedback and your personal profile & consumer portrait will be generated. 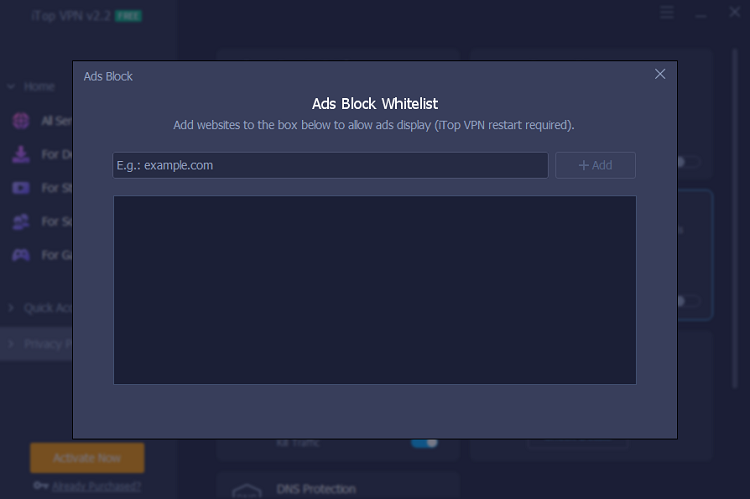 More Advertising will come up with the information they gathered from you. The iTop VPN for Windows AdBlocker will block the internet Ads for you as a way to protect your private section, also reduced the threat from phishing website & NSFW content, keep all these distracting Ads away from your screen.

Real Free to Use

The iTop VPN is a real FREE VPN for Windows to use. Different from other VPNs which will need you to subscribe to their monthly service plan with your banking information (the purchase will generate immediately once their so-called “Free Trial” is terminated and the payment will be transferred).

The iTop VPN is a real Free Windows VPN because you don’t have to affiliate any of your personal info to free use this VPN. It has a 700 megabytes data pack each day for free users and reset every day. If you are lightweight users who want to visit websites privately or play a cross-region online game, the iTop VPN is the best real free VPN for you.

Indeed, there are many options for VPNs for Windows on the market, but if you are seeking a real free Windows VPN that ask you no credit card information . Or seeking an alternative handy VPN for transmit some important flies or vising some private website, the iTop VPN is might be the best and irreplaceable choice for real free VPNs on Windows and many of them are free VPN for Windows. I would strongly recommend you to have a try, to see if you really need a VPN for your work & life, then make your further choice.