Selection Guide 2023: What is the Best VPN Free Download for Android

Afraid of personal privacy leaks online? Get the best private VPN free download for Android to protect information and data, then you get a private firewall.

You think that as long as you have a cell phone and an Internet cable or WiFi, then you can surf the internet freely without additional worries, don't you? Actually, you are swimming naked online, exposing your sensitive information, as other users who have no best VPN for Android free. Even you are using a private internet connection, your IP is still visible for Internet Service Providers and technical hackers, not to mention using public Wi-Fi. 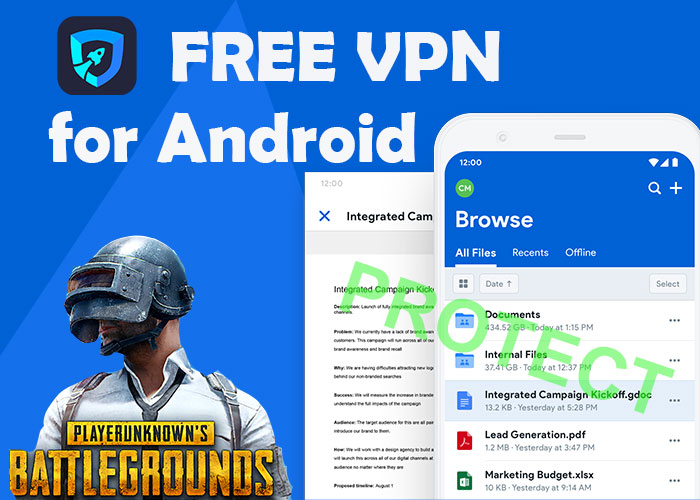 Whether you want to play games on PUBG, watching videos on Netflix, transferring important files through the internet, or learning about other countries' information, you need the best VPN for Android free to keep your privacy safe. No matter where you are, whatever you want to search online, the VPN for Android phones makes the world close at your fingertips within a few clicks.

How Does VPN Work?

VPN(Virtual Private Network) is known as its special way to protect users' internet browse data and break the restriction of connecting data.

When you connecting the internet via a VPN with Android, VPN will encrypt your sensitive information during the process of searching and receiving data. And the VPN Provider's Server will change your real IP to avoiding hackers and ISP log it. In brief, with a VPN, it's 100% possible to get what you need online but no one knows who you are, where you are, and what you did.

Criteria You Should Notice When Choosing Best VPN for Android Free

You might have nothing need to hide, but you certainly have something to protect. So when it comes to choosing the Best VPN for Android, the following 3 things you have to pay attention to.

The hidden threat of VPN security mainly comes from two aspects: the VPN itself and external factors. So if a VPN can effectively block malicious ads and malware, and it states seriously in its privacy policy that it won't record your browsing history and collect your personal information, then you can add it to your options list of best VPN for Android free download.

Generally speaking, free VPN will be limited in function, so when choosing VPN for Android Free download, in addition to its privacy protection function, we should also compare its limitation-breaking function. Whether it allows you to freely use mainstream browsers, Google Chrome, Firefox, Edge, and others. Whether you can smoothly watch TV series that are blocked in your country, and use foreign social applications like Twitter and Facebook, and so on.

When speaking of the stability of a VPN, we usually refer to the stability of a VPN's cyber connection speed. As a matter of fact, VPN servers' quantity, severs location, protocol type, and encryption level are all influence factors to the VPN network. Hence, A VPN with a moderate number of servers, a wide distribution, and a high level of encryption will be your first choice for the best private VPN download.

If you are interested in the differences between the free VPN and the paid VPN, you can click the link "free VPN vs paid VPN" to get a general idea.

According to the upper 3 metrics, a VPN for Android free named iTop reaches beyond the above requirements. As an up-rising star among various famous VPN out there, iTop devotes itself to flip the downsides of most VPNs. 100% No Log and Banking-level Encryption.

Why iTopVPN is the Best VPN for Android Free?

Based on the guarantee of offering the best totally FREE VPN for Android, then we also need to learn the details about why iTop meets the demands of a secure, fast, and reliable VPN.

It is written in the iTop VPN Privacy Policy that they do not log your activity, including browsing history, the bandwidth, the connection time, and they do not store the original IP address or the server IP address that you used either.

Moreover, iTop's Banking encryption completely cuts off the hackers to collect your personal details and ISP to snooper out your sensitive information, especially secures your Online Banking Services under Public Wi-Fi. Despite the best-in-class encryption, it has another double protect measures, DNS Protection and Switch Kill. So if you are visiting a website directly through a domain name, iTop will keep the network connection fast and steady. Or if you are suddenly out of service, iTop will auto prevents virus attacks.

To achieve the goal of allowing users to access the internet freely and unimpeded, iTop VPN for Android provides a rich choice of features. More than 10 global mainstream browsers and dozens of fast channels intelligently choose the best performing servers to meet your different needs. In this way, you can watch Breaking Bad or Black Widow on Netflix anytime and anywhere, play PUBG on your Android phone within the school's LAN, and you can have video chats with foreign friends in the UAE on WhatsApp as well.

Compare to NordVPN, which has more than 5200 servers, iTop featured 1800 server options to avoid control oversight of the server network led by managing too many servers. However, iTop is cautious about choosing server locations. Servers spread in the United States, Russia, Australia, the United Arab Emirates, Brazil, Singapore, and more than 100 regions.

It also provides you with a smart connection to the most suitable protocol for the current use of the scene, to ensure that you are using a fast and stable network. TCP's low latency is good for playing games, UDP is fast and is good for downloading and watching TV, and HTTPS does well in breaking the limits which can be used in LAN and campus networks.

Don't worry that the cyber connection speed will be affected when you using a VPN for PUBG with your roommates using the same iTop account. Because iTop will choose the real-time best performing server for you.

How to Use iTop VPN for Android Phone?

Simple 3 steps to building private firewall access to the Internet on your mobile.

Step 1: Download the iTop VPN app in Google Play. And click “OK” to set up your private VPN connection.

Notice: iTop supports VPN for Android, PC, and iOS, and you are allowed to connect 5 devices at most concurrently by logging into one account. 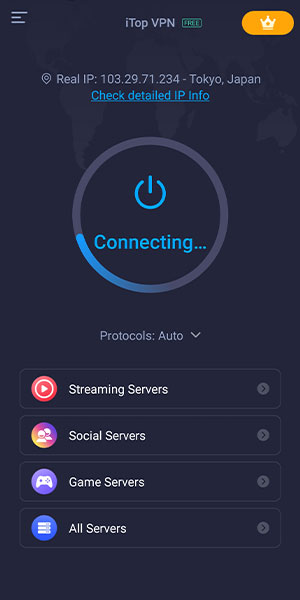 You can not create your iTop account but owning an account enables you 5 simultaneous connections from 3 ports. Furthermore, you can go to the quick channels for videos, games, and social activities.

Notice: The Android version of iTop VPN is now under maintenance. You may also want to find a free unlimited VPN for Windows, iTop is also a great choice.

Know well about iTop through the above table.

Nowadays, we live in the Internet era full of open and transparent information. The spiny problems like how to protect personal privacy and prevent data leaks make netizens stressed out.

To solve this, you are recommended to use iTop VPN for Android free. It allows you to transfer important files remotely over your home network, or watch aboard TV shows over public Wi-Fi. High speed, fluency, and no extra worries of risks.

Anyway, it's safe and free, why not download iTop to give it a try?