VPN for Australia IP & Australian Use - Secure and Free

This article introduces a top secure VPN for Australia that allows you to change your location and access any IP address you want including Australia!

If you are visiting Australian websites with a foreign IP address, you probably face the problem of website restriction. Therefore, it is necessary to have a VPN for Australia for full accessibility when people outside Australia want to access their Australian bank accounts or keep streaming shows on local television channels such as TenPlay, Foxtel, Netflix Australia, and 7plus. 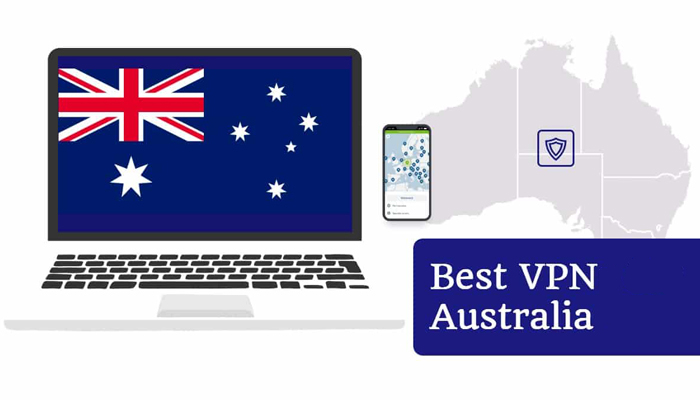 In addition, ending messages with a public Wi-Fi network is often unsecured, and hackers could easily decode the passwords, causing a financial loss. So, for those inside Australia, they might also use a VPN for Australia on public Wi-Fi as a kind of protection for their laptops. This article gives an in-depth guide on VPN Australia and teaches you how to get an Australian IP address quickly.

Is It Safe to Use A VPN Australia

As one of the most privacy-invasive countries in the world, Australia has strict supervision of its citizens’ digital activities. Since the data retention legislation (Telecommunications Interception and Access Amendment Act 2015) came into effect in March 2015, Australia has seen a rapid growth in VPN usage.

The result is absolutely within anticipation since no one wants to be under surveillance. Many people believe data retention offends information privacy laws, and it would cause a series of negative consequences such as information reveal and hacker attacks. Luckily, using a VPN is legal in Australia, which gives a short relief to Australian people.

VPN Australia not only protects Internet privacy but also allows people to torrent copyrighted materials in Australia without breaking Australian laws. Changing your IP address to other countries, you could browse more than 180 websites such as ThePirateBay, SolarMovie, Torrentz, IsoHunt, etc., which are blocked by Australian Internet service providers (ISP).

What's the Best VPN for Australia

To break the geo-restriction or bypass government surveillance, you need to acquire a VPN for Australia. Before choosing a VPN Australia, here are several things you have to take into consideration: worldwide servers, security & privacy, speed, cost, bandwidth, etc. With thousands of VPN for Australia in the market, the article introduces a free and reliable network solution: iTop VPN.

No matter you want to unblock prohibited content or hide your digital activities, iTop VPN meets all your needs. It protects your domain name system (DNS) from attacks and offers an IP checker tool for free. While guarding your privacy, the VPN also allows you to transfer data at a blazing-fast speed. Let us take a look at the main features of iTop VPN below:

Free to Use: The iTop VPN provides a free data pack of 700 Megabytes for Windows devices, which resets every day. You could continue to enjoy the free service from iTop VPN the next day after reaching the data cap. The 21 Gigabytes VPN per month that could use without a cost makes iTop VPN the best free VPN for Windows. Besides, iOS users can enjoy the 7 days free trial and permanently free access for Android users. Meanwhile, iTop VPN supports up to 5 devices connected simultaneously, and people could make the most use of the free VPN Australian.

Multiple Servers: One distinctive feature of iTop VPN is its global connection that covers all over the world. The iTop VPN provides more than 1800 servers in over 100 locations including Australia, United Kingdom, United States, India, Russia, Germany, France, UAE, Japan, etc. With iTop VPN, people could easily hide their IP addresses and access the services blocked in the current area.

Security & Privacy: The iTop VPN has best-in-class encryption that protects your personal information from leakage. When you are disconnected unexpectedly, the Kill Switch would automatically cut off all the connection tunnels and stop traffic from leaving or entering your device. What's more, iTop VPN removes pop-up advertisements and blocks malicious links when you surf the internet. You could also clear up your browser traces such as browsing history, cookies, and caches.

You May Need: Best Free VPN in UAE

Guide to Use the Best VPN Australia

After getting to know the features of iTop VPN, this part would shed some light on how to use iTop VPN to get an Australian IP address and hide your digital activities.

Download the different versions of iTop VPN for Windows, Android, or iOS systems as per your needs. Install iTop VPN software on your device.

Set up iTop VPN on your devices. There are three tabs on the left column of the interface: "Home," "Quick Access," and "Privacy & Security." Click the corresponded tabs to customize your VPN settings. 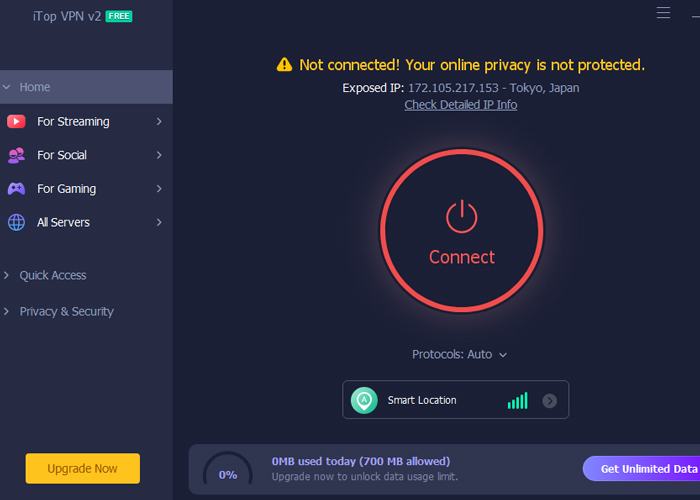 Tap “All Servers” under the “Home” tab and input Australia in the search bar to get the VPN to Australia servers list. Or, connect to any IP address you are interested in with the powerful iTop VPN! 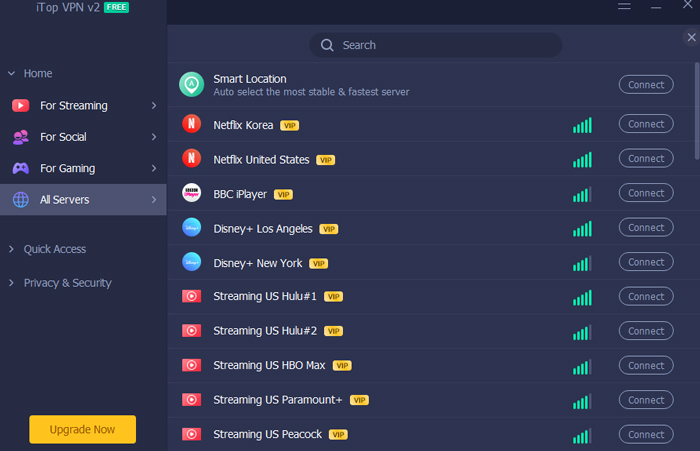 In the Age of Big Data, people are being productized, and personal information could be sold to anyone at a price. There is a rising concern about the security of information storage in big data. Taking action to protect individuals’ privacy from illegal data collection has become an urgent need, especially for Australians living in a country with strict digital surveillance.

To stay on the safe side, you need a reliable VPN for Australia, and iTop VPN is the one you could trust. This best VPN for PC, Android and iOS offers a global connection with unlimited bandwidth, and we strongly recommend you download and take a trial with its free plan.