Why Is Squid Game So Popular? & How to Watch Squid Game Netflix If It Is Blocked?

Why Is Squid Game So Popular? Check out the 5 reasons in this blog and learn how to watch Squid Game Netflix with iTop VPN if the Content or Netflix is blocked in your region.

Everywhere on the internet in these two months, you won’t be unfamiliar with a giant creepy doll wearing the orange dress, horrified people in blood-stained green tracksuits, or mysterious pink guards with masks. Those are the icons of Netflix’s break-out dystopian Korean drama “Squid Game”. 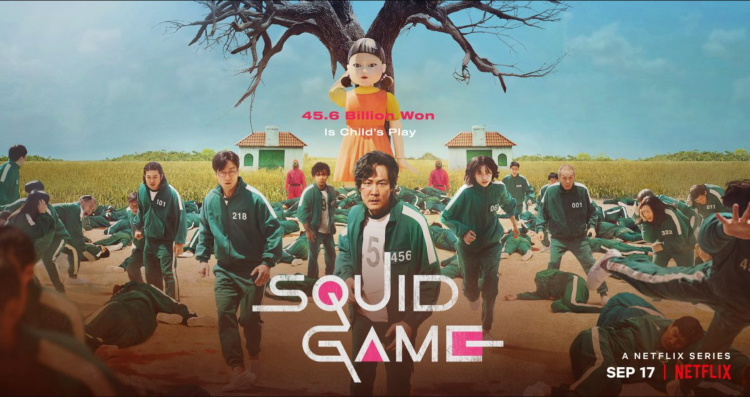 Despite its lack of promotion, Squid Game Netflix has become the most-watched ever Netflix series in more than 90 countries, breaking the record set by the former champion Bridgerton. Accordingly, 111 million people have watched the survival thriller in the first 28 days after its release on September 17th. And the popularity continues rising as the Squid Game challenges and memes go viral on TikTok, Instagram, and other platforms.

Contents
Why Is Squid Game So Popular?
How to Watch Squid Game Netflix If It Is Blocked?
Why Is iTop VPN Your Best Choice to Unblock Netflix & Stream Squid Game?

Why Is Squid Game So Popular?

Squid Game Netflix tells a story that happens to a group of debt-ridden people, who are lured to compete in a 6-round children’s game for 456 billion won ($28.2 million). The price is huge, yet the cost, which they find out later in shock, is deadly. Whoever loses in the game will be exterminated immediately, and in the end, there will be only one person left. The winner takes it all from that piggy bank while the rest of 455 people will die one after another in cruel and nearly inhuman ways. 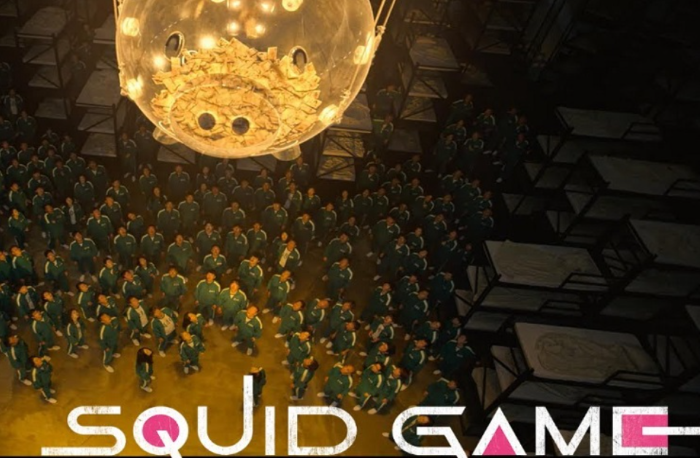 Squid Game is not something new. Along the years, we have the trailblazer Battle Royale, blockbuster The Hunger Games, then came The Maze Runner and Alice in Borderland, however, none of them had achieved such glory as Squid Game did.

Why is Squid Game, a non-English drama  based on Korean children’s games, turns out be a global fascination? The following 5 reasons might give you some hints for the answer.

Born in the post-pandemic era, Squid Game resonates with the global citizen more than any other TV series or movies. In the drama, the financial burden that all contestants carry, the nerve-racking life and death moments, or the torn between money and morality, though fictional and exaggerated, are very much like the mental stress that we have gone through during the pandemic and lockdown. That was a time when millions of people lost their jobs, the world was dividing, and the misinformation confused people’s judgment.  Watching Squid Game allows the audience to feel sort of related so that those negative emotions gain a little bit of release.

2. Stunning Performance from All Cast

The Squid Game actress HoYeon Jung, who played a North Korean runaway in the 9-episode thriller, gained more than 21 million followers on Instagram within just 20 days. The audiences are so drawn to her steeled poker face tinged with a streak of melancholy and determination. Now she is known as the most followed Korean actress thanks to her amazing debut in this show. 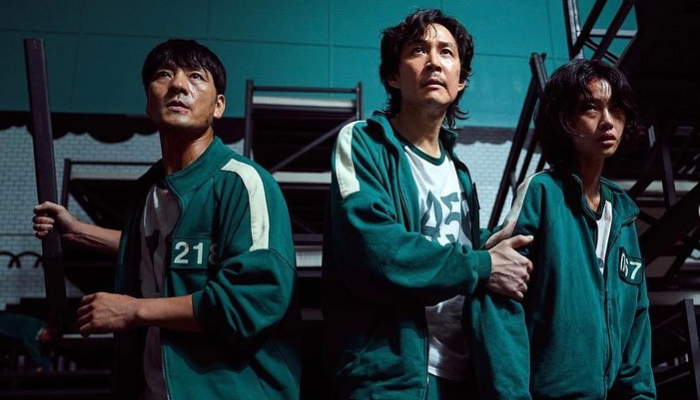 The protagonist, played by Lee Jung-jae, reserves the last glimmer of hope for our humanity in that ghoulish game, despite he is gambling-addicted and lives off of his old mother. And the vanillin Jang Deok-su, annoying but queen-like Han Mi-nyeo, well-educated yet bancrupted Chong Sang-woo, miserable immigrant Ali, “satisfied” policeman, etc. all bring out the best of the  best in this drama with their stunning, genuine, and talented performance.

The aesthetic of Squid Game is very impressive, too. From the costume to the scenes shifting between different games, everything is vibrant, colorful, and creative, for example, the cute honeycomb candy, maze-like pink staircases, and the striking “school-dorm” camp. All those stylish settings make Squid Game contrast to other survival thrillers, which are set in a dark, gloomy and depressed mood. As for the audience,  soft and romantic visual effects ease our nerve to sidetrack from the bloody violence and piles of corpses at the end of each game. 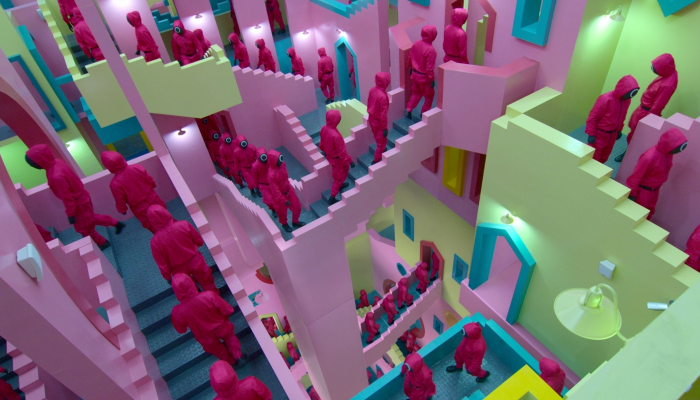 4. Critique of the Reality

Squid Game is not merely about meaningless violence or the distorted pleasure of killing. It shows and undresses the dark side of capitalism, in which money superiors anything else even our humanity and the fate of the  poor is manipulated by the rich.  Besides, Squid Game Netflix also comes down to the socioeconomic distress that haunts the South Korean people - household debt crisis, which is highest among Asia; the income inequality where the top 20% earners get 166 times more than the bottom 20%; the extreme competition that resembles the merciless game in the show.

5. Word of Mouth on Social Media

There was no promotion before Squid Game’s release but it ascended to be the most-watched Netflix series. The credit has a lot to do with the pervasive presence on social media. On Tiktok, “#SquidGame” has been viewed more than 28 billion times, a statistic from NBC news; on Instagram there are countless Squid Game memes; game players have fun on Roblox Squid Game; you can not escape from the bombardment on YouTube, either. Squid Game Netflix is everywhere on the Internet. 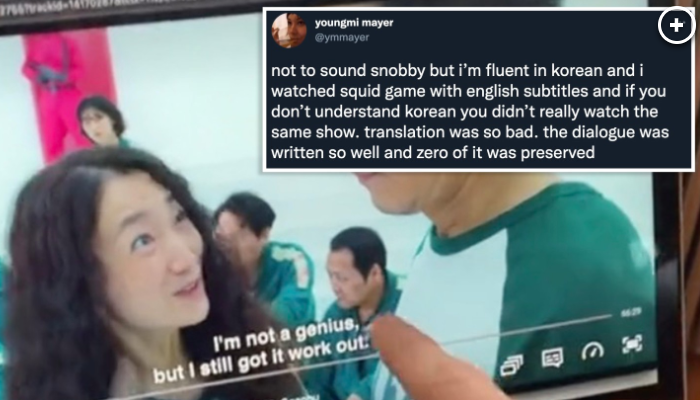 How to Watch Squid Game Netflix If It Is Blocked?

As a fan of The Hunger Games, Alice in Borderland, or any other dystopian thrillers, you can’t miss the global sensation Squid Game. If some of you have no access to the Squid Game Netflix, whether because of traveling or blocked, you can use a Virtual Private Network (VPN), such as free iTop VPN to unlock Netflix and stream Squid Game anywhere freely before the social media spoiler ruins your interest.

How to Use iTop VPN to Unblock Netflix & Watch Squid Game Anywhere?

But if you have no access to it due to regional block, you can use fast VPN free to unblock Netflix to stream Squid Game anywhere. 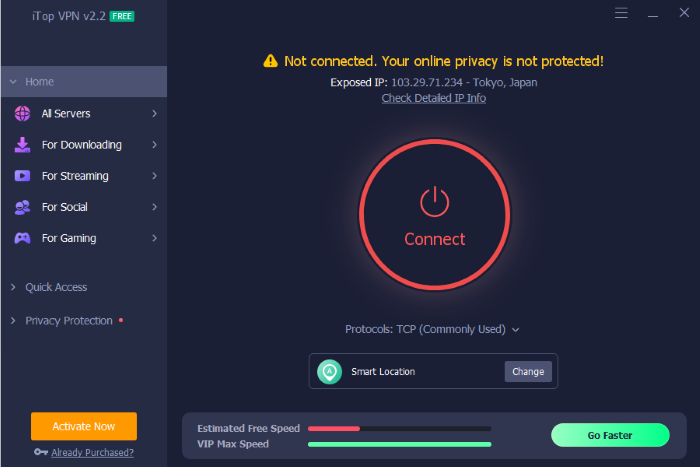 iTop VPN will automatically recommend you the best server to connect to. Of course, you can choose servers that are available for Squid Game streaming by yourself. The upcoming new version will even store your most frequently used three servers, so you can unblock Netflix easily and swiftly. 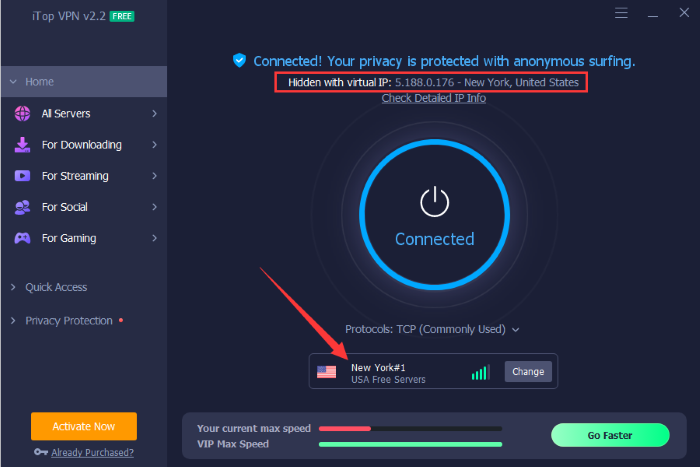 A VPN will encrypt your data and mask your IP address so that no one, not even your ISP (Internet Service Provider), will know what you’re doing online.

It works by routing your data traffic to the VPN server you choose through encryption. Then, from the server after decryption, your traffic will be again sent to the internet, so the website or app you’re visiting will think your IP address is from a different location. That is how you bypass Geo-block to stream Squid Game Netflix or access any other content safely like Ricky and Morty Season 5.

You are advised to have a VPN not only because of the freedom to stream any content and use foreign apps but also out of the safety concern in increasingly dangerous cyberspace.

Besides the numerous servers worldwide it provides, iTop VPN is also the best free VPN for Windows and your best choice to unblock Netflix and watch Squid Game and any other Netflix series anywhere.

Fame always comes with controversy. Several days ago, a council in the south of England has urged parents not to allow children to watch Squid Game Netflix after hearing reports that kids are imitating the violent challenges. Netflix also rates the show appropriate only for kids over 15. So your kids are not allowed to watch it. But if you’re an adult and curious about the drama, you can watch Squid Game with iTop VPN and unblock Netflix for other popular Netflix series.