How to Get Chicken Dinner Tonight with the Best VPN PUBG Mobile VPN?

Need to beat the game and win the chicken dinner? Play PUBG with a better network with the best VPN PUBG & PUBG Mobile VPN.

There are times when you need a VPN application for the sake of changing your location to avail yourself of opportunities. Some federal departments block the access of particular applications temporarily for minor reasons. Some users search for PUBG Mobile VPN when PUBG is temporarily blocked from their regions.

People tend to use PUBG Mobile VPN to access certain exclusive awards that are available in specific regions. Another reason includes playing some exclusive events that are only for a particular region. It is legal, but its legality also depends on its usage. There are many VPNs available that work with unlocking PUBG in your area.

Here, we will acknowledge why we need a VPN and introduce a top-notch VPN, its features, working on Android and iOS devices. 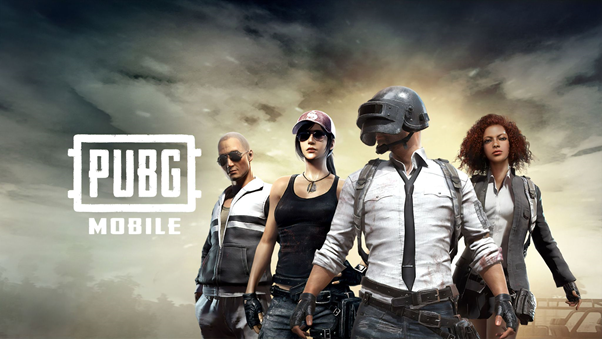 What is PUBG Mobile VPN & Why You Need It?

The main question arises why people need a PUBG Mobile VPN on their phones. Here, we will recognize the reasons to use a VPN for the PUBG game.

What is a PUBG Mobile VPN?

PUBG Mobile VPN is a virtual private network that allows making a safe connection with any system over the internet. It hides your IP address, and you can use the IP address of any country to save your country's identity. You can get to district confined sites with a VPN and hide from dangerous people or open Wi-Fi.

In simpler terms, a PUBG mobile VPN will associate your identity to the country you will choose yourself. Whenever the server is in an alternate nation, you will be shown from their nation. This helps shift your system's traffic to another system. You can reach the assets of your neighborhood and bypass internet oversight like no big thing.

Why do we need a PUBG Mobile VPN?

There are multiple reasons for using a PUBG Mobile VPN. In short, it is a very easy way to play this game without any obstacles. Following are some reasons why one opts for PUBG Mobile VPN apk download for playing PUBG games.

PUBG can become a very competitive game. It can lead to DDoS attacks raised by your opponents that overwhelm your connection with a server and block your information. Since the VPN changes your IP address, you can stay protected. Moreover, you can also access PUBG lite by switching your country with the selective country that allows PUBG lite.

Some people face this issue that at first, their game works smoothly, but after some time, it starts lagging. This can be due to the congested connection between their ISP server and the PUBG server. Another reason can be their throttled bandwidth.

ISPs mainly throttle people’s connection when they continuously use a high amount of bandwidth, play heavy games, use torrents, or watch in HD. You can save yourself from this issue and play smoothly by changing your IP address.

PUBG can be your craze, but your regional restrictions can be an obstacle in your passion. With PUBG Mobile VPN, you can bypass all political and censorship issues and play the game with PUBG Mobile VPN apk download.

For example, South Korea has restrictions to play games if you are in a certain age group. You can overlook such restrictions by connecting yourself with a supported region and say bye to hurdles while playing your favorite game.

While playing PUBG, you can be at a certain disadvantage while playing with different country's players if your internet connection is very slow. You can even overcome the hurdles if you choose to switch your region with a country having a lower average internet speed.

There are restrictions in the PUBG game, which locks contents in some regions while allowing them in other countries. You can unblock those contents by switching to a region that has those unlocked PUBG features. This helps play the game smoothly and easily due to PUBG mobile VPN iOS trick.

iTop VPN, as described by the name, stands as a supreme PUBG Mobile VPN now. It is an accessible application with secure features and super-fast working. With over 10 million followers from around 195+ countries, it is one of the best possible options as a PUBG VPN. 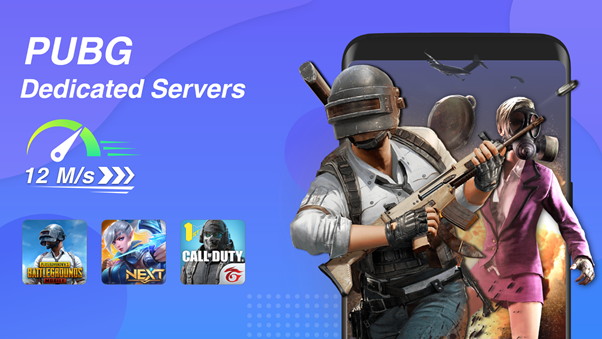 You can secure almost all of your devices, including operating systems of Windows, Android, or iOS. It has an extremely easy-to-use interface that allows you to connect to several servers by just clicking on them. It has military-grade security that never compromises user protection.

If anything happens and the connection gets disconnected, there is a kill switch that automatically disconnects the user from the internet and protects him.

Notice: The Android version of iTop VPN is now maintenance in progress. Users can choose iOS or PC version instead to enjoy the PUBG game.

Besides its smooth working, iTop VPN offers many other vital features that make it the best VPN free application. Following are some key features of iTop VPN that reveal its best skills.

There are three different modes of iTop VPN. You can choose according to your priorities. The safeguard mode is for those who care about their privacy a lot. The balanced mode balances both game features and privacy accordingly.

The other mode is a game mode for people who prefer ultra-fast streaming and gaming. All of them are based on their usage, and you can select any of them according to your priority.

VPNs are created to respect user's privacy and provide them better opportunities to browse and play games. There is no point in a VPN if it is breaching user privacy. The no-log policy launched by iTop VPN ensures that no user data is being recorded. It will not deal with selling your information or identity to anyone by recording your information and online activities.

iTop VPN provides a kill switch facility that works as a moderator. If your VPN service stops working, the kill switch will work for you and obscures all the internet traffic from being exposed to the web. The VPN makes it dependable that your sensitive information and identity are under protection.

Some streaming content is unavailable in some regions due to censorship issues. By using iTop VPN, you can unlock the streaming and various libraries on Netflix too. This will lead to unlimited access to different HD movies, games, and other exciting shows.

Bandwidth caps can be the real hurdle in streaming or doing anything online. They limit you from going online, and browsing becomes a painful task. iTop VPN gives unlimited bandwidth that enables you to play heavy games, download larger files and watch HD shows.

How does iTop VPN work on Smartphones?

There are a few short steps explained that you need to abide by for connecting your device to another region.

Reach to the application store of your smartphone and download iTop VPN within a few seconds on your phone. 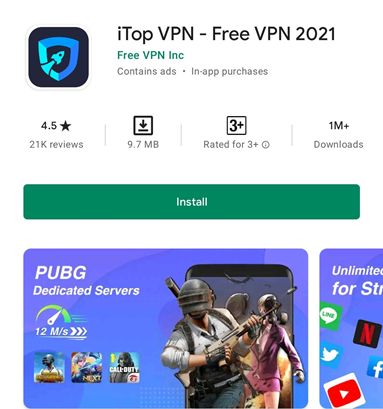 Now, a connection request appears that would monitor network traffic on your server. Click on the "Ok" to give it access.

iTop VPN will connect you with any region's IP address according to your choice. You can also select network protocols from the settings rendering to your priority.

The article concludes with a brief introduction about a VPN and why it is being used to play PUBG for ease. Later, we have recognized 5 major reasons to use a PUBG Mobile VPN that includes facilities of higher internet speed and larger bandwidth.

The article also introduces us to an excellent VPN named as iTop VPN. We have discussed its supreme features along with its setting-up procedure. The article holds much help for people looking for an authentic review on VPNs.