How to Watch NFL Games Live in Anywhere with A Free VPN?

How to watch NFL games live online with a free VPN? Check out this article to find the best option in 2023!

NFL, also known as the National Football League, is one of the major professional sports leagues in North America. With millions of fans, the NFL could be the most popular game that represents the highest professional level of American football in the world. 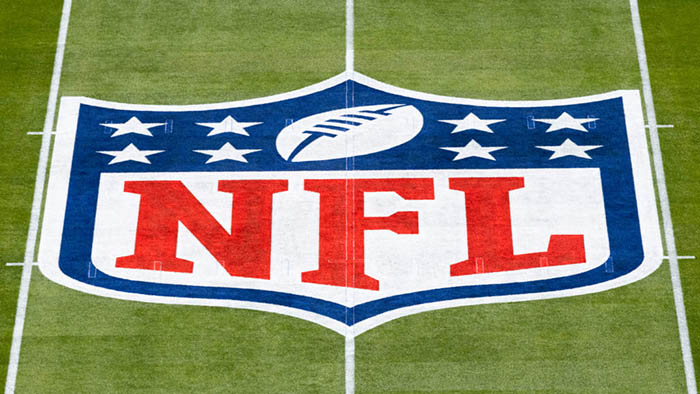 The NFL season usually begins with a three-week preseason in August and an 18-week regular season running from September. 32 teams are divided into two conferences: American Football Conference (AFC) and the National Football Conference (NFC). After a 14-team single-elimination playoff, the champion will be determined in the Super Bowl taking place in February.

The NFL 2022 preseason is currently in full swing with Buffalo Bills ranking the No.1 with the best defense on the field. While the 2023NFL regular season is about to kick off, the most common concern is where to watch NFL games live free and how to watch NFL games from anywhere. Want to learn more? Just keep reading to find all the answers!

How to Watch NFL on Online Streaming 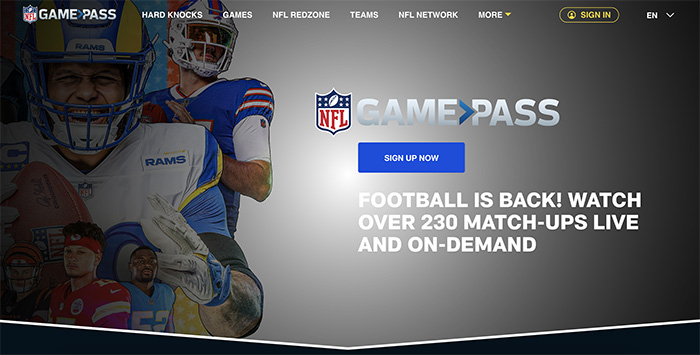 The NFL Game Pass International, also known as NFL+, is the official service to watch NFL games live. If you want to gain unlimited access to in-market games, playoff games, and all primetime broadcasts live and on-demand, then the NFL Game Pass is the best bet.

Official License: Authorized by the NFL Network, NFL Game Pass is the official license that allows you to watch NFL games live on mobile devices. You can watch NFL online free with the 7 days free trial.

Full Games & Whole Season: With 4.99/month, you can watch all 270+ NFL regular seasons and the 2023 NFL playoffs as well as the Super Bowl champion games live from the State Farm Stadium. 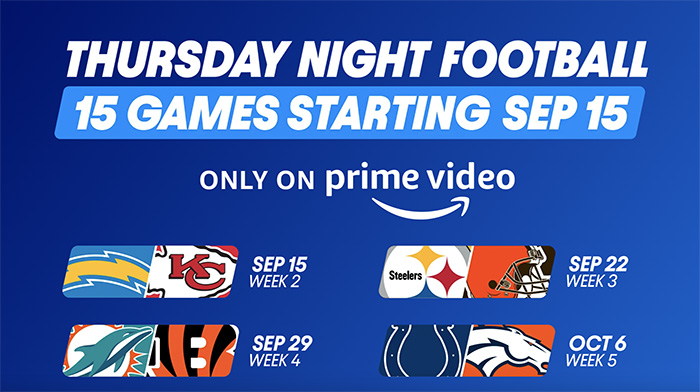 Amazon Prime Video is another service that lets you watch NFL games live. The platform broadcasted its first and only preseason matchup on August 25 when the San Francisco 49ers played the Houston Texans.

Easy to Access: Simply get the $8.99 monthly subscription and you can watch NFL games live. New users are eligible for a 30-day free trial to watch NFL online free. 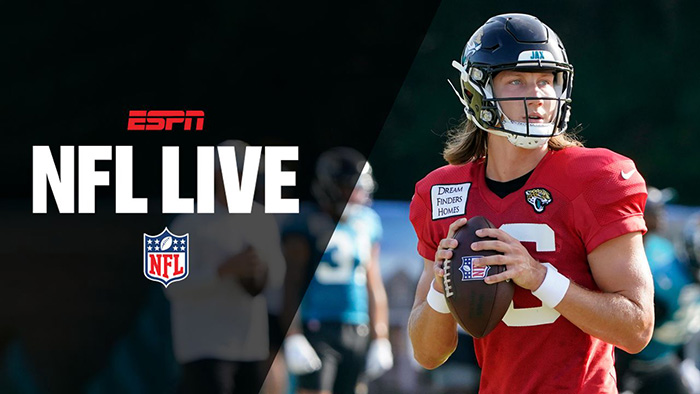 Cable services are still the home to NFL broadcasting, especially after the preseason. Starting from September 8, the 2023 NFL regular season games are spread between cable services Fox, CBS, ESPN, and NBC. To watch the NFL games all season long, you will need to have valid subscriptions to these cable TVs.

Mostly Cable TV Programs: For cord-cutters, these cable services can only be accessed via limited online streaming platforms such as YouTube TV, Sling TV, fuboTV, Hulu with Live TV, etc.

Watch NFL Online Free: You can watch NFL games live free with part of the streaming services, as they have free trials that allow you to watch NFL online free for a limited time.

Whether you are going to watch NFL games live with the NFL game pass, Amazon Prime Video, or cable services with streaming apps, there is always a problem that you can’t get around, that is, the geo-restriction. All these streaming services are regionally limited, which means users who live overseas will need to bypass the geo-blocks to access the services. For instance, you have to change the YouTube TV location to stream the ESPN channel successfully.

So how to watch NFL regardless of the geo-restriction? A VPN is always the best solution. With a powerful VPN, you can spoof your IP address and trick the apps into thinking you are located in the country/region that is eligible for NFL streaming. So of all the VPNs out there, which one can help you watch NFL games live fast and free? Just check out iTop VPN, the best streaming VPN on the block. Want to learn more? Just keep reading!

How to Watch NFL Live Steam With iTop VPN

Here are the main features that make it the best streaming VPN for NFL games. 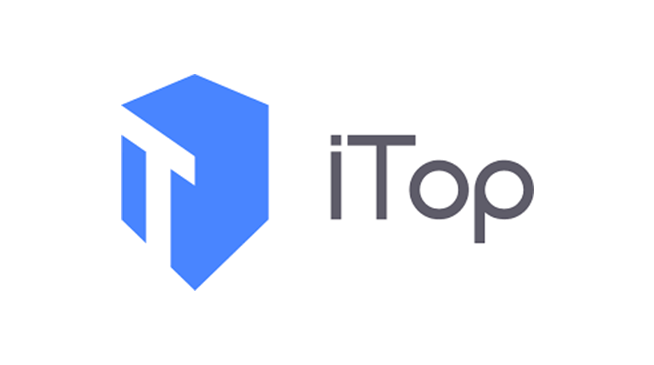 Better Security Protection: With the best-in-class encryption, iTop VPN allows you to stay safe online while streaming NFL games. Your sensitive data like billing information won’t be held by streaming platforms and collected to serve up third-party websites/ads campaigns.

Super Geo-spoofing & Location Masking: Equipped with 1,800+ servers in more than 100 locations worldwide, iTop VPN can help you spoof your IP address and watch NFL games live on any streaming platform. It’s the perfect IP changer that allows you to stream NFL games anywhere!

Anti-phishing: Streaming online is not as safe as you imagine while many potential threats are lying in wait. Yet with iTop VPN’s anti-phishing feature, you can block malicious content and enjoy the purest streaming environment as a whole.

Ad Blocker: Running ads on streaming services can be annoying, which can ruin your entire NFL streaming experience. But fear not, with iTop VPN’s built-in ad blocker feature, you can stay away from the ads and watch NFL games live without interruption.

Security Toolbox: Packed with a security toolbox that contains Browser Privacy, Split Tunneling, Kill Switch, and Security Reinforce, iTop is a safe VPN  that aims to provide the ultimate protection for your online activity.

Dedicated Streaming Servers: With dedicated streaming servers, iTop VPN allows you to have an ultra-fast and stable connection while watching NFL games live. For instance, you can enjoy your favorite NFL games with a specialized Amazon Prime VPN and say goodbye to annoying buffering!

How to Use iTop VPN to Watch NFL Live?

Step 2. Go to “All Servers” and select a US server. 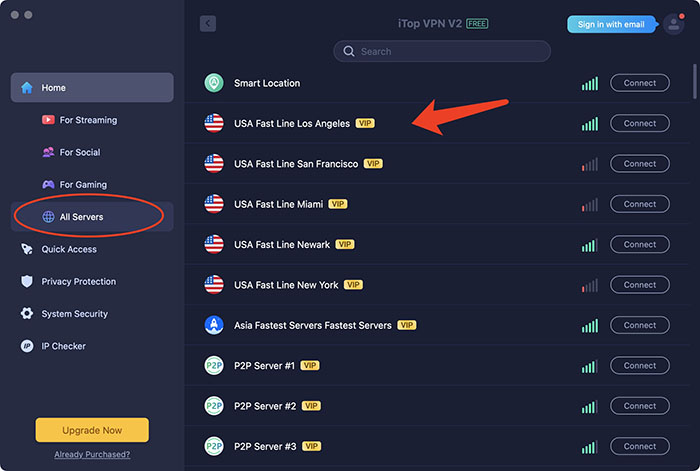 Step 3. Click on the “Connect” button to connect to the US server. 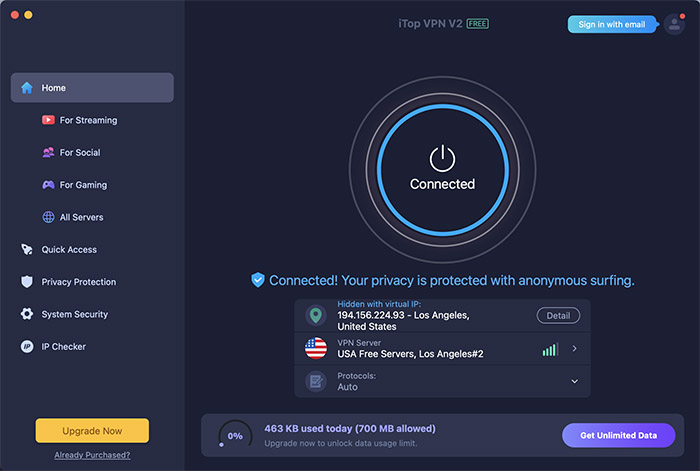 That’s it. As the best VPN for Windows/Mac/Android/iOS, iTop VPN is surely your No.1 choice to watch NFL games live fast and free!

As one of the most professional-level American football games on earth, the 2023 NFL season is the biggest sports event to watch out for this year. So how to watch NFL? Is it possible to watch NFL games live free? You should probably know the answer by now. Whether you live outside the US or want to stream the game in restricted areas, iTop VPN is your best choice to bypass the geo-blocks and watch NFL games live with the best video quality. What are you waiting for? Just get the iTop VPN and catch every good game online free now!