Hulu is an American subscription video on-demand service fully controlled by the Walt Disney Company and only available in the United States. It means that anybody outside the US can't access Hulu's complete content catalog because of the regional locks. Unfortunately, that includes Canadians as well. 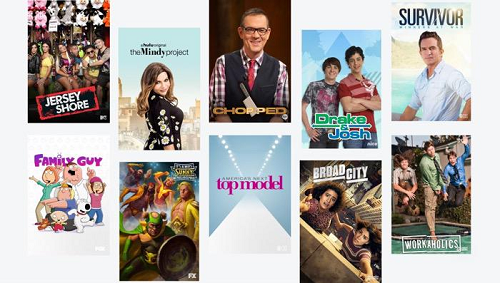 There are a handful of VPN providers in the current market, so how do you know which one is the best for Hulu? There concludes some aspects you can look into when selecting a VPN for Hulu in Canada.

Server speed & latency. Video streamings will consume a huge amount of data and bandwidth. Slow server speed and long latency undoubtedly will have a negative impact on the experience in accessing Hulu streaming content.

The number of server locations in the US. Since you need to watch Hulu which is restricted within the US, you definitely need a VPN provider that has multiple server locations across the US.

Simultaneous device connection. It is absolutely ideal if the VPN service can support different platforms such as Windows, iOS, macOS, and Android and support connecting to several devices at the same time as well.

Security and privacy. You want to stay anonymous and hacking-free all the time for sure so a VPN tool should use an advanced encryption algorithm to protect web traffic and guarantee a strict no-log policy.

Usability. A VPN should be easy to install and activate with a clean interface.

Price. Free VPN vs paid VPN. You can choose a VPN that offers a free & paid version that can meet users' basic needs and the cost is reasonable.

You May Like: Watch Rick and Morty Season 5 on Hulu with VPN >>

If you agree with the criteria mentioned above and decide to use a VPN to watch Hulu in Canada, you may have a question, which is can you get Hulu in Canada with a VPN? Here recommends iTop VPN. This fast and secure Hulu VPN service gives you instant access to Hulu and other your favorite American streaming platforms in Canada. It hides your IP adree and encrypts your network to protect you from hackers and any malicious attempts. Besides a VPN for Hulu or other streaming services, iTop VPN also gives you free access to music, social media, and gaming. It is the best free VPN for Windows, Android, and iOS. The macOS version is coming soon.

There will focus on its functions as a free VPN for Hulu in Canada here. What you will benefit from iTop VPN?

100% Free to Use in Canada. It is impressive that iTop VPN is free for Canadians to download, install and browse the internet. The free VPN for Windows provides enough bandwidth and data for your basic needs.

Fast & Stable Connect for Hulu. The average server speed of this tool is over 130 Mbps, which is far enough for any video streaming, downloading, or uploading. The connection is very stable and won't be cut frequently because of the long distance from the server location.

Total Private & Safe. iTop VPN is a safe VPN and guarantees they don't collect, save, or sell any user data. It employs military-grade encryption protocols to hide your identity and activities while you are watching Hulu in Canada.

A Massive Number of Servers. iTop VPN has over 1800 servers in over 100 locations, which include servers across the US and servers in California where Hulu is headquartered.

How to use iTop VPN step by step?

It is very easy to set up and use this free VPN for Hulu in Canada. The steps are applied to the Windows version. The mobile version may look slightly different, but the essentials are the same.

Step 2: Select a server in the United States, especially the one on the West Coast or in California in the list. 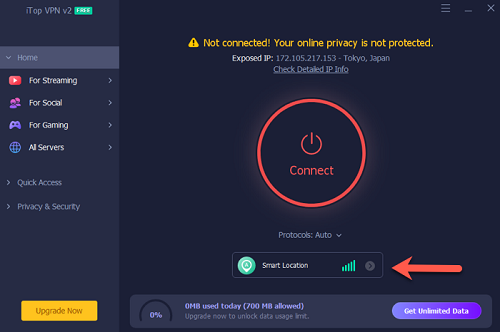 Step 3: Click on "Connect" and then start streaming Hulu in Canada. 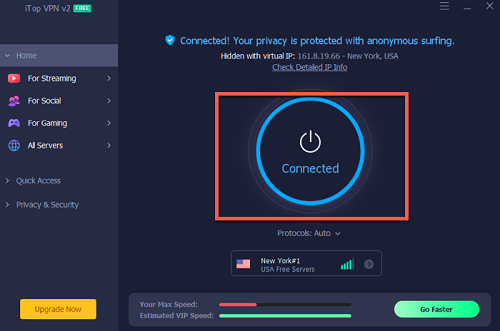 FAQ about Hulu in Canada

Hulu has its own original series as well as streams legacy shows from other networks. We offer a list of the best series you can watch on Hulu in Canada right now in 2022.

2. How Much I Should Pay If I Want to Use Hulu in Canada?

3. How Can I Use Hulu in Canada Without Payment?

You can sign up for one of the Hulu free trial offers. There are two offers - the Hulu with ads plan and the Hulu with no ads plan. You will have 30 days of free access to Hulu in Canada with a VPN. Or you can ask your friend to get a Hulu subscription for you.

4. Will Hulu Come to Canada One Day?

Even though the high demand worldwide, Hulu is only accessible within the United States. If you live in Canada, you will need a VPN for Hulu to unblock its entire library. iTop VPN, as one of the best global connect VPN providers for your streaming needs, is a free VPN for Hulu in Canada to help you watch your favorite shows and movies without geo limitation.