Need to use a VPN on Chrome? Access chrome VPN service with the iTop VPN Chrome extension freely & safely! Read the post for more details.

Chrome VPN is increasingly catching people's eyes with the unimpeded rise of Google Chrome to be a globally dominant web browse. One of the most important reasons for the need for Google Chrome VPN is the gradual recognition of online safety and privacy issues. Specifically, sites could collect and misuse your information that you might don't even know they have had access to when you surf online. Besides, if you want to game, stream, and socialize with the Google browser, Chrome VPN is also the most feasible solution to unlock website restrictions caused by censorship in different countries. 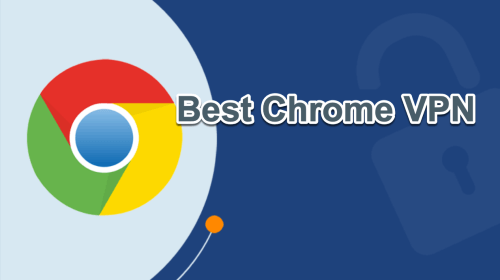 This post outlines how you can set up a free Chrome VPN on the Chrome browser for a secure, private, and unimpeded surfing experience, meanwhile illustrating common issues of using the Google Chrome VPN.

There are a lot of points you should take into consideration when choosing the best Chrome VPN. After carefully reading countless VPN reviews and comparing features offered by different VPN providers, in terms of overall performance, advanced features, VPN location coverage, speed, security strength, and necessarily, the value for your money, iTop VPN is ranked as the best Google Chrome VPN extension.

Take a look at some main features of it:

To protect your online privacy and security, iTop VPN creates an encrypted 'tunnel to exclusively send and receive traffic when you surf on Chrome browser. That's to say, hackers barely can intercept your online information, let alone decipher it. Over 1800 servers covered by iTop VPN can hide your IP address, making sure that your private information is under great protection.

iTop VPN can satisfy your needs if you are after a VPN extension Chrome for in-depth features and streaming support. It gives you full access to established platforms, such as Netflix, BBC iPlayer, and HBO Max for streaming; PUBG and Roblox for gaming; as well as WhatsApp, Telegram, Skype, Facebook, and Twitter for socializing.

As the best VPN Chrome for video streaming, iTop VPN pays more attention to enhancing video streaming speed. It enables a fast internet connection and unlimited bandwidth, which means you'll have a smooth download speed over of 100Mbps.

Considering that you may have more than one devices, iTop VPN allows up to 5 simultaneous VPN connections, including VPN for Windows, iOS, Android, and macOS devices. Not limited to be a Chrome VPN, it also supports mainstream browsers like Firefox, Edge, Opera, Safari, IE, Vivaldi, Waterfox, Pale Moon, and Chromium-Based Browser.

iTop VPN is also reputed for the advanced kill switch feature that can automatically cut down the local network immediately it detects unexpected network disconnection or other unsafe changes.

iTop VPN provides a 100% VPN free plan with multiple servers, fast speed, and powerful online protection, which makes it more competitive than other free Chrome VPN extensions that can only support basic functions and limited speed.

The advantages of iTop VPN go far beyond that, which would not be listed here one by one. All of these features make it the best free VPN for Windows, Android, iOS, and Google Chrome.

How to Set Up the Free Chrome VPN

Now you have seen the advantages of iTop VPN over other products. Then how should you set up it on your Google Chrome browser for safe, fast, and unrestricted surfing? No worries. This part will walk you through the setup process with a step-by-step and intuitive tutorial.

Step 1: In your Google Chrome browser, type in "Chrome Web Store" to search. Then open the Web Store and key in "iTop VPN" in the top left search box.

Step 2: Click on the iTop VPN result and choose "Add to Chrome". 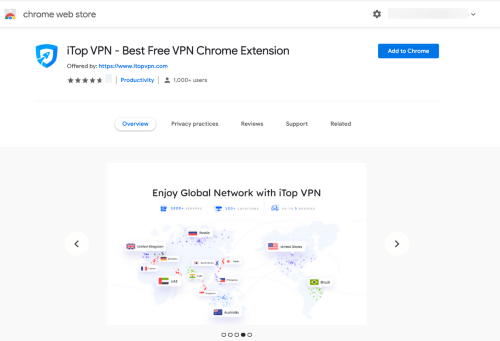 Step 3: Launch iTop VPN and you can visit almost all websites and platforms from over 100 countries without exposing your personal information and online activities. 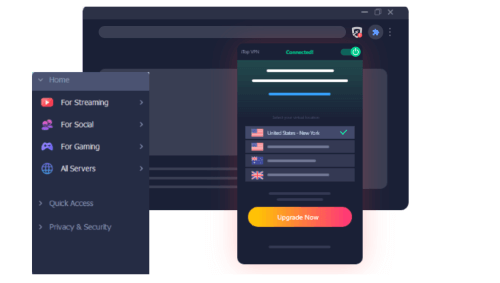 You can click on the puzzle icon at the upper right corner, then select iTop VPN and click on the pushpin icon next to it, so that you can directly start this Chrome VPN for protection every time you use Google Chrome. 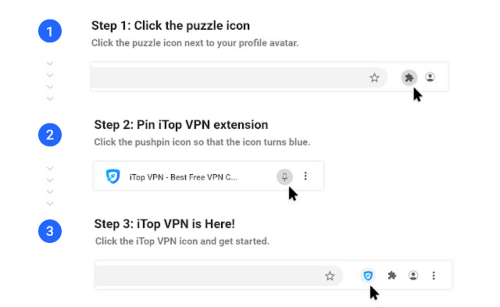 Because a Chrome VPN can not only protect your privacy from unwanted information tracking, monitoring, or even abusing but also grant you full access to most blocked websites and platforms with improved security and speed.

This iTop Chrome VPN is completely free plugin. But since it's totally free, the services provided would be less attentitive. So, about free VPN vs paid VPN, you can make your decision according to your own needs.

To enable free VPN on Chrome, all you have to do is to open your Google Chrome browser for access to the Google Chrome Web Store, in which you can search for "iTop VPN" and add it to your Chrome so that you can launch it on the upper right of your Chrome when you want anonymous surfing.

The quick answer is "Yes". In order to unblocking websites for you and protecting your data from being snooped on by the government or data corporations all the time, an app for your devices is still recommended, like a VPN for Android. Besides, since iTop VPN supports so many devices’ connections simultaneously, why waste the opportunities?

Yes. A VPN can hide all your browser activities, including your search history, bookmarks, search keywords, links clicked, and websites visited, as well as your IP address.

Unfortunately, no. Google does not have any built-in VPN for Chrome. But lucky for you, you still got plenty of Chrome VPN extensions to escort your online security.

With growing awareness of how sites collect and abuse our personal information and how government agencies strengthen internet censorship, using a VPN for browsers like Chrome VPN is becoming more and more important for privacy protection. iTop VPN is such a helper that unlocks most blocked sites meanwhile allows you to browse the internet anonymously. Besides the free Chrome VPN add-on, iTop VPN is also available for Windows PC, Android phone, iPhone, iPad, etc.