If you want to access and play Battlefield from anywhere you want, find out the best Battlefield VPN here with detailed instructions today.

Everyone who loves gaming and has a PlayStation is well aware of the Battlefield series of games. The game tells the story of a future where everything is destroyed by climate change and a collapsed economy. This multiplayer FPP shooter game started its journey with Battlefield 1942. The latest installment of this game i.e. Battlefield 2042 was released in November 2021.

People from all over the world love to play this game even in the countries where the game is banned. Because most of the players live far away from where the game's servers are located, they might face lagging problem while playing this game. A Battlefield VPN can eradicate all such issues. 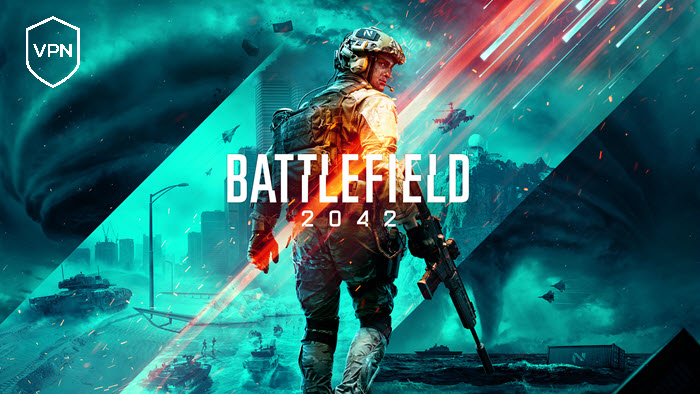 In this article, you will be briefed about the best VPN for Battlefield and how you can use them to have the best gaming experience.

Why Do You Need a Battlefield VPN

A VPN for battlefield can offer you the flexibility and freedom you want while playing the game. Here are the reasons why you need a battlefield VPN.

However popular the game might be, the battlefield is not available for everyone to play in every country. With a VPN, bypass geo-restrictions and play the game in any country even if it is banned in your region.

For some players, it might be hard to find nearby servers. This makes the game laggy and you might experience glitches. A battlefield VPN aims to eradicate that too.

When your IP address is shown to everyone, you might be at risk of data leakage and cyber-attacks. A VPN masks your original IP and lets you surf and play games anonymously. Hence, it keeps you secure and your information private.

Now, let’s check the 3 best VPNs for battlefield 2042 and other versions and generations of the game.

iTop VPN is the first and most effective battlefield VPN that can help you play the game smoothly. While playing battlefield using iTop VPN, you will face the lowest latency and it will ensure that you get a stable connection throughout the game. It reduces lag and improves your ping which helps you secure more kills and win more games. The features that make iTop VPN the best in the market for the battlefield are discussed below.

With its 1800+ servers over more than 100 locations around the world, you have everything in your grasp. If you are unable to play the game in your country or it causes problems and lags, iTop VPN is the perfect free VPN solution. Just choose any of the servers you want and enjoy smooth gaming with the freedom of choosing any server or location that works best for you.

Encrypt the Traffic to Avoid Data Leakage While Playing Battlefield

iTop VPN very efficiently masks your IP and encrypts the data logs going out from your device. Data leakage isn’t a problem that you will face while using it. You can keep your device, your battlefield account, and your private information secure at all times.

iTop VPN is a totally safe VPN, no virus, no malware. What’s more, it promises keeping no logs. Therefore, you don’t need to worry about your information will be recorded or leaked while ruing this free battlefield VPN.

iTop VPN is a cross-platform application available for Windows, macOS, iOS and Android devices. And, you can use it on up to 5 devices simultaneously.

First of all, please download VPN for PC, Mac or mobile devices depending on your device. And, install the program following the instruction.

Form the server list on the main screen, explore the gaming section and select any server you want for the battlefield. 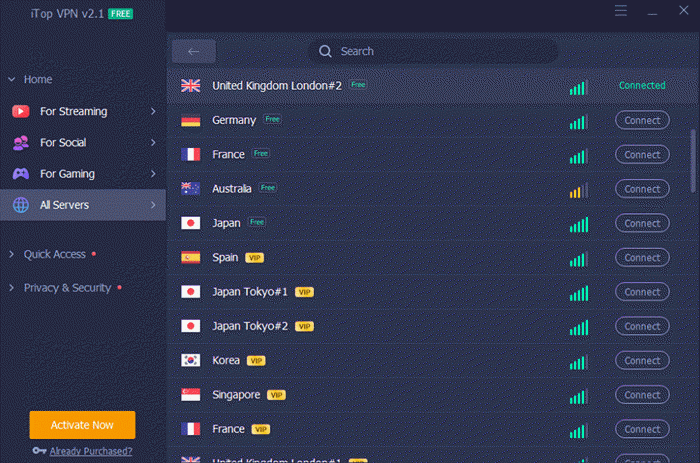 Now, after selecting a server, click on the big “Connect” button. That’s it you are connected to a private server now. 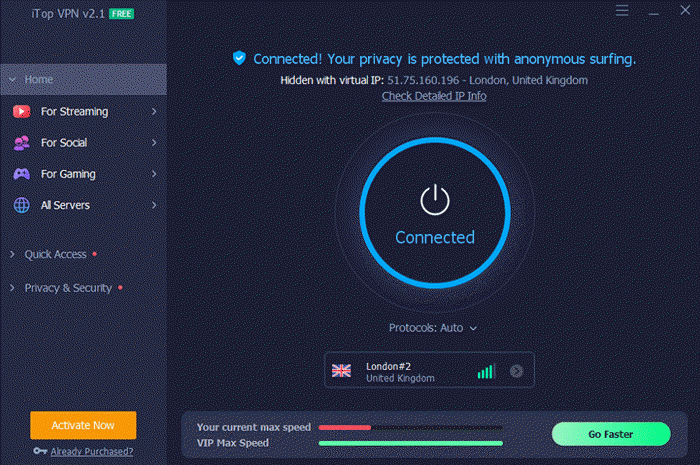 Launch the battlefield and start playing the game to have the best experience of your life.

NordVPN is a great battlefield VPN and is considered among the best. Although it can handle any game, the battlefield is where its services and servers excel. It is a paid VPN but provides value for money services.

With its vast network of servers spread around the world in over 60 countries, you can remove any geo-blocking that might render you unable to play the battlefield. Its super fast servers and security protocols take your experience to another level.

The most prominent features of NordVPN include:

With the NordLynx protocol along with an ad blocker and anti-virus features, you can play battlefield without having to worry about ads interrupting or viruses corrupting your device. Also, it ensures a fast and stable internet connection for your peace of mind. NordVPN is available for Android, macOS, Windows, and other operating systems.

All you have to do to play battlefield with this VPN tool is to download it on your PC, install it, and afterwards, connect it to a server. You can choose from a long list of servers and once you have, you can connect it to play the game instantly. Whichever server you choose, it is guaranteed that you will get a high speed connection. 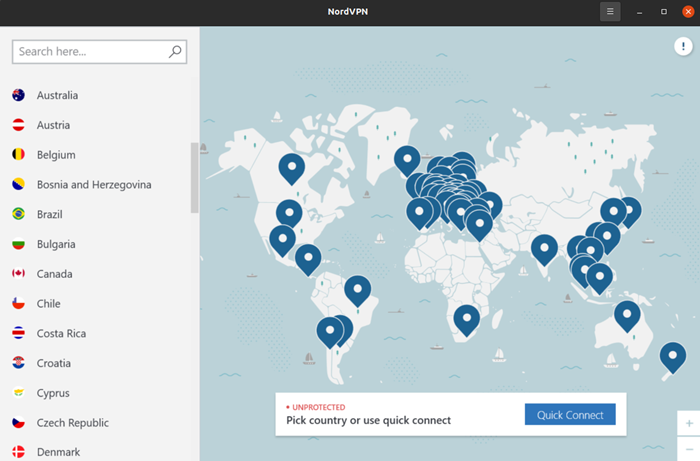 When you want to play the battlefield uninterruptedly and want to secure higher rankings for your matches, ExpressVPN should be among your top choices for a VPN with free trial service. It has a very vast network of more than 1700 servers situated in more than 95 locations all over the world. Depending on the speed of your internet connection, ExpressVPN enhances what your ISP provides to make sure you have the best gaming experience.

It masks your IP and even your internet service provider cannot find out what you are doing online. You can enjoy fast speed connections with minimum pings and lags to make each of your games count. With its servers, you can access and challenge other battlefield players in other countries. The 256-bit Advanced Encryption Standard keeps your connection secure and private at all times. 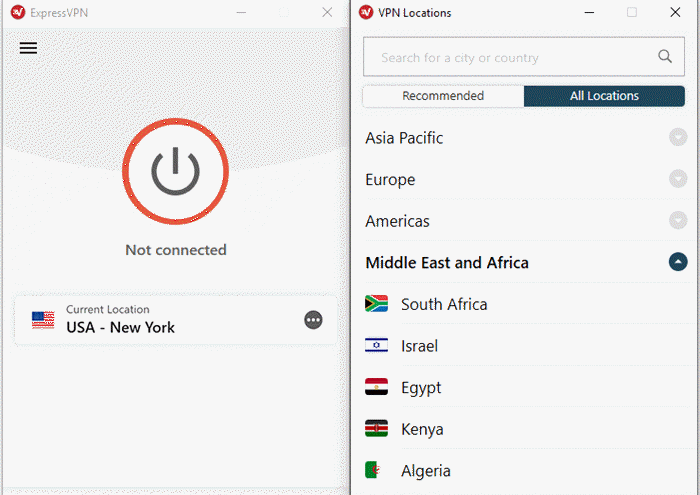 For gamers who love to play Battlefield 2042 and other generations of this game, geo-restrictions, ping, and lag might be problematic. The only solution to overcome geo-restrictions and enjoy smooth gaming, a battlefield VPN is necessary. When it comes to a battlefield VPN, iTop VPN, the best free VPN for PC, Mac and Mobiles, perfectly satisfy you. It has a huge network of 1800+ servers all around the globe. It ensures smooth gaming with no or minimum lags and the lowest ping possible. Also, during gaming, iTop VPN keeps your connection secure and doesn’t allow any data leakage. So, download and install iTop VPN now and enjoy the battlefield at its best.